Maharashtra Assembly Polls: Another prominent promise of the party includes making Maharashtra a $1 trillion economy and setting up a Rs 16,000 crore worth drinking water grid project in Marathwada 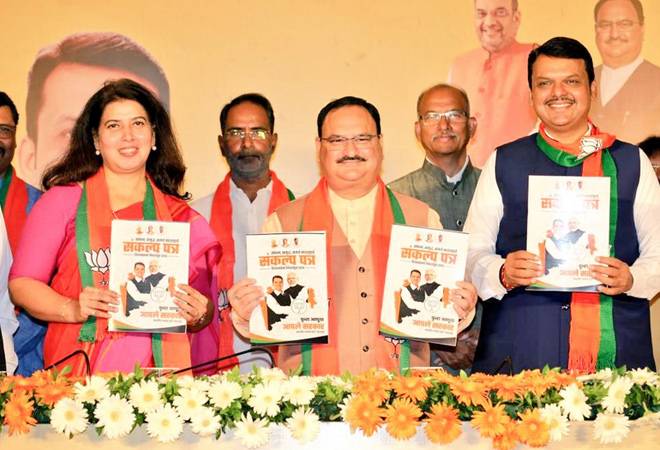 Maharashtra Assembly Elections 2019: The Bharatiya Janata Party, in its manifesto for the upcoming Maharashtra Assembly polls, has promised to provide 5 crore jobs in the next five years and houses for all by 2022. Another prominent promise of the party includes making Maharashtra a $1 trillion economy. The party has also said it would seek prestigious Bharat Ratna for social activists and social reformers Mahatma Jyotiba Phule and Savitribai Phule, and Indian independence activist Veer Savarkar.

The BJP aims to create a Rs 16,000 crore worth Marathwada drinking water grid project in the next five years if it comes to power in the state, it's manifesto stated.  Besides assuring to invest up to Rs 5 lakh crore in infrastructure projects in the state, the party has also promised to create a separate maintenance department to keep a tab of ongoing highway projects.

"We'll connect the entire Maharashtra state with internet through Bharat Net and Maharashtra Net. With the Prime Minister's Ayushman Bharat Yojana and Mahatma Phule Jan Arogya Yojana, we'll ensure no one is left behind. We are committed to giving Maharashtra an all-inclusive government," he said. Polling for all 288 Assembly seats in the state will be held on October 21 and counting of votes will take place on October 24.