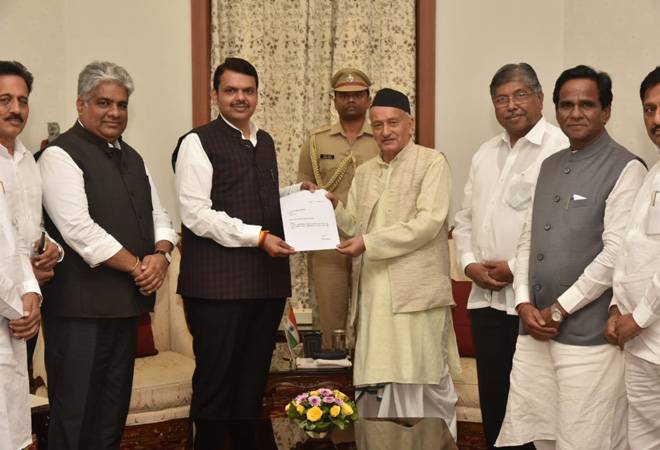 Maharashtra crisis Live Updates: In a dramatic turn of events, Devendra Fadnavis on Tuesday submitted his resignation to the Governor shortly after NCP leader Ajit Pawar resigned as the Maharashtra's deputy chief minister one day ahead of the floor test in Maharashtra state assembly. Shiv Sena chief Uddhav Thackray has been elected as the leader of Maharashtra Vikas Aghadi.

Hours after the Supreme Court ordered the floor test on Wednesday, Fadnavis announced his resignation in a media gathering at 3:30 pm on Tuesday.

The Supreme Court (SC) Tuesday ordered a live telecast of the floor test in Maharashtra assembly for Chief Minister Devendra Fadnavis to prove his majority on Wednesday. In a twist to Maharashtra political crisis, the top court directed an open secret ballot and said that a Pro-tem speaker should be appointed to conduct the floor test which must be concluded before 5 pm on Wednesday.

The apex court also directed Maharashtra Governor Bhagat Singh Koshyari to ensure that all elected members of the house are sworn in on Wednesday itself.  A bench comprising Justices N V Ramana, Ashok Bhushan and Sanjiv Khanna also said the entire proceedings has to be telecast live. Voting in the assembly shall not be on the basis of secret ballot, it said. The governor will also appoint a pro-tem speaker who will administer oath to the newly elected members.

Stay tuned to BusinessToday.in for Live Updates on political development in Maharashtra:

A resolution proposing Uddhav Thackeray's name as the Chief Minister candidate and leader of 'Maha Vikas Aghadi' passed unanimously by all MLAs.

NCP leader Nawab Malik said Sharad Pawar saheb had said that Uddhav ji will be the Chief Minister and Uddhav ji has also agreed to this, as per ANI report.

After taking oath, Kolambkar says the first session of new assembly will begin tomorrow. From 8.00 am onwards oath will be administered to the MLAs.

Kapil Sibal said they (BJP) knew they did not have the majority but they wanted more time. The Governor gave them 14 days, so obviously they all were hand in glove, they were hoping Courts will not interfere.

Congress President Sonia Gandhi has given her consent to the Common Minimum Program (CMP) of the three parties (Shiv Sena-NCP-Congress), CMP to be released after the joint meeting today, ANI reported. Modalities have been finalised between the alliance parties.

BJP MLA Kalidas Kolambkar will take oath as Protem Speaker in Raj Bhawan. Kolambkar says 'Oath of  MLAs to be administered tomorrow when the session begins'.

BJP MLA Kalidas Kolambkar to be Protem Speaker, he will take oath shortly in Raj Bhawan. Kolambkar says 'Oath of MLAs to be administered tomorrow when the session begins.' #Maharashtra (file pic) pic.twitter.com/IGjvgI8NAI

Kalidas Nilkanth Kolambkar is an eight term Member of the Maharashtra Legislative Assembly. He was elected from the Wadala assembly constituency of Mumbai, Maharashtra.

"I thank the Supreme Court of India. On Constitution Day, the court has saved the Constitution of India. They never had a majority. We will form a stable government, which works for full five years," Senior Shiv Sena leader Eknath Shinde told India Today TV.

"Ajit Pawar had to come back," he added.

Congress leader KC Venugopal said that there will be joint press conference of the three (Shiv Sena-Congress-NCP) parties and a meeting today evening. "In the meeting leader of joint legislative party will be elected, I think Uddhav ji will be elected, he said.

4:20 PM: This is a victory of constitutional democracy, says Congress leader KC Venugopal

Commenting on Devendra Fadnavis and Ajit Pawar resignation, KC Venugopal said that this is a victory of constitutional democracy. "They thought through horse trading they can make government. This is not only a failure of Devendra Fadnavis but also a slap on faces of their masters sitting in Delhi," he reportedly said.

"The damage they have done to our Constitution & the highest offices in the country, for their sole bid to grab power illegally, will take decades to heal," Patel said.

"The truth behind the minority which tried to hijack the public's chose has been outed. It is now clear that Chanakyanity in BJP means the abduction of democracy. Shri Devendra Fadnavis and Shri Ajit Pawar should apologise to the people of Maharashtra. His government was based on lies and defection which came crashing like a house of cards," Congress spokesperson Randeep Singh Surjewala said while taking a dig at the BJP.

4.10 pm: We don't have the numbers, says Devendra Fadnavis

Following Ajit Pawar's resignation as the deputy CM, devendra Fadnavis announced his resignation during a media address on Tuesday. Fadnavis in his address blamed Ajit Pawar for the crisis

3.50 pm: Don't want to do horse trading, so I am going to resign, says Devendra Fadnavis

"We formed the govt because a group of NCP came to us, but now we don't want to do horse-trading, so I am going to resign. I am sure now these 3 parties [ShivSena-NCP-Congress] will run the govt but I fear that this govt is going to bow down under its own pressure," Devendra Fadnavis to media

Devendra Fadnavis: The hunger for power is such that now Shiv Sena leaders are even willing to ally with Sonia Gandhi. #Maharashtrapic.twitter.com/8k4IKb9JHU

3.43 pm: Will work as the opposition party, says Fadnavis

3.41 pm: I will submit my resignation: Devendra Fadnavis

3.41 pm: We believed that the entire NCP party was with us, says CM Fadnavis

3.40 pm: Sena made a laughing stock of themselves, sats CM Fadnavis

3.39 pm: No promise made to Sena on rotational CM: CM Fadnavis

As Ajit Pawar stepped down as the deputy CM of Maharashtra on Tuesday, Congress took to Twitter to troll BJP.

NCP leader Jayant Patil Tuesday told reporters, "It's you from that I have come to know about the resignation of Ajit Pawar. I don't know about it, I would like to make a comment on it only after getting to know everything."

Ousted NCP leader Ajit Pawar has resigned as the Deputy Chief Minister of Maharashtra. This development came hours after the Supreme Court ordered floor test for CM Devendra Fadnavis to prove majority in the state legislative assembly. The court said the floor test must be conducted by 5:00 pm on Wednesday. Meanwhile, CM Devendra Fadnavis will hold a press conference at 3:30 pm on Tuesday.

"Today's verdict of the SC is a milestone in Indian democracy. Before 5 pm tomorrow, it will be clear that BJP's game is over. In a few days, there will a govt of Shiv Sena-NCP-Congress in Maharashtra," NCP's Nawab Malik tells ANI.

Following the SC's order for a floor test on Wednesday, NCP leader Jayant Patil tweeted and said that the apex court succeeded in protecting the constitutional values of the constitution.

"Satyamev Jayate, BJP's game is over," tweeted NCP's Nawab Malik after SC order for a floor test on Wednesday (November 27)

10.30 am: Senior Congress MPs have started arriving at Congress office to hold discussions on future cours of action in Maharashtra

The Shive Sena and NCP in their plea before the Supreme Court have urged the top court to restrain the Devendra Fadnavis government from taking major policy decisions. Their petition has also sought a stay order on Maharashtra Anti-Corruption Bureau's decision to close cases in the irrigation scam.

10.15 am: Maharasthra Assembly secretary said on Tuesday that the NCP has stated that Jayant Patil is the legislative party leader.

The Shiv Sena on Tuesday lashed out at the Maharashtra governor over the hush hush swearing-in ceremony of Chief Minister Devendra Fadnavis, saying while one Bhagat Singh went to the gallows for freedom, the other one "hanged" democracy in the darkness of night. An editorial in Sena mouthpiece 'Saamana' wondered what would be Governor Bhagat Singh Koshyari's stand on the letter of support submitted by the Sena-NCP-Congress for staking claim to form government after the combine paraded "162 MLAs" at a hotel here. "When we had given a clear indication that the Sena- NCP-Congress alliance has 162 MLAs, what was the basis on which Governor Koshyari invited Devendra Fadnavis and Ajit Pawar for swearing-in as chief minister and deputy chief minister, respectively, last week?" the Sena asked. (PTI)

The Shiv Sena, NCP and Congress paraded 162 MLAs on Monday night in a show of strength held at a luxury hotel in Mumbai. The MLAs at the event took an oath not to fall prey to any inducements by the Bharatiya Janata Party (BJP). "Maharashtra is not Goa and it is time to teach them a lesson," NCP chief Sharad Pawar said.

"A misinformation is being spread that Ajit Pawar is the NCP's legislature party leader who would issue a whip to all (NCP) MLAs to vote for the BJP (in floor test). It is being said that whoever defies the whip would lose his membership of the House," he added.

9.38 pm: Some opposition parties led by the Congress are likely to boycott the joint sitting of Parliament on Tuesday called to commemorate the Constitution Day and will hold a protest against the political developments in Maharashtra.

9.19 pm: A day before the Supreme Court rules on floor test for Maharashtra government led by Devendra Fadnavis whose swearing-in has been challenged by Shiv Sena- NCP-Congress combine, the three parties paraded 162 MLAs in a show of strength here.

9.00 pm: NCP chief Sharad Pawar told a gathering of MLAs that he would personally ensure that none of them loses membership for voting against the BJP during floor test in the Maharashtra Legislative Assembly.

7.32 pm: Hitting out at the BJP-Ajit Pawar government in Maharashtra, the Congress alleged that the only decision it has taken in "public interest" was to close corruption cases and demanded Prime Minister Narendra Modi to come clean on the issue.

5.32 pm: The Shiv Sena, the NCP and the Congress will "parade" 162 MLAs in a five-star hotel in Mumbai on Monday evening as a proof of their combined strength in the 288-member Assembly, senior Sena leader Sanjay Raut said.

4.24 pm: Vehement protests by opposition members, especially those from the Congress, in the Lok Sabha over the political crisis in Maharashtra forced adjournment of the House proceedings for the day, with Congress leader Rahul Gandhi dubbing the developments in the state as "murder of democracy".

Rupee vs Dollar: Rupee strengthens to 71.66 per dollar amid sustained foreign fund inflows