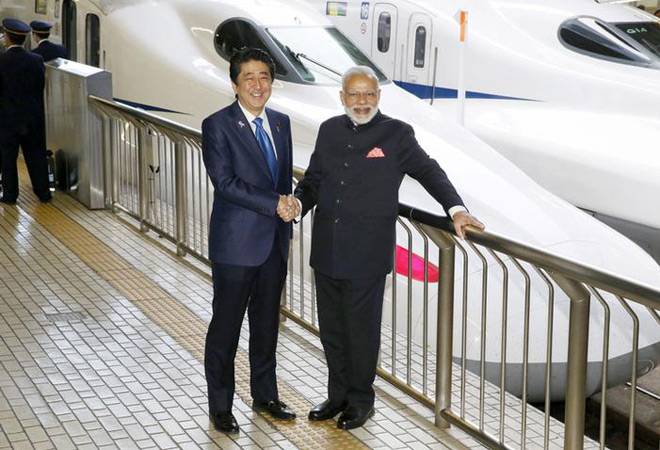 The debate over viability of India's first bullet train project on Mumbai-Ahmedabad route is back again. This time it started with an RTI reply from Indian Railways that revealed over 40 percent of seats on all the trains on this route go vacant. The RTI was filed by Mumbai-based activist Anil Galgali. The RTI reply showed that due to less number of passengers on the Mumbai-Ahmedabad section, Indian Railways-Western Division booked a loss of nearly Rs 30 crore in the last quarter.

Ironically, this is the same section - Mumbai-Ahmedabad - that has been chosen by the Central government for India's first bullet train run. However, the latest RTI revelation raises serious doubts over the viability of upcoming high-speed rail project on this route. Earlier in September, Prime Minister Narendra Modi and his Japanese counterpart Shinzo Abe had laid the foundation stone for India's first bullet train project in Gujarat.

Anil Galgali in his RTI query had asked about the seats occupancy on all the trains between Mumbai and Ahmedabad. To which, the Western Railways has reportedly responded saying that in the last three months, 40 per cent seats went vacant on the Mumbai-Ahmedabad route and 44 per cent on the Ahmedabad-Mumbai section. Western Railways Chief Commercial Manager Manjeet Singh informed the news agency IANS that between July 1-September 30, there were 32 mail/express trains on the Mumbai-Ahmedabad sector with a total seating capacity of 735,630 seats. However, only 441,795 seats were booked during the period, generating a revenue of Rs 30,16,24,623 against the total estimated expected income of Rs 44,29,08,220. Railways incurred a huge loss of Rs 14,12,83,597 in the this quarter.

According to the report, Shatabdi Express with a capacity of 72,696 seats sold only 36,117 during the July-September period on the Mumbai-Ahmedabad route and in the return direction of the total 67,392 seats, only 22,982 were sold. This train has turned out to be a loss-maker and the revenue of Shatabdi has plummeted during the last quarter, the report said.

All these figure takes us back to one moot question: Is the government's Mumbai-Ahmedabad route for the first bullet train project financially viable? While the government is hopeful that it will transform the Mumbai-Ahmedabad industrial corridor and bring economic development in the region, numbers suggest otherwise. The cost of Ahmedabad-Mumbai High Speed Rail Project is estimated to be Rs 1,10,000 crore. According to a study conducted by IIM-A, Ahmedabad-Mumbai bullet train will need to make 100 trips daily and carry 88,000-118,000 passengers per day to be financially viable. This figure could well be way above the total number of passengers travelling between the two cities on any given day.

However, in the same report, IIM- Ahmedabad said that the Mumbai-Ahmedabad corridor was a good choice for the first route as it connects the country's first and seventh most populous cities with significant economic development in the 500 km corridor between them. The Mumbai-Ahmedabad High Speed Rail or MAHSR will pass through Sabarmati, Anand, Vadodara, Bharuch, Surat, Bilimora, Vapi, Boisar, Virar and Thane.