Addressing the Rajya Sabha, PM Narendra Modi advocated electoral reforms and invited all factions to initiate discussions on 'one nation, one election' system. 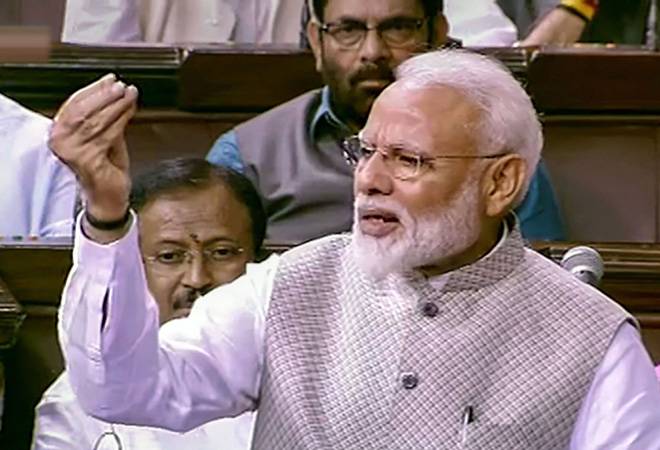 PM Narendra Modi talked at length about EVMs and how baseless the opposition against them. Photo credit: PTI

Prime Minister Narendra Modi bashed the Opposition's claims of tampering with EVMs during his note of thanks to President Ram Nath Kovind's joint address to the Houses. In his address, PM Modi said that blaming EVMs is a new disease.

"Questions are raised over EVMs, excuses are given. There was a time when we had two lawmakers in the Parliament. We were mocked. But we believed in our workers, our ideology, our voters, and we were prepared to work hard. We revived the party from such dismal times. We did not give excuses like polling booths got captured or something like that. But those who are incapable of accepting responsibility for a defeat pose EVM as an excuse," PM Modi said.

"Earlier, headlines after polls talked about the violence during elections. After the introduction of EVMs, the headlines today talk about how much voting percentage has increased in comparison to the last time." he further added.

PM Modi said that the Congress introduced the electronic voting machine (EVM) into the Indian electoral process, but now they are complaining about it after facing defeat. Almost every political party present in this House had the chance to win elections and come to power in the elections conducted using EVMs, he added.

"I have to say from my experience that you cannot digest victory, nor can you accept defeat. I do not think this is healthy. In India, in democracy, every political party has its own importance," PM Modi said.

Talking about electoral reforms, PM Modi also pointed fingers on the resistance against the 'one nation, one election' scheme. He also refuted claims that conducting General Elections and Legislative polls in one go will confuse the voters' mandate and harm the regional parties.

The Opposition has adhered to the meaning of opposition in letter and spirit, PM Modi said while speaking against the opposition to Aadhaar, digital transaction, GST, EVM and Bhim UPI. "The parties in Rajya Sabha who have tried to derail the initiatives by the elected government in the past five years were punished by the voters," he said.

Addressing the recent incident of mob lynching in Jharkhand, PM Modi said that the culprits should be severely punished, but the entire state should not be targeted. "Such incidents, be it in Jharkand, in West Bengal, in Kerala, we should have a single standard. Then only we can stop such violence. Then only will the instigators know that the entire nation and all political parties are one on this issue and such acts will not be tolerated," the Prime Minister said.