The share of GSP benefitted products in total exports from India to USA was 12 per cent, which was withdrawn with effect from June 5, 2019 If Trade Promotion Council of India (TPCI) - a trade and investment promotion organisation notified in the Foreign Trade Policy - is to be believed, India's fears of losing export earnings due to the withdrawal of duty free and concessional duty benefits under the Generalised System of Preferences (GSP)  programme of United States of America are completely misplaced.

The agency, citing numbers from the database of the United States International Trade Commission (USITC), shows that India's exports to USA on GSP withdrawn products registered 32 per cent growth in June as compared to the corresponding month the previous year. 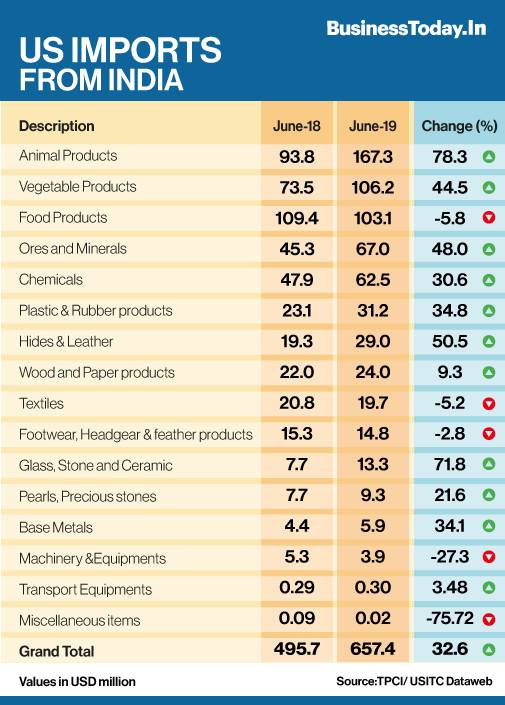 "This is a very interesting trend as out of $190 million value of GSP benefit claimed earlier, the growth has already covered $161.74 million month-on-month for June 2019 compared to last year; leaving a thin margin of $28.26 million," says Mohit Singla, chairman, TPCI.

"This is a clear indication that Indian products have the full potential to compete globally. TPCI is a strong advocate of the phasing of subsidies and reducing government support. The need is to incentivise sunrise sectors such as furniture and electrical, by creating a cluster-based mega ecosystem, which can churn export growth completely. The era of continuing fixation on labour-incentive sectors should be over, as growth in those sectors have already flattened, despite sustained support," he says.

Singla points out that exports of 952 items (products), including plastics rubber, base metals (aluminum), machines and equipments, transport equipments, hides and leather, pearls and precious stones showed an increase in the month of June 2019 compared to corresponding month in 2018.

The TPCI had earlier stated that the withdrawal of benefits would not make much difference to Indian exports as several of these products were intermediary inputs for US industry and helped in keeping the industry competitive. India was the largest beneficiary of the GSP programme for duty-free imports to the USA.

Also read: US to end preferential trade treatment for India from June 5; what it means and will it affect country?

Job creation should be top priority; even skilled people are finding hard to get jobs, says L&T's AM Naik