Pulwama terror attack: A day ago, a Chhattisgarh artist, Vinod Panda painted the Pakistani flag on the road along with anti-Pakistan slogans. Indian residents in US, UK and Australia also staged protest against the Pulwama attack. 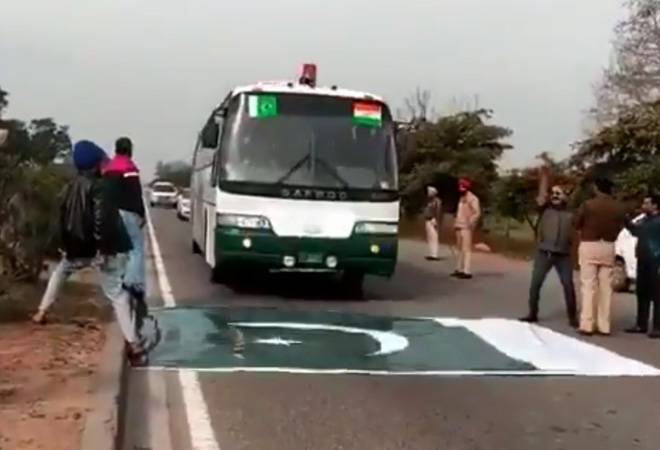 Following the devastating Pulwama terrorist attack on a CRPF convoy that claimed at least 40 lives, sections of people from across the country have been expressing their anger online as well as offline. Protest marches as well as candlelight marches have been carried across all parts of India. According to reports, more than hundred rallies were carried out in Delhi on Saturday alone. More recently residents of Raiyya, near Amritsar pinned the Pakistani flag on the road and made vehicles run over it. The assembled individuals also chanted slogans against Pakistan.

A video that has been making the rounds, tweeted by Ravinder Singh Robin, an independent journalist, reads: "Residents of Raiyya, near Amritsar forced Pakistan's Delhi Lahore bus to cross over Pakistani flag in protest against Pulwama Terror Attack. To register their protest they set ablaze the flag of Pakistan."

Residents of Raiyya, near Amritsar forced Pakistan's #DelhiLahore bus to cross over pakistani flag in protest against #PulwamaTerrorAttack. To register their protest they set ablaze the flag of Pakistan. pic.twitter.com/LRPFdDZodj

A day ago, a Chhattisgarh artist, Vinod Panda painted the Pakistani flag on the road along with anti-Pakistan slogans. Indian residents in US, UK and Australia also staged protest against the Pulwama attack.

The Cricket Club of India staged its protest by covering Pakistan PM Imran Khan's face. "See, CCI is a sports-club and we have photographs of past and present cricketers from all countries. We wanted to show, in our way displeasure on whatever is happening right now. It is mark of protest. We have covered it as of now but can't say right now if we would take it down," said CCI President Premal Udani.

On February 14, a convoy of CRPF jawans was attacked by a suicide bomber who rammed a vehicle laden with explosives. Militant group Jaish-e-Mohammed claimed responsibility for the attack.

Pakistan PM Imran Khan denied his country's involvement in the attack. "I am telling you clearly, this is naya Pakistan. It is a new mindset, a new way of thinking. We believe that it is in our interest that our soil is not used for carrying out terrorist attacks in other countries, nor do we want outsiders to come and carry out terror attacks here. We desire stability," he said, adding that if India had any actionable intelligence that a Pakistani was involved, it should reveal it. "I guarantee you that we will take action - not because we are under pressure, but because they [any individuals found involved] are acting as enemies of Pakistan," he said, reported Dawn.

Also read: 'You pick up a gun, you are dead': Indian Army says terrorists will be killed, blames Pakistan's ISI for Pulwama attack