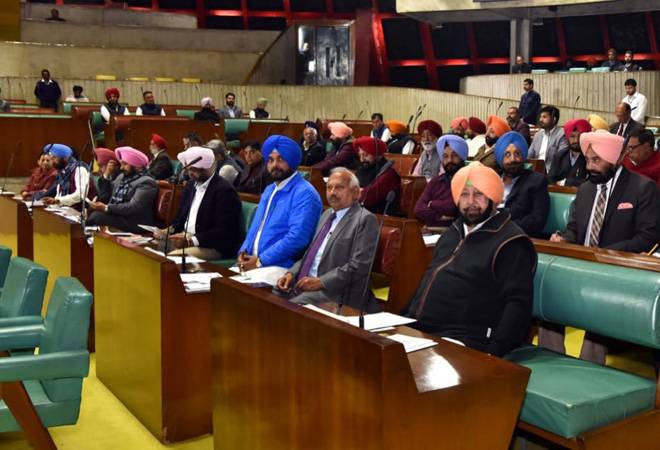 Chief Minister Captain Amarinder Singh-led Punjab government was forced to cut short Budget presentation as SAD leaders entered into the Well of the House demanding the resignation of Navjot Singh Sidhu over his remarks on the Pulwama attack.

In his Budgetary proposals, Manpreet Badal announced to cut petrol prices by Rs 5 per litre and diesel by Rs 1 effective from midnight. The Budget proposes to rationalise the VAT rates on petroleum products in a bid to give relief to consumers. The cut in prices of petrol and diesel were in consonance with neighbouring States, says Badal.

Inside the House, Manpreet Badal presented a budget of Rs 90,197 crore. FM highlighted that during the current fiscal, the Gross State Domestic Product (GSDP) of the state has increased to Rs 5,18,291 crore from Rs 4,70,137 crore in the last fiscal. Per capita income in the state rose from Rs 1.4 lakh in 2017-18 to Rs 1.5 lakh in the current fiscal, suggested media report.

The FM reportedly said crop burning incidents, responsible for severe air pollution in Delhi and northern India, has declined by 12.4 per cent. The government has allocated Rs 375 crore for stubble management, Rs 3,000 crore towards farm loan waiver and Rs 8,969 crore for power subsidy to farmers. Further, Rs 1,513 crore has been proposed for subsidised power to industry.

Speaking to media outside the House Monday, Sidhu said: "I stick to my stand. We must eliminate the root cause of terrorism. Terrorism destroys peace and divides the country. Those who committed this grave offence must be brought to justice. The punishment must act as a deterrent for generations."

"Who freed Azhar in 1990? Whose responsibility is it now? Our fight is with them. We want to ask why can't there be a permanent solution, why are soldiers dying?" he added.