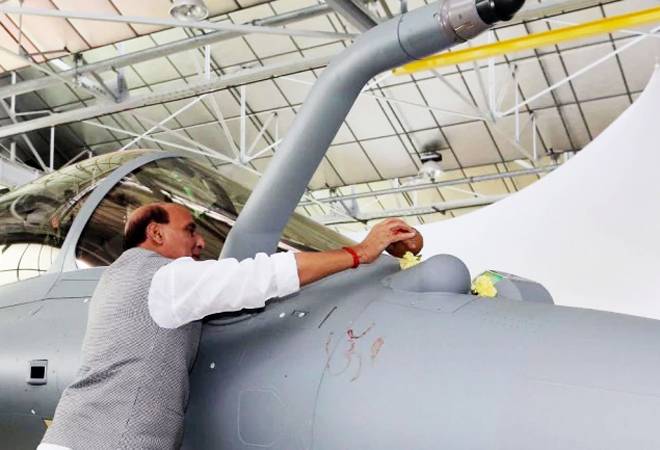 Rafale India Live Updates: The first batch of Five Rafale fighter jets just landed at the Ambala air base after a long 7,000 kilometers ride from France

The first batch of Five Rafale fighter jets just landed at the Ambala air base after a long 7,000 kilometers ride from France. The aircraft escorted by two Sukhois were welcomed by Indian Air Force (IAF) chief Air Marshal RKS Bhadauria who was present at the air base. Security has been beefed up in the villages adjoining the Ambala air base with Section 144 imposed which prohibits the assembly of four or more. Welcoming the jets, Defence Minister Rajnath in a series of tweets said that India can deter any threat now. He added that Rafale jets were bought only when they met the operational requirements of IAF.

Check out all the latest updates on the Rafale fighter aircraft arrival in India on BusinessToday.In live blog

The Touchdown of Rafale at Ambala. pic.twitter.com/e3OFQa1bZY

The Congress Rafale purchase would have ensured India receives 126 jets instead of BJP's 36.

108 Rafale jets would have been Made in India.

India would have received the Rafale jets by approx 2016

Cost of each Rafale jet would have been Rs. 526 crore.

We congratulate the Indian Air Force on receiving the Rafale jets.

The stark difference between the Congress & BJP deal reveal the BJP's scam:

I would like to add, if it is anyone who should be worried about or critical about this new capability of the Indian Air Force, it should be those who want to threaten our territorial integrity.

Rafale jets touch down at Ambala air base.

The first squadron of the fighter jets will be stationed at the Ambala Air Force Station, as it is one of the most strategically located bases of the Indian Air Force (IAF). The India-Pakistan border is nearly 220 km from there. Meanwhile, the second squadron of Rafale will be deployed at Hasimara base in West Bengal.

3.06 pm: The wait is over, Rafale jets to land at Ambala air base anytime now

2.56 pm: Breaking news: Five Rafale jets have crossed Agra and are slated to land at Ambala air base at around 3 pm

The jets entered the Indian airspace some time ago. 2.32 pm: Here is the audio message exchanged between the Rafale contingent and INS Kolkata

Rafale pilot: Many thanks. Most reassuring to have an Indian warship guarding seas

INS Kolkata: May you touch the sky with glory. Happy landings

Rafale leader: Wish you fair winds. Happy hunting. Over and out

The Defence Minister put out a tweet with "five Rafales escorted by 02 SU30 MKIs as they enter the Indian air space".

The five Rafales escorted by 02 SU30 MKIs as they enter the Indian air space.@IAF_MCCpic.twitter.com/djpt16OqVd

Ambala air base is all decked up and ready to welcome the first batch of five Rafate jets.

2.11 pm: Rafale jets to land at Ambala air base shortly

The countdown begins as the first five Rafale fighter jets can land at Ambala air base anytime from now.

Chief of Air Staff RKS Bhadauria will receive the first batch of five Rafale fighter jets at Ambala air base. The aircraft will carry RB series tail numbers, the initials of Air Chief Marshal RKS Bhadauria, who played an important role in negotiations between India and France for the mega deal.

The first batch of five Rafale aircraft landed at UAE's Al Dhafra base on Tuesday night as part of an overnight halt. The three single-seater and two double-seater aircraft had begun their journey on Monday from the French port city of Bordeaux. The jets will be inducted into the Indian Air Force's No 17 Squadron, also called the 'Golden Arrows'. India had signed a deal worth Rs 59,000 crore on September 23, 2016 to procure 36 Rafale jets from Frech company Dassault Aviation.

Indian naval ship INS kolkata welcomed Rafale jets as they entered the Indian airspace on Wednesday. The jets will land at the Ambala air base shortly.

The warbirds have already taken off from UAE, will touch down at Ambala air base in a short while.

The aircraft is capable of carrying a range of potent weapons, including missile maker MBDA's Meteor, and Scalp cruise missile. While meteor is a beyond visual range (about 150 km) air-to-air missile, the scalp is a long-range cruise missile with a range of 200 km. Both of these missiles can carry out deep strikes against enemy aircraft and targets on land.

For the deployment of the Rafale squadron, major infrastructure upgrades have been done at the Ambala airbase. The airbase currently has two squadrons of the Jaguar combat aircraft and one squadron of the MIG-21 Bison.

In September 2016, India signed an inter-governmental agreement with France to procure 36 Rafale jets at a cost of around Rs 59,000 crore. The purchase was made to further strengthen the Indian Air Force's combat capabilities. Of the 36 aircraft are arriving today.

11.50 AM: Ambala people enthusiastic about Rafale arrival in city

As per Haryana Home Minister and six-term MLA from Ambala Cantt Anil Vij, the people of Ambala are very enthusiastic and thousands would have come out on the streets to welcome the fighter jets before the touchdown had there not been a pandemic.

The arrival of Rafale jets comes amid escalating border tension between India and China along the Line of Actual Control. Although China claims air superiority over India, the induction of Rafale fighter aircraft into the Indian Air Force could give India much-needed confidence to take on China's J20 5th generation aircraft.

11.43 AM: Iran's military drill near UAE airbase where Rafales were parked

Iran's Revolutionary Guards on Tuesday launched a military drill closed to Al Dhafra in UAE and Al Udeid in Qatar. The two bases in the Middle East, housing US troops and French troops, went on high alert when three Iranian missiles dropped in the waters near the bases. Incidentally, India's five Rafale jets were parked at the Al Dhafra airbase at that time. The Rafales began their journey from the Merignac airbase in the French port city of Bordeaux on Monday.

The Rafales will be inducted into the Indian Air Force's No 17 Squadron, also known as the 'Golden Arrows'. The five Rafale fighter aircraft took off from UAE at around 11 am IST and reach Ambala by 2 pm today.

11.34 AM: PM May take part in induction ceremony later

The induction ceremony of the aircraft would be held later, in which Prime Minister Narendra Modi is also expected to take part as the chief guest. The aircraft would soon move out to another operational base for carrying out sorties.

Once the aircraft land in Ambala, the pilots led by Group Capt Harkirat Singh would be received by the air chief. Pilots will share their experience about flying from France to India and their training routines. The pilots will follow the coronavirus-related protocols.

11.30 AM: Water salute to Rafale fighters

Water salute to be given to five Rafale fighter aircraft after their landing at the Ambala air base. Air Force Chief Air Chief Marshal RKS Bhadauria to be present at the air base.