Gandhi did not hold back any punches and said, "Slap as many defamation suits as you want, but the truth remains that just as demonetisation was done to help the prime minister's crony capitalist friends, the Rafale deal was done to benefit Anil Ambani's group". 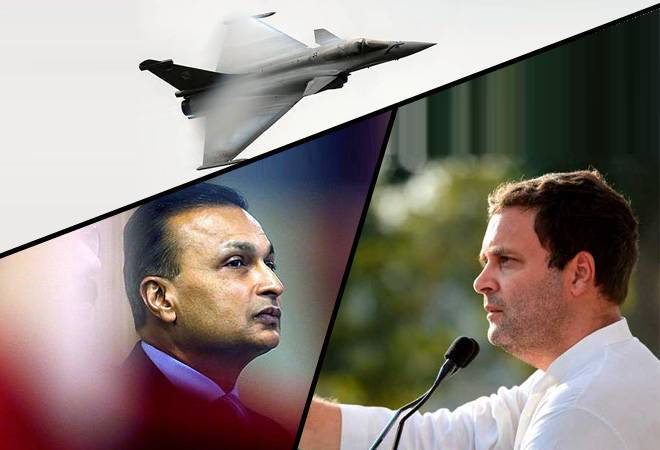 A day after Congress president Rahul Gandhi trained the guns on Prime Minister Narendra Modi over the controversial Rafale deal in a press conference, he has taken to Twitter to launch a fresh attack. "Globalised corruption. This #Rafale aircraft really does fly far and fast! It's also going to drop some big bunker buster bombs in the next couple of weeks," Gandhi tweeted this morning.

The tweet also referred to a story by The Indian Express claiming that Anil Ambani's Reliance Entertainment had signed a deal to produce a film with actor Julie Gayet, then French President Francois Hollande's partner, just two days before the MoU for Rafale aircraft was signed. "Modi Ji please tell Anil, there is a big problem in France," Gandhi's tweet added.

Yesterday, at the press conference, Rahul Gandhi had read excerpts from the joint statement by Modi and Hollande that had been issued in Paris in April 2016 and straight up accused the Prime Minister of lying.

"The two leaders agreed that the aircraft and associated systems and weapons would be delivered on the same configuration as had been tested and approved by Indian Air Force," Gandhi had said, quoting the joint statement, and added that the PM is "saying something else" now. "It is clearly written here that the configuration is going to be the same. So, the man is lying," Gandhi said.

The Congress leader further questioned why a fighter jet worth Rs 520 crore was bought for Rs 1,600 crore. He even challenged the Modi government to form a Joint Parliamentary Committee (JPC) to scrutinise the Rafale deal.

According to media reports, Gandhi also took on the Rs 5,000 crore defamation suit filed by Reliance Defence, Reliance Infrastructure and Reliance Aerostructure - all belonging to the Anil Ambani-led Reliance Group - against the Congress-owned 'National Herald'. The civil suit claimed an article published in the newspaper regarding the Rafale fighter deal was "libellous and derogatory".

At the press conference, Gandhi did not hold back any punches and said, "Slap as many defamation suits as you want, but the truth remains that just as demonetisation was done to help the prime minister's crony capitalist friends, the Rafale deal was done to benefit Anil Ambani's group".

He added that Ambani had never made aircraft and had floated his defence firm "only few days" before the Rafale contract was signed. "On the other hand, there is the HAL (Hindustan Aeronautics Limited), which is making aircraft for 70 years. It has no debt. There are thousands of engineers who want to work," Gandhi said, adding, "What is the deal between Anil Ambani and Prime Minister Narendra Modi".

To remind you, Rafale is a French twin-engine multi-role fighter jet designed and built by Dassault Aviation. Rafale jets are considered to be one of the most potent combat jets globally. India and France signed a deal worth 7.87 billion euros (Rs 59,000 crore approximately) on September 23, 2016, for 36 Rafale jets. The delivery of the aircraft will start from September 2019.

Finance Minister Arun Jaitley, who recently got back to North Block after recovering from his kidney transplant, has countered Gandhi's claims on Twitter. "Any issue diversion by @RahulGandhi on my Rafale questions, will not wipe out his falsehood on Rafale," he tweeted yesterday. In another tweet he claimed that "The fully weaponised Rafale air craft's 2016 price is 20% cheaper than the 2007 offer. This is what the 2015 statement of the PM and the French President refers to as 'on terms better than the 2007 offers'."

But the Congress party is unlikely to let the Rafale deal controversy die out in a hurry in the run up to general elections next year.