RCEP: Who said what on India's exit from world's biggest trade deal

While BJP says the trade deal would have hurt livelihoods of Indians, the Congress claims its "forceful opposition" ensured the BJP backs out from bartering the interests of farmers and small businesses 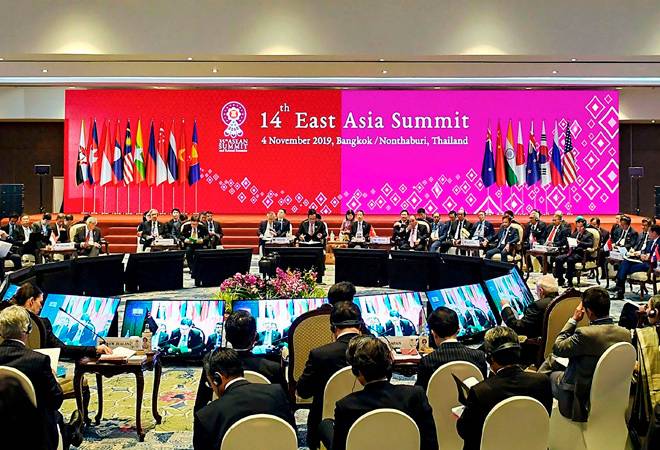 Both BJP and Congress are claiming 'victory' over India's exit from RCEP.

India will no longer be a part of the mega RCEP trade deal, as its concerns around imports, especially from China, were left unaddressed. The External Affairs Ministry has said under the current circumstances it's not proper to join the 16-nation trade deal. The BJP has hailed it as a victory for India, saying the proposed deal would have hurt livelihoods of all Indians. The Congress, however, said its "forceful opposition" ensured the BJP backs out from bartering the interests of farmers and small farmers. Here's what BJP and Congress leaders said on India's exit from the world's biggest trade deal.

PM Modi said the present form of the RCEP Agreement did not fully reflect the basic spirit and the agreed guiding principles of the RCEP. He also added that India was looking at greater integration through the trade deal and had made efforts in that directions from the very beginning. "India stands for greater regional integration as well as for freer trade and adherence to a rule-based international order. India has been pro-actively, constructively and meaningfully engaged in the RCEP negotiations since inception. India has worked for the cherished objective of striking balance, in the spirit of giving and take," Modi said.

Also read: RCEP trade deal: What's next after 15 nations decide to go ahead without India

Union Commerce and Industry Minister Piyush Goyal congratulated the PM for "his bold and courageous decision to not join RCEP". He said it was against India's economic interests and national priorities. "India has consistently stood its ground to uphold our demands particularly over-controlling trade deficit, stronger protection against unfair imports and better market opportunities for Indian goods," he added.

It will ensure support to farmers, industries: Amit Shah

Union Home Minister Amit Shah said India's decision to not sign RCEP was a result of the PM's "unflinching resolve to ensure national interest in all circumstances". "It shall ensure support to our farmers, MSMEs, dairy & manufacturing sector, pharmaceutical, steel & chemical industries," he said.

Union Finance Minister Nirmala Sitharaman said significant outstanding issues remained unresolved at the RCEP. "Recall how in 2014 with a sense of urgency, PM took the lead to get the Peace Clause in perpetuity on the #WTO #Bali Agreement of 2013. A clear & decisive call in India's interest, both then& now," she said.

India did not bow down to global pressure: JP Nadda

Congratulating the PM, BJP Working President JP Nadda said India did not bow down to global pressure and gave away its economic interests unlike previous Congress-led governments, which he said opened Indian market through "weak FTAs". "He (Modi) has always kept in mind the interest of stakeholders including farmers, dairy sector, manufacturers & MSMEs," he added.

The victory of millions of farmers, small businesses: Congress

The Congress party said a strong opposition had resulted in the BJP government rolling back its decision on the RCEP deal. "This is the victory of millions of farmers, dairy producers, fishermen and small and medium businesses who would have been disastrously affected with this agreement," the party said.

A win for all those protecting national interests: Surjewala

Congress chief spokesperson Randeep Singh Surjewala said it was a win for all those protecting national interests. "As BJP and Amit Shah indulge in fake credit seeking today, let them remember that Congress' forceful opposition made them back down," he claimed.