This is the second time BMS is opposing the policy moves of the re-elected NDA government. Last week, the organisation had opposed the government's plans to speed up the enactment of Labour Codes. 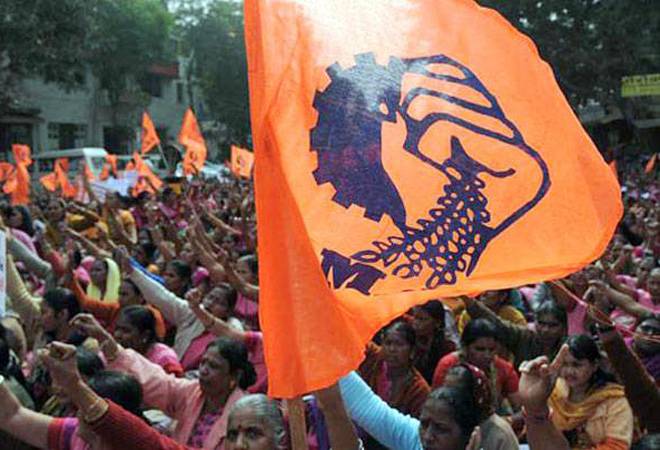 Bharatiya Mazdoor Sangh (BMS), the trade union affiliate of the ruling party BJP's ideological mentor Rashtriya Swayamsevak Sangh (RSS), has called for a nation-wide campaign to resist the disinvestment plans of Narendra Modi government. This is the second time BMS is opposing the policy moves of the re-elected NDA government. Last week, the organisation had opposed the government's plans to speed up the enactment of Labour Codes.

On disinvestment front, the trade union's Public Sector National Coordination Committee (PSENC) has decided to organise a nationwide 'Jagaran Abhiyan' (awareness program) on "Save Public Sector" during the week from 1st to 7th September 2019 by organising meetings, dharnas and processions. A national convention of PSU employees is also planned on November 15th in Delhi.

The PSENC decision was taken in the backdrop of the government think tank NITI Ayog listing 92 Public Sector Undertakings for disinvestment, states Girish Chandra Arya, Deputy In charge of PSENC.

The BMS convention will prepare a policy document on the role of PSUs in nation building, release a charter of demands of PSU workers and declare future agitation programme, Arya says.

The organisation is planning to organise industry wise seminars, a roundtable discussion of trade unions, management and experts during July- August 2019. "At the national level, meetings will be held with policymakers and the government. Further, parliamentarians and other dignitaries will be contacted as a part of mass contact programme," Arya says.

Last week, BMS had expressed serious objections on some of the provisions of the Labour Codes and wanted it to be rectified before it is sent for the approval of the Cabinet or Parliament. It has totally rejected the Industrial Relations Code stating that if considered in the current form, it will curtail many of the existing rights of the workers. The provision to allow the government to decide the criteria of office bearers of trade unions,  restricting the right to strike, allowing arbitrary dismissal of workers, excluding apprentices, etc. were some of the changes that were opposed. On the Labour Code on Occupational Safety and Health, and Working conditions (OSH & WC Code) also BMS had picked holes. The organisation complains that the draft Code has not taken care of many of the burning issues while codifying the laws like the Contract Labour Act, Factories Act, journalists law, transport workers law etc.

"The safety provisions are diluted in many units. The code covers only a section of workers and puts threshold limits on coverage, which is against the spirit of Codification. Trade unions are not properly represented in the Safety Board. Inspector system is withdrawn and is replaced by the facilitator, which is against ILO mandate. Provisions on working hours, leaves and allowances are diluted. There are innumerable laws related to working conditions that are omitted from its ambit," Saji Narayanan, President, BMS says.

The concerns of BMS are reflective of the difficulties Modi government will have to overcome to go ahead with their policy priorities.

SP MP refuses to say Vande Mataram during oath-taking in Lok Sabha; says it's against Islam