Reliance Industries chairman Mukesh Ambani, speaking during the event, said Reliance Jio would be present in every single village of the state by the 2018-end. 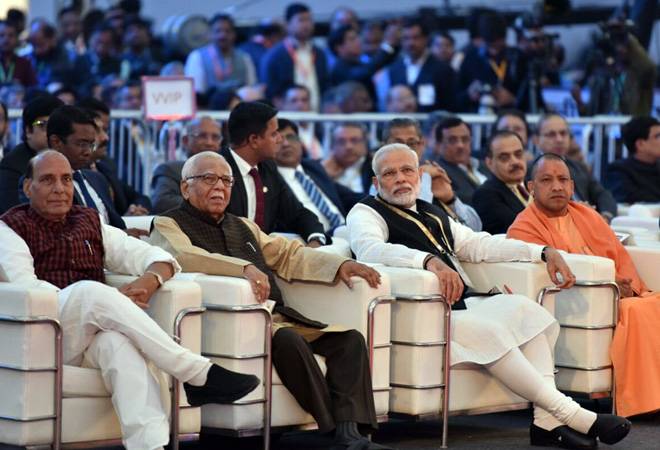 Prime Minister Narendra Modi on Wednesday inaugurated the two-day 'UP Investors Summit', which is in line with the summits held by states like Gujarat (Vibrant Gujarat) and Maharashtra (Magnetic Maharashtra Summit) to attract potential investors. While inaugurating the event, PM Modi said the foundation of UP has been made, and that it's time to build it a magnificent state.

Reliance Industries chairman Mukesh Ambani, speaking during the event, said Reliance Jio would be present in every single village of the state by the 2018-end. He also promised to invest over Rs 10,000 crore in the state through Jio in the next three years, saying contribution to UP's development is his "patriotic duty". Other top industrialists like Gautam Adani, Anand Mahindra, Subhash Chandra, N. Chandrasekaran, Kumar Mangalam Birla and Shobana Kamineni will also speak during different sessions.

The UP Investors Summit is the first such event to be held by the Yogi government. Over 5,000 delegates are expected to attend the event while over 100 speakers will address the gathering. The summit will bring together various stakeholders to find better investment opportunities in the state. Apart from government and major business heads, representatives from Mauritius, Japan, the Netherlands, Finland, Czech Republic, Thailand and Slovakia will take part. Business Today brings you all the latest updates on the two-day event.

3.30pm: Adani Group will invest Rs 35,000 crore in the areas of logistics, solar power, roads and agriculture in UP in the next five years, says group chairman Gautam Adani. "Almost 17 per cent of the total population of the country lives in Uttar Pradesh...the development story of the country cannot be written without the state," says Adani.

Glad to have been part of the #UPInvestorsSummit. Hon'ble Chief Minister @myogiadityanath, it is our commitment to stand with you on your journey of transforming Uttar Pradesh into a progressive and industrialized state. @InvestInUp

3.09pm: UP has bigger population than many European and African countries and has enormous potential. Hence UP should compete with countries not with states, says Mahindra and Mahindra chairman Anand Mahindra.

Some years ago,there was only one word to describe Lucknow city: Dirty.
Amazed to see its transformation into a clean city today.I asked if this was due to the investor summit..My local colleagues assured me it was not.They said it has become one of India's most liveable cities!

I congratulate the Uttar Pradesh Chief Minister Shri @myogiadityanath on successful inauguration of the first ever UP Investors Summit in Lucknow. @InvestInUp

In his inspiring inaugural address PM Shri @narendramodi gave a comprehensive account of his deep understanding about Uttar Pradesh. He has now envisioned a Trillion dollar strong #NewUttarPardesh which will successfully fire the growth engines of #NewIndia.

1.25pm: The Aditya Birla Group is working in 400 villages under the corporate social responsibility, says Birla, adding that his mother, who was a teacher at the local IT college, was born in UP only.

1.20pm: Aditya Birla Group Chairman  Kumar Mangalam Birla says the group will invest over Rs 25,000 crore in finance, cement, and chemicals in UP over the next five years.

1.00pm: The UP CM says the government is making Purvanchal and Bundelkhand expressway that will be connected to industrial corridors.

12.40pm: Mukesh Ambani says coming to UP is a patriotic duty for him. "Because India cannot rise to its full potential without the rise of 22 crore people of UP. Today, UP is not only rising, but it wants to race ahead. And when UP starts running, no power on earth can stop our country from becoming a global economic power."

12.29pm: "Uttar Pradesh has values and virtues, but it also needs value addition," the PM Modi says lauding the new policy 'One district one product' of the Yogi government and said that it could prove to be the game changer for the state.

12.21pm: The Prime Minister says it requires policy, planning , performance to bring progress and both Chief Minister Yogi Adityanath and people of the state are ready to give "super hit" performance.

The Prime Minister has begun his address at the UP Investors Summit. https://t.co/nNpo5XLc8Ypic.twitter.com/jIL5tx7uoR

12.15pm: Addressing the gathering at the summit, Prime Minister Narendra Modi says the government would make a defence industrial corridor in the Bundelkhand region to bring development in one of the most backward regions of UP. "One of the two defence industrial corridors mentioned in the budget, one is proposed in the Bundelkhand region of the state which will bring an investment of Rs 20,000 crore and generate employment avenues for 2.5 lakh people."

Will be in Lucknow today, to take part in the UP Investors Summit, which will showcase the rich potential of UP to attract top quality investment. Under CM @myogiadityanath Ji, the state's progress journey has got a strong impetus. @InvestInUp