Titled "4 More Years", the 107-second video starts with footage of Modi and Trump walking hand-in-hand at the NRG Stadium in Houston during the Indian prime minister's visit to the US last year, amidst 50,000 cheering supporters 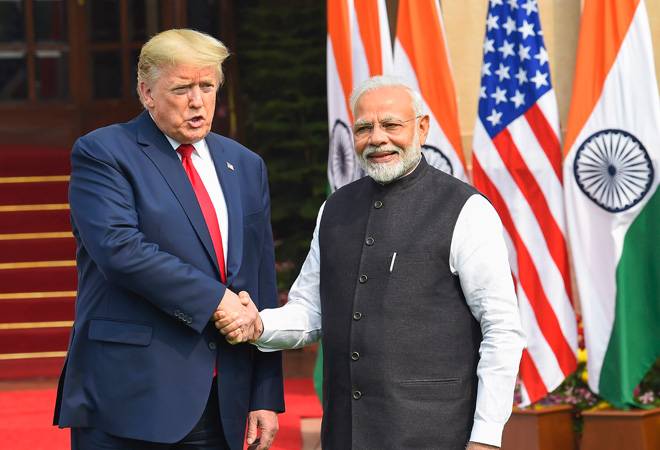 A Republican campaign video that includes visuals from the two historic rallies of President Donald Trump and Prime Minister Narendra Modi in the last one year -- "Howdy, Modi!" and "Namaste Trump" -- is making waves in the US ahead of the November 3 Presidential election, particularly among Indian-Americans whose votes may be the deciding factor in some of the battleground states.

Titled "4 More Years", the 107-second video starts with footage of Modi and Trump walking hand-in-hand at the NRG Stadium in Houston during the Indian prime minister's visit to the US last year, amidst 50,000 cheering supporters. In the background, Modi is heard saying, "He needs no introduction. His name comes up in almost every conversation. The President of the United States of America, Mr Donald Trump."

The video then cuts to the two leaders, along with US First Lady Melania Trump, waving at a massive crowd in Ahmedabad during the Namaste Trump event in February this year. The video ends with Trump pledging American loyalty to India. "America loves India. America respects India. America will always be faithful and loyal friends to the Indian people," Trump is heard in the video.

Indian-American psychiatrist Dr Maya Puri said, "When I first saw the "4 More Years" video, it sent chills down my spine. I had a visceral reaction to it. I literally wanted to stand up and cheer. It brought tears to my eyes. The "4 More Years" video was released by the Trump Campaign during the Republican National Convention last month.

"It (the video) really speaks to me emotionally as an Indian, as an American, as a Trump supporter, as a patriot, and just on a human level. It just packs a punch and hits you in the gut -- in the best possible way of course! I don't recall being so moved by a one-and-a-half-minute video ever before," said Dr Puri.

Republicans are excited about the video's popularity, considering the effect it could have on some of the battleground states. The swing states of Michigan, Pennsylvania, and Ohio are bastions to neither the Republicans nor the Democrats and a solidified base of Indian-American votes could be a deciding factor in the presidential election.

President Trump and Vice President Mike Pence will be challenged by Democratic Party presidential candidate Joe Biden and his Indian-American running mate Kamala Harris in the November presidential election. Other than being present on all major social networking sites and video-sharing platforms, the video has been shared by national chair of Trump Victory Finance Committee 2020 Kimberly Guilfoyle and the president's eldest son Donald J Trump Jr.

"The power of friendship between these two world leaders is truly awe-inspiring. It's something that I would strongly recommend every Indian and non-Indian to watch for themselves to have that 'feel-good' experience which I truly think is good for the soul," said Dr Puri.

"He has done more for Indian-Americans than any other president in our history. He has forged a very special relationship with Prime Minister Modi and now we have the two largest democracies united. This is a terrific video and I fully support President Trump for another four years!" said Parameswaran, who is a member of President Donald J Trump's Advisory Commission on Asian Americans and Pacific Islanders (AAPI).

Sridhar Chityala, a member of Indian Voices for Trump, said the video is impactful and captures the strong leadership of the two heads of state. "It would rank with any classical theatrical production that is to be released with a teaser trailer. The video does full justice to the Trump-Modi partnership built on trust, respect, recognition," Chityala said.

Also read: Chance of 'mini trade deal' between India, US before Nov 3 election: Top US diplomat

A prominent Trump supporter, Al Mason, who conceptualised the video, said if Trump gets another four years at the White House it will massively boost the India-US partnership. Mason is co-chair of the Trump Victory Indian American Finance Committee. The "4 More Years" video has been viewed more than 3,00,000 times on Twitter alone. It has been viewed several hundred-thousand times more on Facebook, Instagram and WhatsApp.

Indian-American Danny Gaikwad described the video's popularity as "hitting a home run in the Indian Diaspora." With an aggressive China knocking on India's doorstep, it is more than ever we need a very strong friend in the White House, like the president who will stand unequivocally for Modi and for India, said Dr Raj Bhayani.