A fact sheet at the end of the first US-India Strategic and Commercial Dialogue noted that Indo-US bilateral trade has grown from $19 bn in 2000 to over $100 bn in 2014. 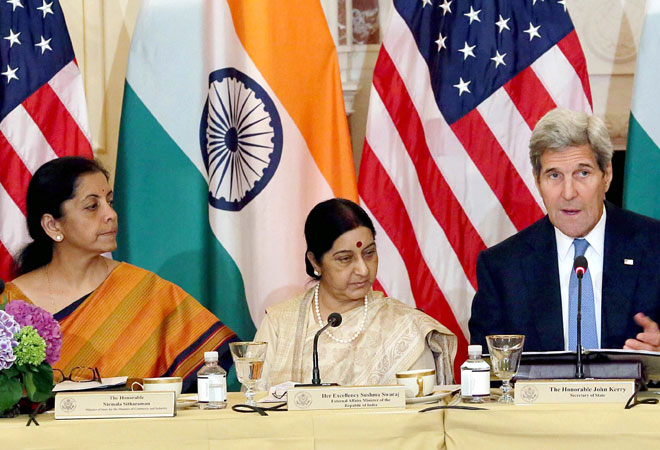 As India and the US work to increase their bilateral trade five fold to $500 million, they have launched a joint work stream on the 'ease of doing business' while continuing discussions on a bilateral investment treaty (BIT).

The launch of the work stream was announced on the conclusion of the first US-India Strategic and Commercial Dialogue here on Tuesday.

External Affairs Minister Sushma Swaraj and Minister of State for Commerce and Industry Nirmala Sitharaman co-chaired the dialogue with their US counterparts Secretary of State John Kerry and Commerce Secretary Penny Pritzker.

The two sides have also agreed to support the efforts of the Harvard Business School and the Indian Institute of Management, Ahmedabad to develop a cluster map. This tool will help Indian companies integrate into global supply chains, strengthen India's economy and better enable American companies to identify markets for their products and services in India.

Launch of a private sector-led Innovation Forum was also announced. It will serve as an additional avenue through which the two governments seek private sector feedback and input for bilateral discussions.

A fact sheet issued at the end of the dialogue noted that India-US bilateral trade has grown from $19 billion in 2000 to over $100 billion in 2014.

On Bilateral Investment Treaty, the fact sheet said that India and US plan to continue discussions to assess the prospects for a high standard BIT that would deepen the bilateral economic relationship and support economic growth and job creation in both countries.

The US Commerce Department's SelectUSA initiative and the Silicon Valley chapter of The Indus Entrepreneurs (TiE) have signed a memorandum of intent to work together to provide Indian entrepreneurs the data and assistance they need to facilitate their expansion into the United States.

SelectUSA will lead the first-ever "India Road Show" to New Delhi, Mumbai, Chennai, and Kolkata on October 13-16 in order to offer US state, local, and regional economic development organizations the opportunity to directly market their locations to potential investors throughout the country.

The US has invited India to participate in the Commerce Department's ACE (Americas Competitiveness Exchange for Innovation and Entrepreneurship) programme.

At the first meeting of the US-India Information and Communication Technology Working Group, the US put forth a draft work plan to facilitate collaboration and development in support of Prime Minister Narendra Modi's "Digital India" initiative.

US Deputy Commerce Secretary will lead a Trade Mission to further smart cities development in India and introduce US technologies and solutions to boost the energy efficiency of India's infrastructure.

The Trade Mission will include visits to New Delhi, Mumbai, and Chennai, and is scheduled to take place on Feb 8-12, 2016.

US has also invited India to participate in the next round of the Global City Teams Challenge (GCTC) organized by the US National Institute of Standards and Technology (NIST).

Participants in the Challenge will work together with other international counterparts in developing a smart city framework, standards and technology road maps for interoperability.

This programme would initiate a regionally-owned planning process in India, designed to build capacity, guide economic prosperity and resilience related to smart city and other projects.

It would provide a coordinating mechanism for individuals, organizations, clusters, local governments, and private industry.

The US Trade and Development Agency (USTDA) has also invited a delegation of Andhra Pradesh and central government officials to the US for a Smart Solutions for Smart Cities Reverse Trade Mission later this year.