Govt nod to 'Housing for All' scheme, interest relief for poor

The Union Cabinet accepted the recommendations of an Inter-Ministerial Committee to increase interest subvention to 6.50 per cent on housing loans to beneficiaries belonging to economic weaker section (EWS). 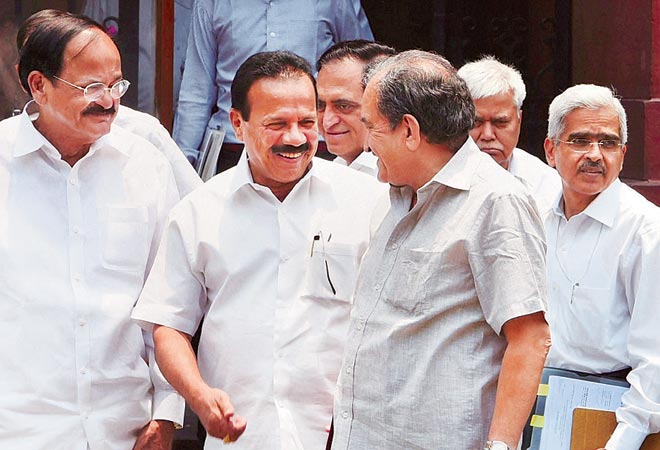 Government on Wednesday gave its approval for the launch of the 'Housing for All by 2022' scheme paving the way for affordable homes to the urban poor and slum dwellers at low interest rates.

The Union Cabinet chaired by Prime Minister Narendra Modi accepted the recommendations of an Inter-Ministerial Committee to increase interest subvention to 6.50 per cent on housing loans to beneficiaries belonging to economic weaker section (EWS) including slum-dwellers and low income groups (LIGs).

The Cabinet's decision will benefit the urban poor by an amount of nearly Rs 2.30 lakh each and as a result the monthly EMI will come down by nearly Rs 2,852 per month.

NDA's flagship scheme will be formally launched on June 25 when the government will bring out guidelines for its implementation.

According to a senior Housing and Urban Poverty Department Alleviation official, at present, with the interest rate of 10.50 per cent, current EMI on admissible loan component of Rs 6 lakh, over 15-year loan duration works out to be Rs 6,632 per month.

With Cabinet deciding on credit-linked subsidy to 6.50 per cent, EMI comes down to Rs 4,050 per month, benefiting the urban poor by Rs 2,582 per month, he said.

On the whole, central assistance in the range of Rs 1 lakh to Rs 2.30 lakh per beneficiary would be provided under different components of the National Urban Housing Mission in urban areas to build 2 crore new houses to meet the housing shortage, over the next 7 years.

As per the earlier approval of the Union Cabinet, there are four components to the National Urban Housing Mission.

Under the redevelopment plan of slums with the participation of private developers using land as a resource component, a central grant of Rs 1 lakh on an average per beneficiary would be provided. States/Union Territories are at liberty to use this grant for any slum redevelopment schemes to be taken up to make such projects viable, if required.

In the second category, affordable housing through credit- linked subsidy scheme, an interest subsidy of 6.50 per cent on each housing loan to EWS and LIG beneficiaries would be provided by the central government.

Under third component of affordable housing in partnership with private and public sectors, central assistance of Rs 1.50 lakh to each beneficiary would be provided to promote housing stock for urban poor with the involvement of private and public sectors, provided 35 per cent of dwelling units of the projects proposed are earmarked for EWS category.

For the fourth category of subsidy for individual beneficiary-led construction or enhancement of houses, a central assistance of Rs 1.50 lakh would be provided to each eligible urban poor beneficiary to enable him build his own house or undertake improvements to existing houses.

The housing stock demand may further increase further to the demand assessment to be made by the states and UTs based on online registration through integration of Adhaar Number of Jan Dhan Yojana accounts.

Mother Dairy comes out strongly in defence of its products