High-profile cases have included Adidas clashing with Skechers USA and Nike taking on Puma; the current ruling could erode the value of the Adidas brand, currently worth $14.3 billion 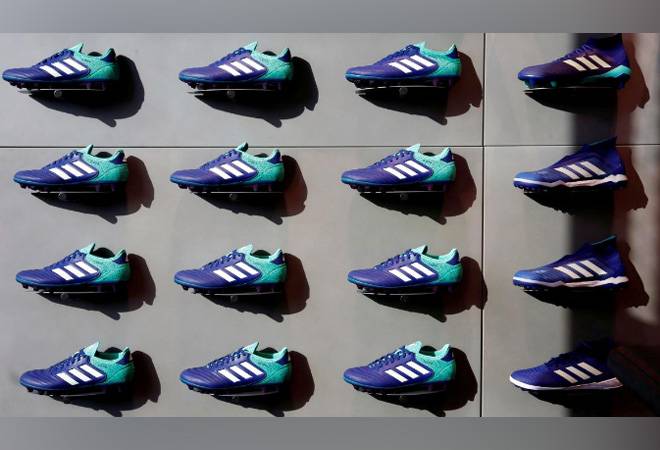 Adidas has failed in an attempt to broaden trademark protection for its three-stripe symbol in the European Union as rivals seek to muscle into the market for striped shoes and clothing. Adidas had tried to establish a wider trademark for "three parallel equidistant stripes of equal width applied to the product in whichever direction".

The German sporting goods company has trademark protection for its slanted three-stripe logo. "The verdict does not affect our ability to use and protect the three stripes," a spokeswoman said. The sporting goods industry has seen a rise in trademark and patent disputes as the biggest players try to differentiate their products and justify premium pricing.

High-profile cases have included Adidas clashing with Skechers USA and Nike taking on Puma. Wednesday's ruling could erode the value of the Adidas brand, currently worth $14.3 billion, according to David Haigh, chief executive of consultancy Brand Finance. "The name is more important but the recognisable three stripes are also a major contributor to recognition," he said. Adidas shares were down 1.8% at 1210 GMT.

The General Court of the European Union said it had upheld a 2016 decision of the European Intellectual Property Office (EUIPO) to annul a previous acceptance of the trademark, which Adidas registered in 2014 for clothing, footwear and headgear. That trademark was challenged by Belgium's Shoe Branding Europe after a decade-long dispute with Adidas. The same EU court had rendered Shoe Branding's own two-stripe trademark invalid last year, saying the stripes were too similar to those of Adidas.

Shoe Branding bought Patrick, which was founded in 1892 and says it is the oldest sports brand in Europe, in 2008. Patrick features two stripes on its shoes and clothing, although they slope in the opposite direction to those on Adidas shoes.

Adidas needed to show that three parallel stripes, regardless of direction on the product, had acquired a "distinctive character" throughout the EU based on its use so that consumers inherently knew a product was from Adidas and could distinguish it from products of another company. The court said the mark was not a pattern but an "ordinary figurative mark" and it was not relevant to take into account specific uses involving colors.

Adidas, which can still appeal to the European Court of Justice, said in a statement the ruling did not impact other protected uses of the trademark in Europe. "Whilst we are disappointed with the decision, we are further evaluating it and are welcoming the useful guidance that the court will give us for protecting our 3-stripe mark applied to our products in whichever direction in the future," it said.

The court said Adidas had provided evidence related to the mark's use in five EU countries, but not throughout the bloc. Geert Glas, an intellectual property lawyer at Allen & Overy in Brussels, said the decision seemed to be more based on procedure and that Adidas should be able to produce evidence showing that the three stripes had distinctiveness in Europe.

"It's a setback for Adidas, but it shouldn't be the end of their three stripes trademark," Glas said. In other cases involving the big sporting goods players, Nike last year filed a lawsuit accusing German rival Puma of using patented athletic shoe technology without authorisation. And a U.S. appeals court said Adidas can protect its Stan Smith tennis shoe against an alleged Skechers knockoff, but that Skechers could sell another mimicking Adidas' three-stripes. In 2017 a U.S. judge rejected Adidas' effort to block Skechers from selling athletic sneakers that it said copied its "Springblade" concept.