G20 Summit: The Modi-Trump meet assumes significance in the wake of a recent tariff war between the US and India; a day before the meeting, Trump had called for withdrawal of high import duties imposed by India recently 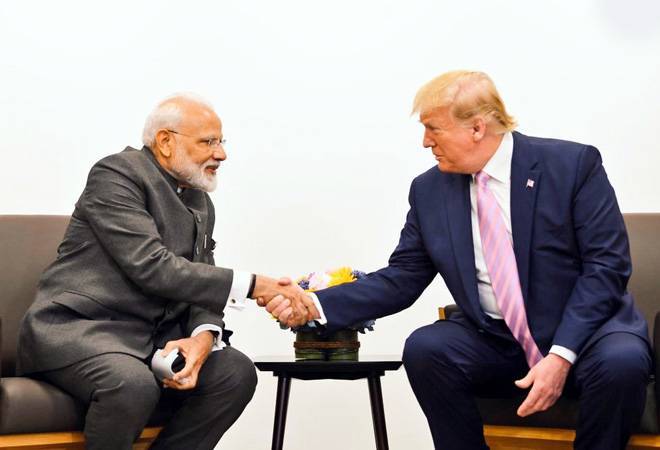 G20 Summit: In his first meeting after re-election, Prime Minister Narendra Modi met US President Donald Trump at the sidelines of G20 Summit in Japan's city of Osaka on Friday. Both the leaders discussed various bilateral and global issues on the sidelines of the G20 Summit, tweeted PMO India. PM Modi thanked Trump for congratulating him immediately after his election victory in May, and said during their bilateral meeting at the G20 Summit, he and Trump would discuss issues related to Iran, 5G rollout, and bilateral and defence relations between India and the United States.

Congratulating Prime Minister Modi for his landslide victory in the election again, Trump said: "You (PM Modi) deserve it (victory in 2019 Lok Sabha elections). You've done a great job in pulling together. I remember when you first took over, there were many factions and they were fighting with each other and now they get along. It's a fantastic tribute to you and your abilities." On India-US relations, Trump said both the countries had never been closer. "We have become great friends and our countries have never been closer. I can say that with surety. We'll work together in many ways including military, we'll be discussing trade today," said the US President.

On the issue of sanctions against Iran, Trump said: "The message is the same as last 3 days. We have a lot of time, no rush. They can take their time. There is absolutely no time pressure. I think in the end hopefully it's going to work out. If it works out, great, if it doesn't, you'll be hearing about it."

The two leaders met shortly after the Japan-America-India trilateral meeting. Foreign Secretary Vijay Gokhale said Modi, Trump and Japanese Prime Minister Shinzo Abe, during their trilateral meeting, discussed how they could bring stability in the region. "On Iran, the primary focus was on how we ensure stability there, as instability affects us in many ways, not just in a matter of energy needs, but also in terms of our large diaspora in Gulf, 8 million Indians in the Gulf," he said.

The Modi-Trump meet assumes significance in the wake of a recent tariff war between the US and India. Before his arrival in Japan on Thursday, Trump had said the recent tariff hike by India was "unacceptable". "I look forward to speaking with Prime Minister (Narendra) Modi about the fact that India, for years having put very high Tariffs against the United States, just recently increased the Tariffs even further. This is unacceptable and the Tariffs must be withdrawn!" he tweeted. He was referring to a recent tariff hike by India on 28 items exported by the US. The duty was hiked after the US withdrawal of preferential trade access for Indian products.

Trump's tweet came a day after his Secretary of State Mike Pompeo met PM Modi and Foreign Minister S Jaishankar during his visit to India. During their meeting, Pompeo and Jaishankar also discussed the trade frictions between India and the United States at length. Both foreign ministers tried to present the perspective of their leaders on matters of trade in the interaction.

Trump has also criticised India's high import tariff on the iconic Harley-Davidson motorcycles as "unacceptable" though acknowledging that his "good friend" Prime Minister Modi has reduced it from 100 per cent to 50 per cent. Last February, India slashed the customs duty on imported motorcycles like Harley-Davidson to 50 per cent after Trump called it "unfair" and threatened to increase the tariff on import of Indian bikes to the US.

Nirav Modi remanded to custody in UK prison until July 25