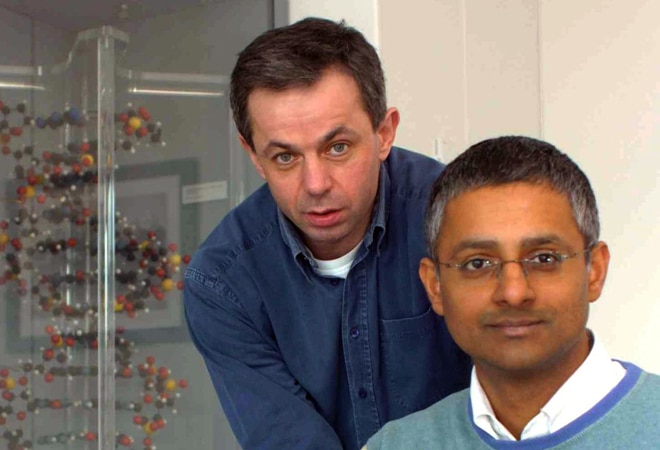 Cambridge University chemists Shankar Balasubramanian and David Klenerman were on Tuesday declared the winners of the 2020 Millennium Technology Prize, a prestigious global science and technology prize awarded for their development of revolutionary sequencing techniques which means DNA can now be read in super-fast times.

The prize, awarded by Technology Academy Finland (TAF) at two-year intervals since 2004 - when Sir Tim Berners-Lee was honoured for his discovery of the World Wide Web - to highlight the extensive impact of science and innovation on the wellbeing of society, is worth Euro 1 million.

Sir Balasubramanian, an India-born British professor of medicinal chemistry, and Sir Klenerman, a British biophysical chemist, co-invented the Solexa-Illumina Next Generation DNA Sequencing (NGS), technology enabling fast, accurate, low-cost and large-scale genome sequencing - the process of determining the complete DNA sequence of an organism''s make-up, which is proving crucial in humanity's fight against the COVID-19 pandemic.

The duo went on to co-found the company Solexa to make the technology more broadly available to the world.

"This is the first time we've received an international prize that recognises our contribution to developing the technology - but it's not just for us, it''s for the whole team that played a key role in the development of the technology and for all those that have inspired us on our journey," the winning scientists said in a joint statement.

President of the Republic of Finland Sauli Niinisto, who is the Patron of the prize, presented the award to the scientists in a virtual ceremony on Tuesday.

The announcement of the 2020 award was delayed due to the COVID-19 pandemic.

Meanwhile, the technology is being used to track and explore the novel coronavirus viral mutations, which is a growing global concern. "The future potential of NGS is enormous and the exploitation of the technology is still in its infancy," said Paivi Torma, Academy Professor and Chair of the Millennium Technology Prize Committee.

"The technology will be a crucial element in promoting sustainable development through personalisation of medicine, understanding and fighting killer diseases, and hence improving the quality of life. Professor Balasubramanian and Professor Klenerman are worthy winners of the prize," said Prof. Torma.

The 2020 prize marks the first time that the honour has been awarded to more than one recipient for the same innovation, celebrating the significance of collaboration.

Professor Marja Makarow, Chair of Technology Academy Finland said: "Collaboration is an essential part of ensuring positive change for the future. Next Generation Sequencing is the perfect example of what can be achieved through teamwork and individuals from different scientific backgrounds coming together to solve a problem."

"The technology pioneered by Professor Balasubramanian and Professor Klenerman has also played a key role in helping discover the coronavirus''s sequence, which in turn enabled the creation of the vaccines - itself a triumph for cross-border collaboration - and helped identify new variants of COVID-19," Makarow said.

The winning work has helped the creation of multiple vaccines, now being administered worldwide, and is critical to the creation of new vaccines against new dangerous viral strains. The results will also be used to prevent future pandemics.

However, the International Selection Committee - the body of experts that evaluates all nominations for the prize - pointed out that it had made its decision in February 2020, before the global spread of the COVID-19 pandemic.

The technology is also allowing scientists and researchers to identify the underlying factors in individuals that contribute to their immune response to COVID-19.

This information is essential to unravelling the reason behind why some people respond much worse to the virus than others. The results of these studies will be invaluable for understanding how to minimise the chances of people developing exaggerated inflammatory responses, which is now understood as being responsible for some of the symptoms of COVID-19.

The winning NGS technology has had, and continues to have, a huge transformative impact in the fields of genomics, medicine and biology. One measure of the scale of change is that it has allowed a million-fold improvement in speed and cost, when compared to the first sequencing of the human genome.

The prize committee points to how in 2000, sequencing of one human genome took over 10 years and cost more than a billion dollars.

Today, the human genome can be sequenced in one day at a cost of USD 1,000 and more than a million human genomes are sequenced at scale each year, thanks to the technology co-invented by Professors Balasubramanian and Klenerman. This means the world can understand diseases much better and much more quickly.

The NGS method's ability to sequence billions of fragments in a parallel fashion makes the technique fast, accurate and very cost-efficient. The invention of NGS has been described as a revolutionary and novel approach to the understanding of the genetic code in all living organisms.

In the field of cancer, NGS is becoming the standard analytical method for defining personalised therapeutic treatment. In addition to medical applications, NGS has also had a major impact on all of biology as it allows the clear identification of thousands of organisms in almost any kind of sample.

The NGS method involves fragmenting sample DNA into many small pieces that are immobilised on the surface of a chip and locally amplified.

Each fragment is then decoded on the chip, base-by-base, using fluorescently coloured nucleotides added by an enzyme. By detecting the colour-coded nucleotides incorporated at each position on the chip with a fluorescence detector - and repeating this cycle hundreds of times - it is possible to determine the DNA sequence of each fragment.

The collected data is then analysed using sophisticated computer software to assemble the full DNA sequence from the sequence of all these fragments.

Over 3,200 rockets from Gaza wreak havoc on Israeli cities in latest war