By the time the passenger, Mahesh A. Patil, saw the worm, he had already eaten half of it along with the garlic sauted spinach and peas served with spring omelette.

In a glaring instance of Air India 's (AI) shoddy service, a chief engineer in the Merchant Navy had to go through the shocking experience of eating a good half of a worm that got mixed in the breakfast served on Pune-Delhi flight No. AI852 on September 11. 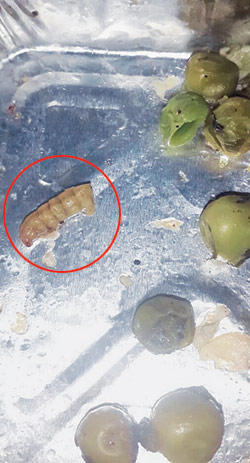 The half-eaten worm found in the breakfast served to a Merchant Navy chief engineer Pune-Delhi flight No. AI852 on September 11.
By the time the passenger, Mahesh A. Patil, saw the worm, he had already eaten half of it along with the garlic sauteed spinach and peas served with spring omelette. An aghast Patil cried in horror when he saw the worm, which lay exposed on his tray after he had eaten most of the meal.

Subsequently, he lodged a formal complaint with the crew and also reported the matter to flight commander Captain Deepak Mendiratta. Patil was seated in the upper economy J class. Patil's complaint states, "Found half-cut worm in green peas breakfast menu." He was offered another breakfast but curtly refused.

Some other passengers gave up their breakfast in disgust, a passenger who was also on board told MAIL TODAY. The food was supplied by Chefair, one of Air India's regular caterers. 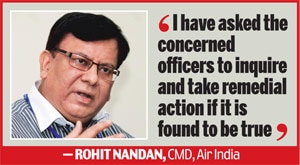 AI chairman and managing director Rohit Nandan said that no such complaint has reached his office. "I have asked the concerned officers to inquire and take remedial action if it is found to be true," Nandan told MAIL TODAY. AI crew members have also been complaining about stale food being served by the airline's caterers. "We don't eat the food supplied by Air India caterers for breakfast, lunch or dinner on board. We only have coffee, tea or biscuits," said a cabin crew member. Another cabin crew member said, "The senior management of our airline do not get to know of such complaints lodged by passengers. At times, we face the brunt of passengers. The most we can do is to complain about such cases concerning unhygienic food to our immediate seniors."

A crew member said, "For example, we have 43 flights in the morning from Delhi itself. Obviously, caterers will not serve breakfast prepared in the morning; it is just not possible. What passengers will get is stale food." Recently, a couple on board a Hyderabad-Delhi flight complained of fungus in bread served to them. In October 2013, an AI passenger found worms in a sandwich served to him on a New York-Delhi flight.