As the situation keeps evolving, airlines are changing their plans almost on a weekly basis; many airlines have shifted their flight resumption schedules from May to July-September

As the countries across the world have gone into lockdowns, the aviation sector has suffered a lot. In a webinar, SITA CEO Barbara Dalibard said that the COVID-19 has had a dramatic impact on the air transport industry. She said that the global flight activity has come down 80 per cent year-on-year at the end of April. In contrast, the global flight activities were up 9.8 per cent in April 2019. SITA is one of the leading companies in the global aviation sector, catering to over than 1,000 airports and over 400 airlines with its IT and telecom services. 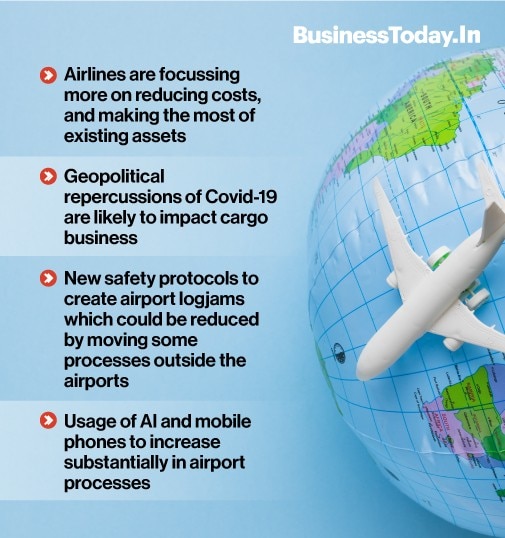 In her presentation titled 'The New Normal: The Changing Face Of Aviation Post COVID-19', Dalibard said that there are four key areas for airports and airlines globally: economic pressures, safety and security, sustainability, and geopolitical repercussions.

On the economic front, there's an increased focus to bring down costs, and make the most of the existing assets. Geopolitical impact of the outbreak would include countries closing down their boundaries, and there will be re-localisation of industries which could potentially affect cargo business.

After the halting of international travel, global aviation industry went into a tailspin. While the Indian government has been sitting on the relief proposals submitted by the domestic players, the US government had announced $25 billion bailout package for its crippled aviation sector (in mid-April) with a plenty of riders.

As the situation keeps evolving, airlines are changing their plans almost on a weekly basis. For instance, many airlines have shifted their flight resumption schedules from May to July-September.

Among the big trends that are going to emerge in the post-COVID world, Dalibard said that higher usage of mobiles, artificial intelligence (AI) and personal data protection are going to be the most crucial. How? From the time everything was people-driven, airports today have a fair amount of automated systems. That's because of the push from the passengers' side who feel more comfortable in an automated environment. Going forward, a lot airport processes - check-ins, boarding, etc - would be bypassed through handheld devices (particularly mobiles). "Airports of the future will have lesser kiosks, and higher mobile low-touch experiences," she said.

Then, AI can help in optimising processes and getting information quickly. For instance, AI can predict disruptions at the airports, and aid in managing crowds. But there's a caveat too. Airports cannot completely rely on AI to make choices, and the technology should be used statistically. While using AI, the airports also need to preserve individual rights. Ethics need to be followed around taking data from passengers, and sharing with authorities should be done on a need-to-know basis.

As the new safety and security protocols are being developed by different countries, there's a likelihood of airports getting more congested. For instance, Emirates has initiated a new programme requiring international passengers to take a rapid COVID-19 blood test which takes about 10 minutes per passenger. While the programme is aimed at bringing the confidence of travellers back, it would lead to logjams at the airports. "In order to reduce congestion, there's a need to take some of the processes (check-in, baggage) outside the airports," said Dalibard.

In addition, better coordination between airports and airlines is crucial to implement new measures. While there's a definite move towards protectionism across the world (due to economic tensions), collaboration is important to simplify the processes at the airports.