What is CRR, SLR, Repo Rate & Reverse Repo Rate and their linkage with Home Loan Rate?

The article is authored by Square Capital research team. Square Capital is India's first unbiased loan advisor for best deals on all types of loans and is known for its unmatched advisory services.

The article is authored by Square Capital research team. Square Capital  is India's first unbiased loan advisor for best deals on all types of loans and is known for its unmatched advisory services. It is the mortgage arm of Square Capital - India's largest real estate transactions company.

Across the globe it is the government in-power which issues the currency notes and that currency is known as the "Legal Tender" i.e. accepted by all in that country. In India it is the role of the Central bank of the country i.e Reserve Bank of India that prints currency notes and it bears the Governor's signature on it.

The primary functions of RBI is:

1.To control the supply of money in the economy i.e how much money is available for the industry or the economy  and
2. The cost of credit.' meaning, and what is the price that the economy has to pay to borrow that money.

These two things (Supply of money and cost of credit) are closely monitored and controlled by RBI. The inflation and growth in the economy are primarily impacted by these two factors.

The various methods employed by the RBI to control credit creation power of the commercial banks can be classified into two groups, viz., quantitative controls and qualitative controls.

The current CRR is 4%. If RBI cuts CRR in its next monetary policy review then it will mean banks will be left with more money to lend or to invest. So, more money can be released into the economy which may spur economic growth.

What is Statutory Liquidity Ratio (SLR)?

Besides CRR, Banks have to invest certain percentage of their deposits in specified financial securities like Central Government or State Government securities. This percentage is known as SLR.

This money is predominantly invested in government approved securities (bonds), Gold, which mean the banks can earn some amount as 'interest' on these investments as against CRR where they do not earn anything.

Example - An Individual deposits say Rs 1000 in bank. Then Bank receives Rs 1000 and has to keep some percentage of it with RBI as SLR. If the prevailing SLR is 20% then they will have to invest Rs 200 in Government Securities 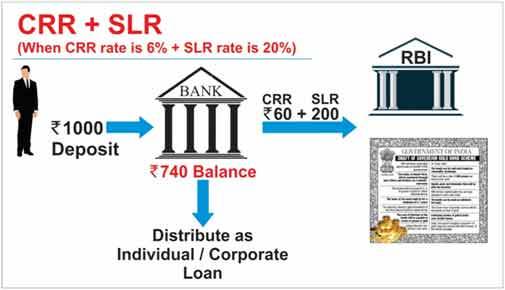 Higher reserve requirements such as SLR make banks relatively safe (as a certain portion of their deposits are always redeemable) but at the same time restrict their capacity to lend. To that extent, lowering of reserve requirement increases the resources available with a bank to lend and helps control inflation and propels growth.

What is Repo Rate?

When we need money, we take loans from banks. And banks charge certain interest rate on these loans. This is called as cost of credit (the rate at which we borrow the money).

Similarly, when banks need money they approach RBI. The rate at which banks borrow money from the RBI by selling their surplus government securities to RBI is known as "Repo Rate." Repo rate is short form of Repurchase Rate. Generally, these loans are for short durations up to 2 weeks.

It simply means Repo Rate is the rate at which RBI lends money to commercial banks against the pledge of government securities whenever the banks are in need of funds to meet their day-to-day obligations.

Banks enter into an agreement with the RBI to repurchase the same pledged government securities at a future date at a pre-determined price. RBI manages this repo rate which is the cost of credit for the bank.

So, higher the repo rate higher the cost of short-term money and vice versa.

Higher repo rate may slowdown the growth of the economy.

If the repo rate is low then banks can charge lower interest rates on the loans taken by us.

So whenever the repo rate is cut, can we expect both the deposit rates and lending rates of banks to come down to some extent?

This may or may not happen every time. The lending rate of banks goes down to the existing bank borrowers only when the banks reduce their base rates  (Base Rate is the minimum rate below which Banks are not permitted to lend) as all lending rates of banks are linked to the base rate of every bank. In the absence of a cut in the base rate, the repo rate cut does not get automatically transmitted to the individual bank customers. This is the reason why you might have observed that your loan EMIsremain same even after RBI lowers the repo rates.

Banks check various other factors (like credit to deposit ratios etc.,) before reducing the Base rates.

What is Reverse Repo Rate?

RBI website has repository of all CRR, SLR & Base Rates