As per CMIE data, an estimated 40.49 crore persons were employed in India during May-August 2019

As per CMIE data, an estimated 40.49 crore persons were employed in India during May-August 2019, compared to 40.24 crore people employed during these months a year-ago. This translates to 25 lakh additional jobs, indicating a healthy sign because during the same period in last two years when employment had fallen. 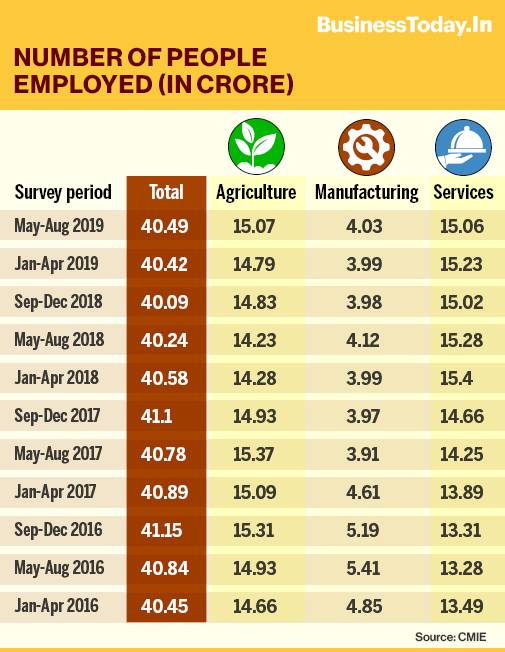 For May-August 2019, the consumer pyramids household survey also reported a sequential growth in employment, the report said. The May-August 2019 survey recorded an estimated increase of 6 lakh jobs over the January-April 2019 survey.  "This is noteworthy because jobs had declined sequentially in all the preceding three surveys, i.e. in all the three surveys of 2018," the report said.

On the sectoral front, agriculture witnessed an increase of 84 lakh jobs, led by crop cultivation. The estimated employment in agri sector rose to 13.9 crore from 13.3 crore, while poultry farming and animal husbandry reported a growth in estimated employment from 18 lakh to 43 lakh. "This is surprising because monsoon rains were running behind schedule and by the end of August 2019, kharif sowing was 1.7 per cent lower than it was by the end of August 2018," as per the report.

Construction, which is known to be the first place for unskilled and surplus workers from the farmlands to be employed, remained under stress as it shed 24 lakh jobs. The estimated employment in construction sector declined to 6 crore in May-August 2019, from 6.2 crore during the same period last year.

Meanwhile, travel and tourism were among top laggards as it shed 22 lakh jobs. Several other services sectors, include IT and financial services, shed 6 lakh and 5 lakh jobs, respectively, in May-August 2019 compared the year-ago period.

"The share of easily identifiable low-skill jobs is quite high. While all sectors have low-skill jobs, the sectors that have largely low-skill jobs are agriculture, construction, retail trade and personal non-professional services. The share of these jobs in total jobs is over 70 per cent. The share of these jobs in the total employment has also been creeping up. It was about 68.7 per cent in 2016. Then it rose to 72.1 in 2017 and 72.2 in 2018. In the first eight months of 2019, it was higher at 73 per cent," the report noted.

Employment in the manufacturing sector fell by 9 lakh between May-August 2018 and May-August 2019. The textiles industry is estimated to have shed 22 lakh jobs and non-metallic mineral products shed another 4 lakh, as per the report.

The report noted that decline in manufacturing, IT and financial sector jobs is worrying, while an increase in farmhands is not a solution to the jobs challenge.