The unemployment rate in 11 states pipped the pan-Indian average of 6.1 per cent in 2017-18 as compared to nine states with a higher joblessness rate than the national average of 2.2 per cent in 2011-12, the Business Standard reported citing annual periodic labour force survey undertaken by National Sample Survey Office (NSSO).

While, states like Haryana, Kerala, Uttarakhand, Bihar, Assam, Jharkhand and Odisha continued to clock high unemployment numbers as compared to national figures in the year 2011-12, Punjab, Tamil Nadu, Odisha, Uttarakhand, and Bihar joined the list in 2017-18, according to the survey. The news daily claims to have reviewed the survey which has not yet been released by the Central Government.

The NSSO is a government body which conducts large scale sample surveys in diverse fields on an all-India basis. 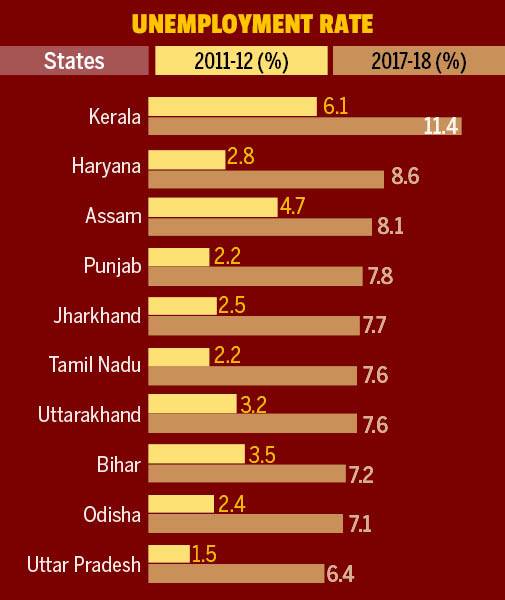 Meanwhile, Chhattisgarh logged the lowest unemployment rate at 3.3 per cent in 2017-18, followed by Madhya Pradesh at 4.5 per cent and West Bengal at 4.6 per cent as the joblessness rate jumped in all major states, the survey said.

Gujarat however, had the lowest unemployment rate in India in 2011-12, but the numbers leapt in 2017-18, reaching the same level as Karnataka trumping Madhya Pradesh, Maharashtra and West Bengal among others.

Touching upon the youth indices, the NSSO survey articulated that amongst the youth population between the age group of 15 and 29 years, Kerala manifested the female unemployment rate at alarming levels. Almost three-fourths of the female youth (61.7 per cent in rural and 65.2 per cent in urban areas) in the state, willing and able to find employment, did not get a job in 2017-18.

Also Read: Data Fudging: No data on unemployment means no attention, no remedy