Adani group terms reports "blatantly erroneous" and that it is "done to deliberately mislead the investing community". It said this is causing irreparable loss of economic value to investors at large and reputation of the group

"We regret to mention that these reports are blatantly erroneous and is done to deliberately mislead the investing community. This is causing irreparable loss of economic value to the investors at large and reputation of the group," the Adani group told the stock exchanges today. 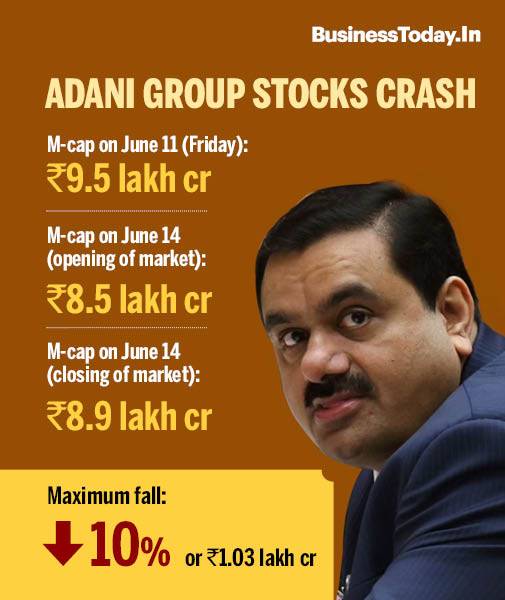 These three funds collectively owned about 2.1 per cent to 8.91 per cent stake in five Adani group companies as of March 31, 2021. The value of their stakes in these companies -- Adani Power, Adani Enterprises, Adani Green, Adani Transmission and Adani Total Gas Ltd -- had surged 10 times since March 2020 to $7.78 billion today, reported Reuters.

The share has zoomed 830 per cent in one year and risen 196 per cent since the beginning of this year. In a month, the stock has gained 16.22 per cent. The market cap of the firm fell to Rs 1.56 lakh crore on BSE. Other Adani Group stocks such as Adani Ports and Special Economic Zone plummeted 18.75 per cent to Rs 681.50 on the BSE today.