Zee Entertainment-Invesco Oppenheimer deal: The stake sale has come through at a premium of 10 per cent, which is 15-20 per cent lower than what the market had speculated.

Zee Entertainment has finally announced its much-awaited stake sale. The entertainment company has sold its 11 per cent stake to Invesco Oppenheimer Developing Markets Fund, for Rs 4,224 crore. The fund already has an 8 per cent stake in Zee that takes its total holding up to 19 per cent. The stake sale has come through at a premium of 10 per cent, which is 15-20 per cent lower than what the market had speculated.

In fact, speculations were rife that Zee was on the verge of signing on the dotted lines with a consortium led by American cable major, Comcast, Blackstone and James Murdoch's Luca Systems. The Comcast-led consortium, which reportedly offered to buy a 26 per cent stake in the company, wanted the promoters to exit. 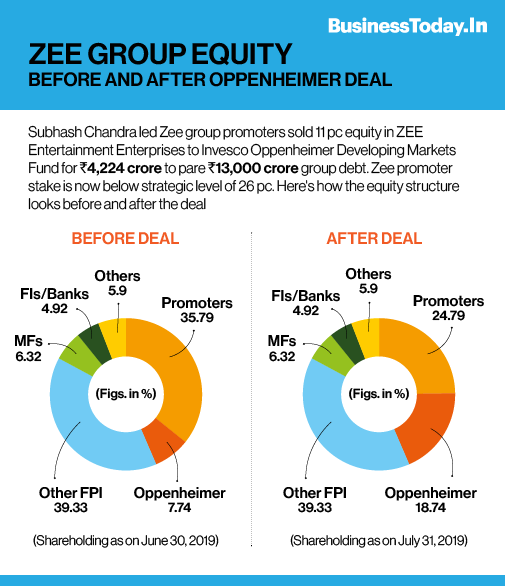 The deal with Invesco is surely a sweet deal for the promoters Subhash Chandra and Punit Goenka as it has allowed them to stay on and run the business. Although the industry expected a dilution of 26 per cent stakes, a Zee insider in an earlier interview with Business Today said that the promoters had been wondering whether they actually needed to dilute a large percentage of their stake, as sister concern, Essel Infrastructure (which has debt to the tune of Rs 11,400 crore) had sold three of its road projects in MP, Karnataka and Telangana for around Rs 3,500 crore. It is also known to have sold its power assets to Edelweiss for Rs 2,500 crore. The company's negotiation power has improved with these sale announcements, the insider had said.

The company has issued a press release, wherein it has said that it is well within its commitment of repaying its debt obligations by September this year.