The advertisement was published in the name of Landomus Realty Ventures Inc, USA, but the company is also registered with Registrar of Companies, Bangalore.

The advertisementsaid the company would like to invest $500 billion in equity in various infra projects.
BusinessToday.In

An advertisement, purportedly by a US-based company Landomus Realty Ventures Inc, published in several editions of a national newspaper, created a buzz on social media on Monday morning.

The advertisement, addressed to Prime Minister Narendra Modi, said the company would like to invest $500 billion in equity in various infra projects under the National Infrastructure Pipeline (NIP) and non-NIP projects. It also said the company has a concrete plan to make India "pandemic free". However, digital footprints of firm's past records cast a doubt on its track record and business promises.

The advertisement was published in the name of Landomus Realty Ventures Inc, USA, but the company is also registered with Registrar of Companies, Bangalore. India Today TV visited the registered address of the firm in Bengaluru, but did not find its offices at the location. People from nearby offices also failed to identify the company.

As per the corporate papers, the company was registered in US on February 2, 2017. However, it was registered in India in July 2015. The Indian firm has not filed its annual returns. While its current website doesn't provide much information about its business activities, an archived version of its website shows that the company was involved in the business of land banking.

"Land Banking is the practice of aggregating land parcels at strategic locations for future sale or development and there by realizing high appreciation of investment," an archived page of Landomus Realty website from year 2018, which has since been deleted, read. Another archived page of the website which has also been removed now claimed that Landomus Realty offered a target compound annual growth rate of 34.93 per cent to its investors in their plans to raise $25,000,000. 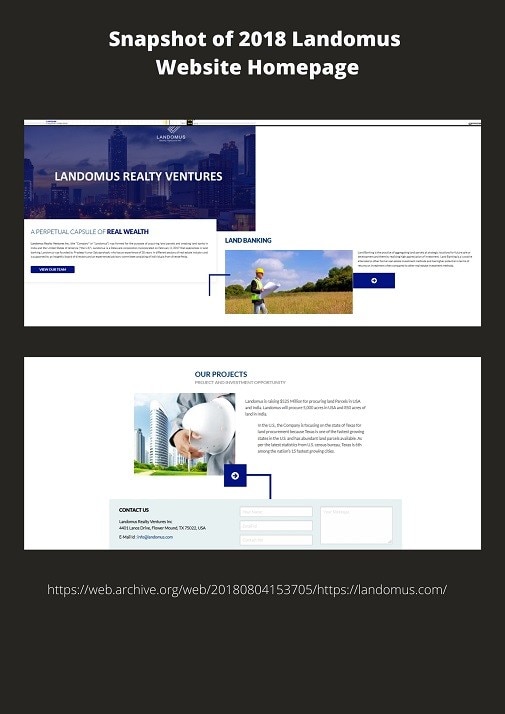 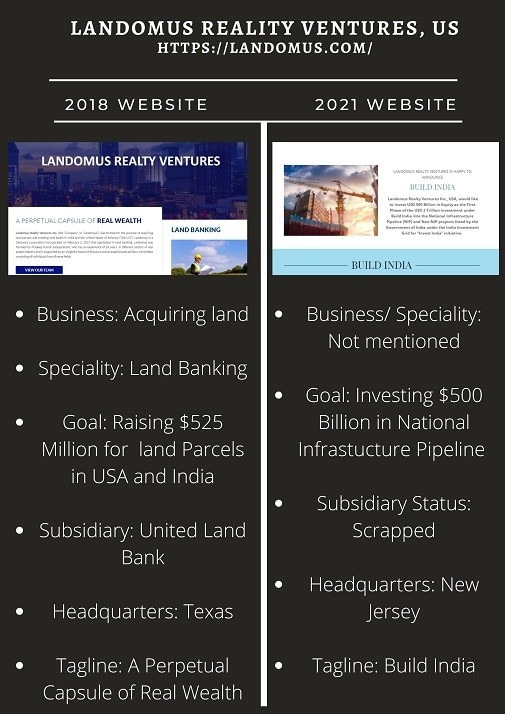 According to domain registration data, the current website of Landomus USA has been registered by Karnataka-based United Land Bank (ULB). Archived digital records suggest that ULB was founded by S Pradeep Kumar, the chairman of Landomus Group and the man behind the newspaper advertisement. ULB acted as a consultant and facilitator to procure land and properties in Bengaluru and Mysore.

"ULB's founders are now taking the firm global offering to serve as a facilitator for NRIs (non-resident Indians) and foreign nationals of Indian origin looking to investment in Bangalore's lucrative real estate market," an archived page from its website from 2017 said. The website is defunct now. The company also does not have any physical presence at its Bengaluru address. There is evidence to show that the website of UBL was live between years 2010 to 2018. Back then, Kumar called himself a property market expert who had "played a crucial role in the success of many a number of giant real estate projects in the city of Bangalore". However, its project page did not identify any known projects.