At least 23,000 dollar-millionaires have left India since 2014: Report

Prime Minister Narendra Modi stormed to power in 2014 promising to bring back illegal wealth stashed abroad. While he has not had much success in that direction, his government's crackdown on black money has reportedly seen nearly 23,000 dollar millionaires leave India.

According to data compiled by Ruchir Sharma, head of emerging markets and chief global strategist at Morgan Stanley Investment Management, and his team, 2.1% of India's rich left the country in 2017 alone, compared to 1.3% for France and 1.1% for China. In fact, India has lost the highest percentage of high net worth individuals (HNWI) - those with net assets of more than $1 million - to migration since 2014. "While some of the millionaires leaving may be desirable given the corruption drive, we have to be careful we do not throw the baby out with the bathwater, which is collateral damage of the regulatory overkill," Sharma told The Economic Times.

The raw data source for the above is global market research group New World Wealth, which maintains a database of over 150,000 HNWIs across 125 cities worldwide. The group's Global Wealth Migration Review for 2018, released last month, reveals that the Top 5 countries in terms of net exodus of HNWI are:

Though China saw a higher number of millionaires change their domicile compared to India last year, when you look at the outflow numbers as a share of the country's total millionaire population, the Indian Richie Rich exodus is nearly double that of its neighbours. Significantly, the report shows that the number of Indian HNWIs moving to greener pastures has been steadily going up over the years - from 4000 millionaires moving out in 2015 the figure jumped to 6,000 in 2016 and a further 16% in 2017. Apart from the government's tough stance on corruption, perhaps this spike can be attributed to the jump in bad loans in recent times, causing beleaguered businessmen like Vijay Mallya to flee the country.

While the exodus from Turkey is self-explanatory, the last two names on the list above are sure to raise eyebrows. "Over-taxation has become a problem in most major European countries. In particular, inheritance taxes are very high in France and the United Kingdom (around 40%). This could be one of the reasons why many HNWIs are now moving away from these countries," explains the report's author, Andrew Amoils. With France's new president, Emmanuel Macron recently slashing the contentious wealth tax, the outflow might ease somewhat. On the other hand, UK, which lost much of its shine post Brexit, might become even more unappealing for HNWIs in the future, especially if the US follows through on talks about scrapping inheritance taxes all together.

So, where are the migrating millionaires headed? Australia emerged as the top choice in 2017 - a whopping 10,000 HNWIs moved in - beating its main rival, the U.S., for the third year running. Over the past decade, the total wealth held in Australia has risen by 83% compared to 20% growth in the U.S. The latter posted an inflow of 9,000 millionaires last year. The other countries in the Top 5 in terms of HNWI inflow include Canada, United Arab Emirates and the Caribbean islands. The report added that Indian HNWIs' destination preference differed slightly, with USA on top followed by the UAE, Canada, Australia and New Zealand.

Here are the most popular cities across the globe for HNWI immigration (alphabetically), each posting inflows of over 1,000 millionaires last year: 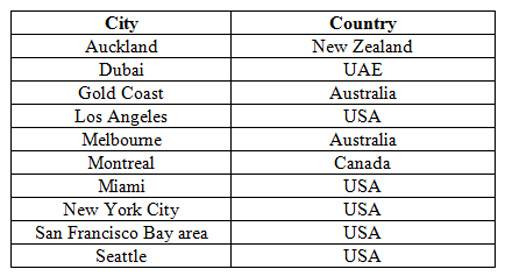 The report states that while the outflow of HNWIs from India is not particularly concerning as the country is still producing far more new HNWIs than it is losing, a spike in this number is usually bad news. "HNWIs are often the first people to leave. They have the means to leave unlike middle class citizens. If one looks at any major country collapse in history, it is normally preceded by a migration of wealthy people away from that country," said Amoils. He added that as the standard of living improves in India and China, he expects several wealthy people to move back home.