News
LATEST
Economy Politics
From British Raj to Billionaire Raj: How India's income inequality is worse in 2017 than in 1922

From British Raj to Billionaire Raj: How India's income inequality is worse in 2017 than in 1922

India's income inequality in 2017 may be worse than what it was during the British Raj. According to a paper titled 'Indian income inequality, 1922-2014: From British Raj to Billionaire Raj?' penned by renowned economist Thomas Piketty and Lucas Chancel, India witnessed a sharp rise in the incomes of top 1 per cent post 1980s.

The share of national income accruing to the top 1% income earners is now at its highest level since the creation of the Indian Income tax in 1922 during the British colonial rule. The top 1% of earners captured less than 21% of total income in the late 1930s, before dropping to 6% in the early 1980s and rising to 22% today, the paper said.

The study says the share of fiscal income accruing to the top 1 per cent of population shrank substantially from the mid-1950s to the mid-1980s, from about 13 per cent of fiscal income, to less than 5 per cent in the early 1980s. However, after India's economic liberalization when pro-business, market deregulation policies were implemented the situation was reversed, the share of fiscal held of the top 1% doubled from approximately 5 per cent to 10 per cent in 2000.

The paper stressed on the need for more democratic transparency on income and wealth statistics to avoid what it called another 'black decade' similar to the 2000s, during which India entered the digital age but stopped publishing tax statistics. 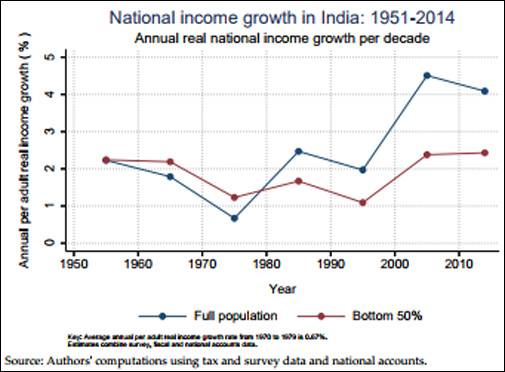 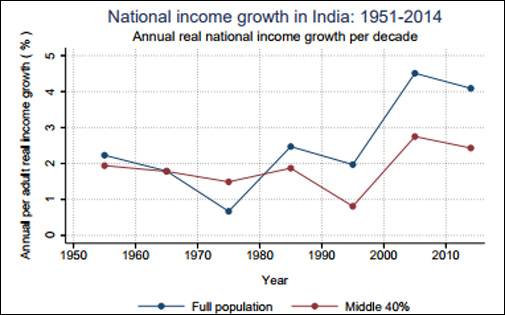 Such data sources are key to track the long run evolution of inequality and to allow an informed democratic debate on income patterns, it said.

Calling for a more inclusive growth in India, the paper said its findings reveals the unequal nature of liberalization and deregulation processes in the country. 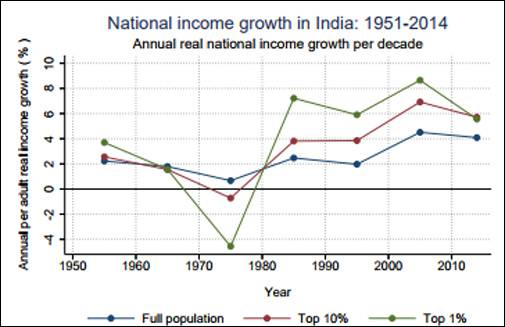 In 2016, the Income Tax Department released tax tabulations for recent years (2011-12, 2012-13 and 2013-14), making it possible to revise and update previously published top income estimates and better inform public debates on growth and income inequality in India, it added.