The current slowdown is the third slowdown since 1996 and will be the longest in the past 23 years if the next quarter's GDP is worse than 4.5%

India has seen six successive quarters of declining GDP growth equalling the longest slowdown in the past 23 years. The last time India had witnessed six straight quarters of slowdown was between March quarter of FY11 and June quarter of FY13.

The GDP growth in second quarter of the ongoing fiscal shrunk to 4.5 per cent from 5 per cent in the previous quarter. This is the sixth straight drop in India's quarterly GDP growth.

The current slowdown is the third slowdown since 1996 (India's quarterly GDP data is available from 1996) and will be the longest in the past 23 years if the next quarter's GDP is worse than 4.5%. The 2019 slowdown of Indian economy has been triggered by a mix of both internal as well as external factors such as synchronised global slowdown, demonetisation, poor implementation of GST, plummeting domestic automobile sales, flattening of core sector growth and declining investment in construction and infrastructure.

The slowdown has pushed Prime Minister Narendra Modi's dream of making India a $5 trillion economy by at least four years.

In early November 2019, Finance Minister Nirmala Sitaraman said: "It is too presumptive of me to say it [economic slowdown] has bottomed out," fueling speculation that India's economy is yet to see the worst of the ongoing downturn.

The rating agencies have corrected their forecast for the Indian economy by as much as 1.5% within a year, with Moody's lowering India's rating outlook to negative from the previously assigned outlook of stable.

In December 2019, PN Vijay, former BJP spokesperson said: "Everyone knows that there is a lack of demand in the economy and whatever Nirmala has done is on the supply side. She woke up too late and then was in denial mode till August and then in the budget she kept talking about, apart from quoting verses, $5 trillion economy, which seems to be the biggest joke." 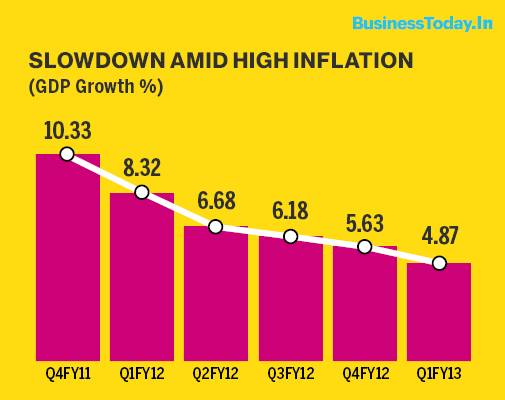 High inflation, fuelled by rising crude prices, had stoked the slowdown. The Wholesale Price Inflation (WPI) in Q1FY11 had touched 10.54%, which was significantly above the RBI's comfort zone of 5%-6%. Inflation had remained persistent despite the Reserve Bank of India (RBI) hiking the repo rate 13 times by a cumulative 375 basis points between March 2010 and October 2011.

The then Finance Minister Pranab Mukherjee had said: "India has to target a double-digit or near double-digit growth in the not too distant future. We must learn to sustain high growth over extended period of time." 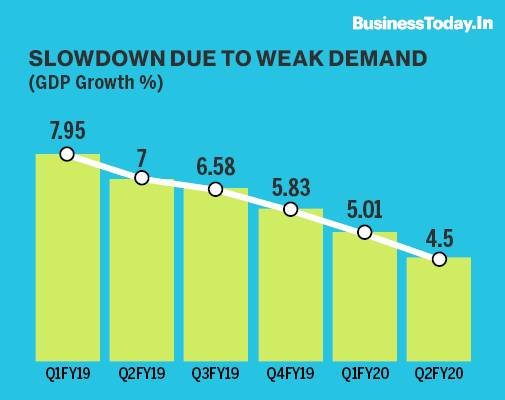 The main reason behind the 2009 slowdown was the global financial crisis of 2007-08, considered by many economist as the most severe financial crisis post the Great Depression of 1930s. The crisis occurred due to the bursting of the housing bubble in the US which had a trickledown effect on the rest of the world.

During the 2009 slowdown, PM Manmohan Singh took the additional charge of the Finance Ministry as the then Finance Minister P Chidambaram was transferred to Home Ministry after the terror attacks of 26/11 in 2008.