India's fiscal deficit will rise from the targeted 3.5% to 6% of GDP in FY21. Barclays has pegged consolidated government deficit (Centre and State) at 12% of GDP, compared to 8% earlier, implying overall borrowing need of close to Rs 25 lakh crore

"Accounting for the support measures unveiled on Sarturday (Rs 8,100 crore), and today (Rs 40,000 crore), we estimate that the government's fiscal support programme totals Rs 21 lakh crore, which includes Rs 8 lakh crore of measures announced by the RBI. However, we estimate that the actual fiscal impact on the budget will be only Rs 1.5 lakh crore (0.75% of GDP), based on our calculations and assumptions made during the series of announcements," Barclays said in its latest report. 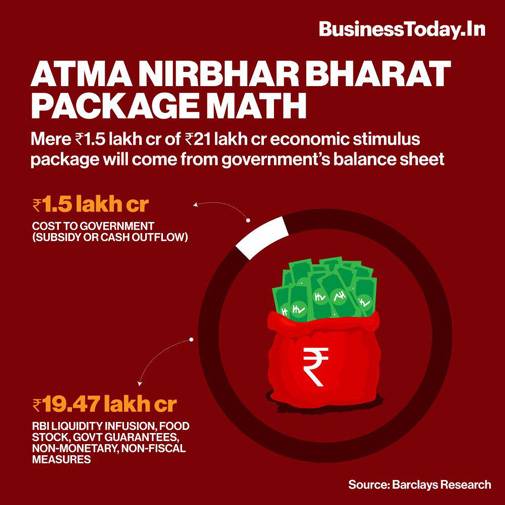 According to Barclays, India's fiscal deficit will rise from the targeted 3.5% to  6% of GDP during financial year 2020-21. The agency has pegged consolidated government deficit (Centre and State) at 12% of GDP, compared to 8% previously, which implies an overall borrowing requirement of close to Rs 25 lakh crore.

"We continue to believe that the government may end up with a fiscal deficit of close to 6% of GDP during FY20-21. While the increase in deficit limits for states might be subject to revision, we assume they will utilise their additional deficit headroom of 5% of GSDP, with a further 1% of off-balance sheet spending, which would put the consolidated government deficit at 12% of GDP, relative to 8% previously. This implies an overall borrowing requirement of close to Rs 25 lakh crore," the report noted.

Over the weekend, FM Sitharaman announced a series of regulatory reforms for sectors such as mining, power, airports, defence production, and atomic energy. Further announcements made on May 17 include a series of steps to provide employment opportunities for migrant workers, as well as material changes in bankruptcy rules, companies act among others.

The Finance Minister announced an additional outlay of Rs 40,000 crore for the Mahatma Gandhi National Rural employment guarantee scheme (MGNREGS), and every district will get multiple public health labs. Other announcements included steps to suspend bankruptcy initiation, decriminalisation of companies act to reduce litigation, and moves to improve access to capital for corporates.

Also Read: Govt allows private players to participate in all sectors, but 51% CPSEs are in services

As per Barclays report, states will also be allowed to raise their net fiscal borrowings to 5% of gross state domestic product (GSDP), which could increase state issuance by Rs 4.28 lakh crore. This increase is linked to states adhering to specific reforms in public distribution systems, ease of doing business, power distribution and urban body revenue sharing. This effectively allows the same increase in borrowing as by the central government, which increased its own issuance programme two weeks ago, it said.