Rebooting Economy I: Why stock market is booming when COVID-19-hit economy sinks

Contrary to popular notion, stock markets have repeatedly demonstrated since the 1929 Great Depression that their performance is not really linked to macroeconomic and business fundamentals

Here is a glaring paradox of modern economics.

When the global economy is sinking due to the pandemic shutdown stock markets (capital markets) are booming; allowing those at the top of the economic pyramid make wealth when billions of people are losing theirs.

The World Bank said in its 'Global Economic Prospects' report of June 2020 that the world economy was facing its worst recession since World War II and that the growth was expected to shrink (negative) by 5.2% in 2021. It also pointed out that "the largest fraction of economies experiencing declines in per capita output since 1870".

It projected the US economy to shrink by 6.1% in 2020 and that of India by 3.2% in FY21. (Most developed economies, including the US, count their fiscal years from January 1 to December 31; India counts its fiscal year from April to March and hence the difference in marking the current year).

Yet the grim reality has escaped stock markets, except for an initial blip in March.

On June 18, 2020, a US-based think tank, Institute for Policy Studies released its analysis of stock market data saying that the US billionaire wealth surged to $584 billion, or 20%, during the pandemic, between March 18 (rough starting date of the pandemic shutdown) and June 17, 2020 - when most economic restrictions were in place.

The report, which analysed stock market performance, said during the same period, 45.5 million Americans had filed for unemployment. In the first quarter (January to March 2020) $6.5 trillion in household wealth had vanished. The US GDP tanked to a negative 4.8% in the first quarter, the first negative reading since Q1 of 2014.

A similar situation is evident in India.

Business Today magazine's latest issue (July 12, 2020) provides startling information. Describing the market rallies during the pandemic lockdown as "a lot of bull", it drew attention to three things: (i) India's economy is projected to shrink (negative) 6.8% in FY21, according to the SBI's projections (World Bank projected a shrink by 3.2%) (ii) growth in Q4 of FY20 was slowest in 11 years at 3.1% and (iii) early corporate results showing sharply shrinking top lines and bottom lines.

Just as it happened in the US, the Indian stock market has rallied through the lockdown after an initial dip in March, driven by a handful of stocks. Between March 23 (national lockdown started from midnight of March 24-25) and June 12, Business Today said, 10 stocks accounted for 75% of the rise. The current stock market rally is not an isolated incident. 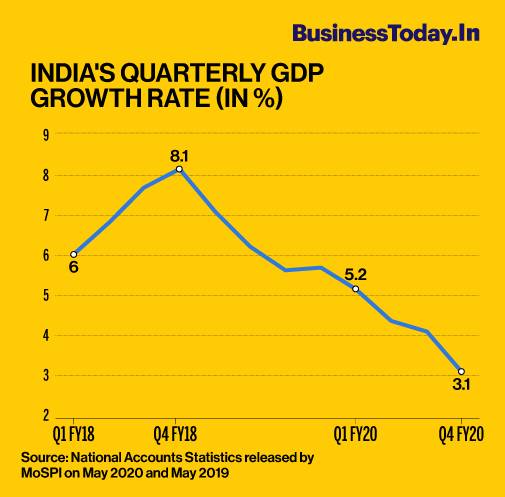 The stock market rally until Q4 of FY20 is all the more perplexing since the GDP numbers are known to be grossly exaggerated due to multiple downward revisions of previous quarter numbers, thereby making subsequent numbers look better than what they are.

Post-March rally has happened despite the fact that the lockdown has hit the economy hard and growth for at least the next two quarters is expected to be negative (first-quarter numbers will come out in August). 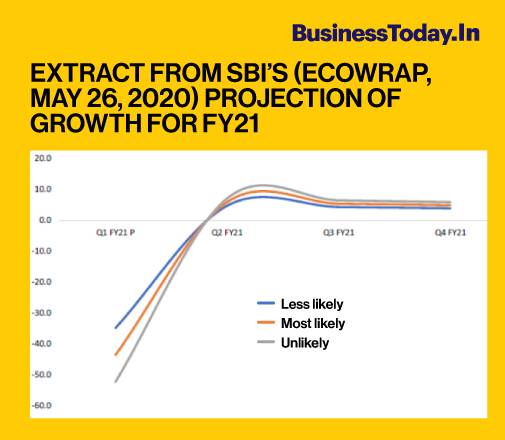 What is then driving the stock markets?

It says that in Q4 of FY20, the net profit of 532 companies fell by 39.5% - as against a growth of over 59% in Q4 of FY19. Their revenue performance was worst in 12 quarters (4.7% fall). The non-essential consumer goods, NBFCs, real estate are expected to see sharp cuts in earnings. The banking NPAs are expected to go up.

Top three stocks - RIL, HDFC, and Infosys - added Rs 6.3 lakh crore to their market capitalisation between March 23 to June 12 and accounted for 43% of the rise "despite a relatively poor show in the March quarter (January-March 2020)". RIL, for example, reported its steepest drop (of 39%) in quarterly profit in at least a decade (at Rs 6,348 crore) as its refining business took a hit due to the collapse of crude oil prices. Its FY20 net profit was Rs 39,880 crore.

Further, while the current downturn is expected to be far bigger than the Great Recession of 2007-08, the price-to-earnings (PE) ratio indicates that the value of stocks is way too high. The report said, "Sensex is at almost double the PE ratio it commanded during the peak of the Lehman crisis". As of June 18, the PE of S&P BSE Sensex was 21.81, while that of the US Dow Jones was 19 and China's Shanghai SE Composite 14.9.

What all this means is that stock prices are disconnected from the real economy.

Did the delinking happen now?

It has been pointed out that the Indian stock markets had discounted massive economic shocks of demonetisation and GST that derailed the economy in 2017, and bank failures (PMC, Yes Bank), NBFC crisis (IL&FS, DHFL) and growing NPAs in the subsequent years that prevented the economy from bouncing back.

The upward trend in the stock markets continues amidst the trade war against China. Amid rising clamour to boycott Chinese goods, imports from China have been held up at Indian ports, which the Minister for Micro, Small and Medium Industries Nitin Gadkari objected to saying that this will harm local businesses that have already paid for these goods.

Far more critical is that such hold-ups may impact production of key COVID-19 drugs remdesivir and favipiravir and other life-saving drugs in India, leading to country-wide shortage and endangering the lives of millions of Indians. India imports two-thirds of its active pharmaceutical ingredients (APIs) and formulations from China.

Some experts suggest that the delinking of stock markets happened in recent times (2015, according to one). But this delink was evident during the massive market crash of 2008 and earlier in 2000-01 when the dotcom burst happened.

Globally, this break down has been evident since the 1929 Great Depression. That is nearly a hundred years of historical evidence.

It needs no elaboration that stock market bubbles build up when the link with real economy (macroeconomic and business fundamentals) is broken. Valuation of stocks reaches irrational highs, leading to an eventual crash (unless timely rescued with taxpayers' money).

Reason for the market boom

Why stock markets are booming when economies are burst is not unknown.

For one, it has a great deal to do with liquidity infusion.

In the US, the Federal Reserve has not only reduced interest rate to near zero (0.25%) to create more liquidity but also decided, as part of its stimulus, to buy corporate bonds from open market (quantitative easing). That the latter means public money being used to prop up private interest is not something that modern economics despises.

There is more support waiting. Should there be a market crash, more taxpayers' money would be ploughed in to protect private investors, as happened during the Great Recession of 2007-08.

In India, it happens even without massive crashes of the 2007-08 proportion.

It is no secret that every time market falls sharply, the government instructs public sector undertakings like the LIC and SBI to step in quickly, buy stocks and boost "market sentiment". That this rush job is potentially dangerous for these PSUs escapes attention.

For another, it is the lure of gambling.

Making a quick buck through speculative activities (betting) is an old human vice.

But lowering the interest rate to near zero in the US further incentivises people to borrow money virtually free of cost to invest in stock markets. This is one reason why the US stock market has made a swift recovery.

With the Federal Reserve watching their back, it is fun to bet in the stock market. Stock traders know the Fed will protect the long-term profitability of big corporations with taxpayers' money.

In India, the RBI has been reducing headline interest rates. Though it has not reached near zero yet (repo rate is 4%), it has generated additional liquidity of Rs 8.1 lakh crore. Most of it is being parked in the RBI's own reverse repo account, reflecting the futility of liquidity infusion. On June 26, Rs 6.35 lakh crore was parked in this account. On many occasions in May, the reverse repo deposits had crossed the Rs 8 lakh crore mark.

Nobel laureate Joseph Stiglitz has been stinging in his criticism of the speculative activities in stock markets.

In his 2019 book 'People, Power and Profits', Stiglitz writes: "In many ways, the stock market is just a rich person's casino. And while gambling may afford some short-term pleasure, money simply moves from one person's pocket to another. The gambling - and short-term trading - doesn't make the country richer or more productive, and it often ends in bitter tears on the part of one party or the other."

To that extent, stock market activities are a zero-sum game in which some gain at the cost of others. Why does the game never end at some point?

Apart from low-interest money, more people join the game, bringing in fresh money to keep the game going. One leading Indian economist once remarked that stock markets are the biggest Ponzi schemes around.