The study noted that the most significant disruptions have been in the turbulent Kashmir region, where after intermittent shutdowns during the first half of the year, access has been blocked since August, with no end to restrictions in sight

With internet blackouts lasting for 4,196 hours in 2019, India has lost over $1.3 billion in economic terms. This places the country on the third spot among world's most affected countries economically after Iraq and Sudan, reveals a report.

The report 'The Global Cost of Internet Shutdowns in 2019' by internet research firm Top10VPN says that India with 8.4 million internet users imposes internet restrictions more often than any other country. Over 100 shutdowns were documented in 2019. As they tend to be highly-targeted, even down to the level of blacking out individual city districts for a few hours while security forces try to restore order, many of these incidents have not been included in this report, which instead focussed on larger region-wide shutdowns. The full economic impact, therefore, is likely to be higher than our $1.3 billion figure, the report added.

The study noted that the most significant disruptions have been in the turbulent Kashmir region, where after intermittent shutdowns during the first half of the year, access has been blocked since August, with no end to restrictions in sight. The shutdown is now the longest ever imposed in a democracy.

"Elsewhere violent reactions in December to another change to Indian law, which has been viewed as another bid to marginalise the country's Muslim minority, prompted internet blackouts across many districts of Uttar Pradesh, along with the nearby regions of Arunachal Pradesh, Tripura, Assam and Meghalaya," the report added.

The other major shutdowns also had its root in religious tensions. The Supreme Court's ruling on the dispute over the Ayodhya holy site between Hindus and Muslims prompted shutdowns "to avoid the spread of misinformation" in Aligarh, Uttar Pradesh, and also in the Rajashthan region, revealed the report.

With 18.8 internet million users, Iraq was the most hit due to 263 hours of blackouts costing around $2.3 billion. The most significant internet blackouts were in October amid anti-government protests due to rising unemployment, failing public services and corruption, the report said. The Middle East & North African regions had the highest share of around 39 per cent in total economic cost of all major internet shutdowns in 2019. This was followed by 26.8 per cent by the Sub- Saharan African region and 21 per cent by Asia. The report has included both social media shutdowns and internet blackouts for their calculations. WhatsApp was most-blocked platform with 6,236 total hours of disruption followed by Facebook that blocked the internet for 6,208 hours. The duration of other social media shutdowns include Instagram (6,193 hours), Twitter (5,860 hours) and YouTube (684 hours). 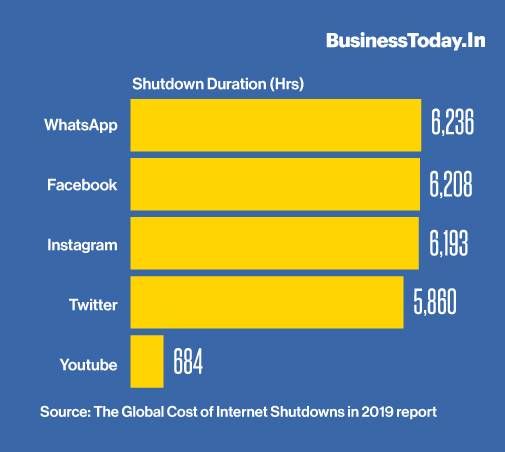