Locust swams attack in Delhi, Mumbai: Locusts tend to attack vegetation, which will keep them from entering homes and causing harm to people, but they will remain a nuisance till wind direction changes

Locust swarm has infested many areas in Rasjasthan, Madhya Pradesh, Uttar Pradesh, Maharashtra and Gujarat in the past two weeks
Mukesh Adhikary

Residents living in urban areas should not be worried about any physical harm from a locust attack, according to an official from Ministry of Agriculture's Locust Warning Organisation.

"Locusts don't attack people. They only go after vegetation. It has never happened that locusts have entered houses. Don't fall for the misinformation," the official said.

"It only attacks vegetation and moves along with the wind. If an urban area with no vegetation falls on the way, it crosses it, but doesn't attack," the official added. Possible desert locust attack has created panic among residents in urban areas such as Delhi and Mumbai, who are already living in fear amid growing number of coronavirus cases.

While the risk of any harm to humans does not quite arise, Delhi authorities are taking precautions, including spraying disinfectants, to protect the vegetation in the region. "As the swarms usually fly in the day time, the locust should not be allowed to rest at night," the advisory issued by Joint Director of Agriculture AP Saini says. It further suggested spraying of chemicals - malathion, chloropyriphos - as per need.

The closest swarm of locusts from Delhi has been reported from Dousa in Rajasthan, which is at a distance of 285 kilometres from the national capital. Dousa is closer to Rajasthan's Jaipur at a distance of near 60 kilometres. The swarm was controlled by the Locust Control Department on Friday morning, the official confirmed.

Locusts are small insects from the grasshoppers' family, which form massive swarms to devour crops. They cause serious agricultural damage and are a menace in many parts of the world with breeding grounds in sub-Saharan Africa, Middle East and South Asia. These insects are not a cause of concern till they are solitary, but during dry spells they come together in search of food. Interestingly, as they gather there's a release of serotonin in their central nervous system (CNS) which brings about behavioural changes, which includes entering what's called a gregarious state in which they travel fast in swarms and devour crops. Rains result in fertile breeding ground for these locusts.

The locusts that have attacked parts of India have come from Pakistan. They crossed over to Indian territory in April end and they will remain a threat till wind direction changes, since the movement of locusts completely depends on wind direction.

"If the wind direction changes towards Pakistan, it will all move to Pakistan. If the wind movement is from Pakistan towards India, the locusts there will come to India. They fly with the wind," the official from Locust Warning Organisation added. 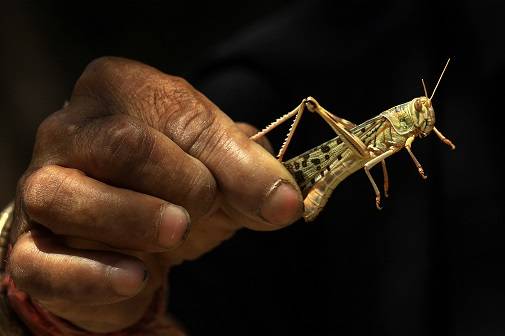 Department of Agriculture, Corporation and Farmers' Welfare has said that swarms were observed in Rajasthan's Jaisalmer, Barmer, Phalaodi, Bikaner, Nagaur, and Ganganagar areas in the first fortnight of May.

Control operations to stop the movement of the swarms were made in an area covering 21,675 hectare. But swarms of locusts have spread to many areas in Madhya Pradesh, Uttar Pradesh, Maharashtra and Gujarat in the past two weeks.

Meanwhile, the Agriculture Ministry is equipping plant-protection workers to fight locusts. The ministry said on Thursday that 15 sprayers will be procured from the UK, while drones and helicopters will be deployed for aerial spray of pesticides. 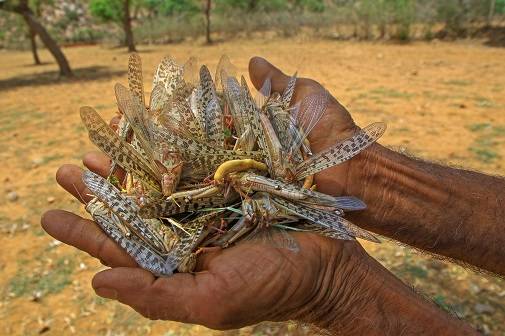 "15 sprayers will start arriving from Britain in the next 15 days. Besides, 45 more sprayers will be procured in a month or one-and-a-half months," Agriculture Minister Narendra Singh Tomar said.

He also added that 11 Regional Control Rooms have been set up and larger teams have been deployed to check the spread of locusts in affected areas. Temporary control camps have been set up at Jaipur, Chittorgarh, Dausa in Rajasthan; Sheopur, Neemuch, Ujjain in Madhya Pradesh and Jhansi in Uttar Pradesh.