Why rupee may breach 75 mark against US dollar anytime soon

With volatility in the market taking a toll on indices and individual stocks this year, the Indian rupee came under severe pressure and hit its all-time low of 73.41 against the US dollar today.

With volatility in the market taking a toll on indices and individual stocks this year, the Indian rupee came under severe pressure and hit its all-time low of 73.41 against the US dollar today.

Of late, the fall in Indian currency can be attributed to global and domestic cues. Brokerages have become cautious setting lower targets for rupee due to deteriorating conditions for the currency at home and abroad.

In fact, DBS Bank forecast says that the currency will slide to as weak as 75 per dollar. UBS Securities India too cut its year-end forecast to 73 from 66, while Scotiabank saw the rupee nearing 74 in the run up to the Federal Reserve meeting.

Here's a look at factors why the currency could hit the 75 level against the US dollar anytime soon:

High crude oil price: Of late, crude oil prices have been on a boil. Brent crude oil prices breached the $85 per barrel for the first time in over four years yesterday on the back of tightening oil market and OPEC leaders signalling they won't be immediately raising the output.

Currently, brent crude price is trading at $84.92 per barrel. The brent crude oil price has risen 27.68 per cent from 66.57 level since the beginning of this year.

India imports 81 per cent of its crude oil needs and is the third-largest importer of oil after US and China.

Since payment of crude oil prices is done in dollars, a higher crude rate leads to more amount of rupee being converted to dollar, thereby strengthening the US currency.

Rupee dollar rate is a function of demand and supply. When demand for dollar is high, rupee becomes weak and when dollar demand is low, the Indian currency gains.

Worse, forecasts see oil at $100 per barrel within an year.

Oil prices could rise towards $100 per barrel by 2019 as US sanctions against Iran tighten markets, commodity merchants Trafigura and Mercuria said.

This will be bad news for the Indian currency since high crude oil prices will lead to a rise in high current account deficit.

A burgeoning current account deficit (CAD) has become a big worry for the home currency. CAD in the first quarter of this fiscal widened to $15.8 billion, which is around 2.4 per cent of the country's Gross Domestic Product (GDP), as compared with $15 billion in the corresponding quarter a year before.

In the January-March quarter, the trade shortfall stood at 1.9 per cent of the GDP.

A rise in the current account deficit leads to depreciation in the value of rupee since more quantity of local currency needs to be utilised for payment of higher imports.

Meanwhile, Bank of America Merrill Lynch has widened its current account deficit (CAD) estimate by 0.20 per cent to 2.8 per cent of GDP for fiscal year 2018-19 citing high crude oil prices which the brokerage said can reach up to $95 by June 2019.

It also raised its forecast by 0.10 per cent to 2.9 per cent in FY'20 with oil strategists hiking Brent forecasts, the brokerage said.

Economists expect the CAD to rise to 2.7-2.8 per cent of the GDP this year year on higher imports of electronic goods and rising oil prices.

Overseas investors pulled out a massive Rs 21,000 crore ($3 billion) from the capital markets in September, making it the steepest outflow in four months, on widening current account deficit amid global trade tensions.

Since the beginning of this year, FPIs have withdrawn Rs 63,864 crore from Indian markets, putting pressure on the Indian currency which is down over 13 per cent during the same period.

The Real effective exchange rate (REER) signals the competitiveness of a country's currency in comparison to a basket of currencies, adjusted for inflation effects.

It calculates the purchasing power of a currency by adjusting the nominal exchange rate for inflation effects.

When the currency is overvalued, domestic prices are higher by international standards and domestic producers are not competitive. 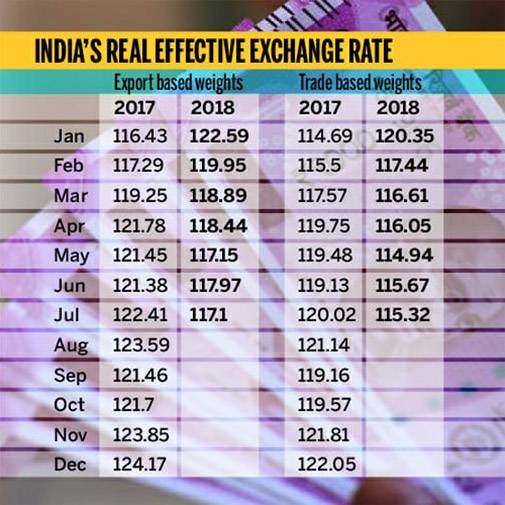 When the currency is undervalued, domestic prices are lower by international standards and domestic producers are more competitive than their foreign counterparts.

In July this year, trade-based weights data for REER stood at 115.32.

In terms of export-based weights, REER value stood at 117.1 pointing to 17.1 per cent overvaluation for the Indian currency. It closed at 68.45 level on July 31 compared to 68.54 in the beginning of that month.

A level above 100 signals the rupee is overvalued while a level below 100 shows that the currency is undervalued.

Since, the currency is still overvalued after falling nearly 13 per cent on an year-to-date basis, chances are high that rupee may fall further in order to become fairly valued.

The dollar is hovering near 10-week high level ahead of the 95.27 after the US Federal Reserve raised its benchmark interest rate to between 2-2.25 per cent on Wednesday in its ninth increase since late 2015.

Before the Federal Reserve raised rates, the dollar was trading at 94.14 level.

The US dollar index has risen over 2 per cent since the beginning of this year.

such as rupee which are sensitive to the Federal Reserve's balance sheet unwinding.

Another hike is expected later this year, with more to come in 2019.

A stronger dollar is not good news for the Indian currency which is down over 13 per cent since the beginning of this year. This might accelerate its fall to the 75 level in the near future.

The Federal Reserve raised a key interest rate for the third time this year in response to a strong US economy and signaled that it expects to maintain a pace of gradual rate hikes.

The Fed on September 26 lifted its short-term rate - a benchmark for many consumer and business loans - by a quarter-point to a range of 2 percent to 2.25 per cent.

It was the eighth hike since late 2015. A rate hike by Federal Reserve will lead to a rise in US treasuries yield and act as an incentive for foreign funds to park their money into the US markets since they will get higher returns for their investment.

This will lead to foreign fund outflows from the Indian market as rate hike will lower investment returns for foreign investors and prompt them to sell. That will be bad news for rupee since the dollar will become stronger in the global currency market.