'Desperate times call for desperate measures', the phrase by the ancient greek physician Hippocrates is quite apt amid the spread of Covid-19 pandemic as the Reserve Bank of India announced a massive 75 basis points (bps) cut in repo rate coupled with 100 bps reduction in cash reserve ratio (CRR) to mitigate its impact on the economy. The reverse repo rate too was slashed by 90 bps to reduce financial stress on banks and encourage them to lend more to businesses.

The central bank reduced the CRR to 3 per cent, which means more cash in the hands of banks to deploy it in the market. Also, this is first time since 1973 that the CRR has gone below 4 per cent. The reduction in CRR was last done in February 2013 by 25 bps and since then it has remained at 4 per cent, although, it last touched 4 per cent in 1974. Additionally, this is the first time that all the three key policy rates were reduced/revised at the same time. To be precise, a CRR reduction or revision was never coupled with repo or reverse repo rate revision since the central bank was nationalised in 1949. Moreover, the corridor between the repo and reverse repo rate has been hiked in this effort. With a reduction in the policy repo rate to 4.40 per cent from 5.15 per cent and reverse repo to 4 per cent from 4.9 per cent earlier, the current margin increases to 40 basis points from the existing 25 basis points. This margin was reduced to 25 basis points in 2017 from a 50 basis points in 2016. The reduced repo rate of 4.40 per cent is yet again the lowest policy rate India has seen so far. 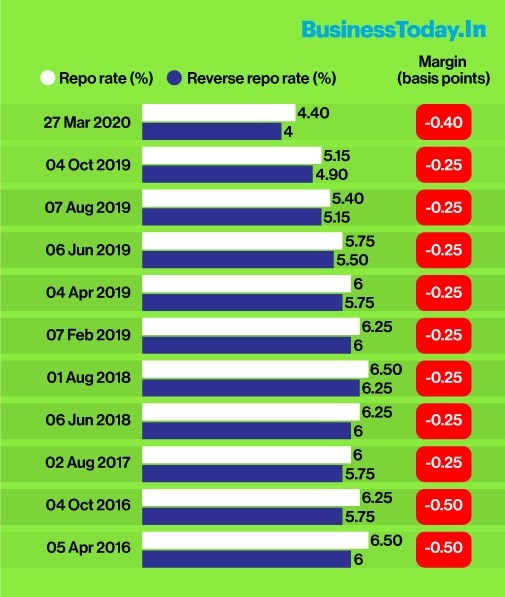 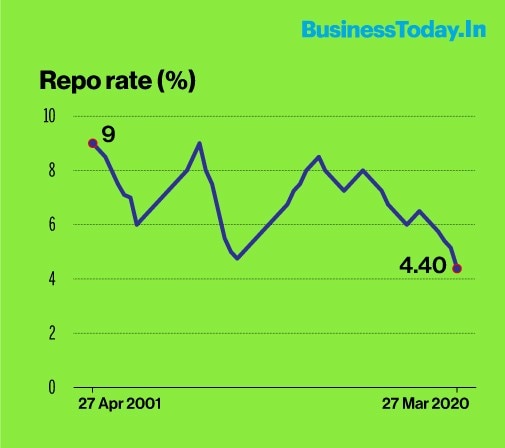 A slew of measures including Rs 3.74 lakh crore liquidity boost announced by the RBI for the financial markets was directed at easing the pain in the domestic economy and was welcomed by industry experts and analysts. "Overall, although some of us were complaining about the delayed response from the RBI to the disruptions led by Covid-19, today's massive package delivers more-than-expected and thus, effectively, provides massive comfort to the financial system. Notably, while the banking system was already in liquidity surplus for the past 9-10 months, additional liquidity will help boost sentiments. Further, while demand-side and risk-aversion constraints continue to remain as valid as pre-Covid-19, reduction in CRR and addition limit under marginal standing facility (MSF) could address the supply constraints. The temporary regulatory relief for the financial sector and the relaxation for their borrowers deliver the need of the hour. The facts that the TLTROs are now attached to their deployment with 15 working days and banks will earn almost 75-115bp lower on their excess money parked with the RBI actually nudge the banking system to start putting money at use into the real economy," said Nikhil Gupta, Chief Economist, Motilal Oswal Institutional Equities in a note.

The central bank's function of conducting monetary policy has undergone a sea change in various respects from time to time. It is interesting to note that the Reserve Bank came into being in the backdrop of the great depression facing the world economy. Monetary policy frameworks in India has thus evolved in line with the developments in theory and country practices, the changing nature of the economy and developments in financial markets.  "One of the major challenges for central banks is the assessment of the current economic situation. As we all know, the precise estimation of key parameters such as potential output and output gaps on a real time basis is a challenging task, although they are crucial for the conduct of monetary policy. In recent times, shifting trend growth in several economies, global spillover effects and disconnect between the financial cycles and business cycles in the face of supply shocks broadly explain why monetary policy around the world is in a state of flux. Nonetheless, a view has to be taken on the true nature of the slack in demand and supply-side shocks to inflation for timely use of counter cyclical policies," the RBI Governor highlighted in a speech in January at St. Stephen's College, University of Delhi.