Budget 2022: Can it balance GDP growth and fiscal discipline?

The Union Budget 2022-23 has to strike a balance between pushing the output or GDP and maintaining fiscal consolidation in order to keep a check on public debt, which is now 90 per cent of the GDP.

Experts are estimating central government borrowings at an elevated level in 2022-23.

The interest payments on public debt eat away one-fifth of the funds of the Union Budget every year.

And the share of interest payments, which is much higher than the money allocated for subsidies for poor (9 per cent) , Defence (8 per cent ) and pensions (5 per cent), is expected to consume a larger pie of the Budget money in the future if the high Budget deficits go unchecked.

The Union Budget 2022-23 has to strike a balance between pushing the output or GDP and maintaining fiscal consolidation in order to keep a check on public debt, which is now 90 per cent of the GDP.

The last economic survey 2021 had strongly argued that growth leads to debt sustainability in the Indian context but fiscal austerity does not necessarily foster growth. "This is because the interest rate on debt paid by the Indian government has been less than India's growth rate," it reasoned. But with the interest rate rising on the back of high inflation, the growth rate has to be higher once the economy normalises. Currently, the total interest payments on debt accumulated by the government are over Rs 8 lakh crore. To put it in perspective,  this amount is equal to the combined budgeted defence outlay of Rs 3.4 lakh crore and government grants to the state government of Rs 5.57 lakh crore in 2021-22.

In comparison to revenue collections, the annual interest burden of Rs 8 lakh crore is also much higher than the taxes on income at Rs 5.61 lakh crore or corporation tax mobilisation of Rs 5.47 lakh crore budgeted for 2021-22.

Experts are estimating central government borrowings at an elevated level in 2022-23. The research team of the Bank of Baroda has said that the gross borrowings are expected to be between Rs 12-13 lakh crore in 2022-23. This will be slightly higher than the Rs 12.05 lakh crore planned in 2021-22.

"This is likely to put pressure on the yields which are expected to touch the 7 per cent mark in FY23, albeit in a gradual manner," it says. Bank of America Securities has said that they see total gross borrowing of Rs 13 lakh crore in 2022-23. "We are cognizant of the limitations to National Small Savings Fund (NSSF)  inflows as a source of funding the fiscal," states the research report. 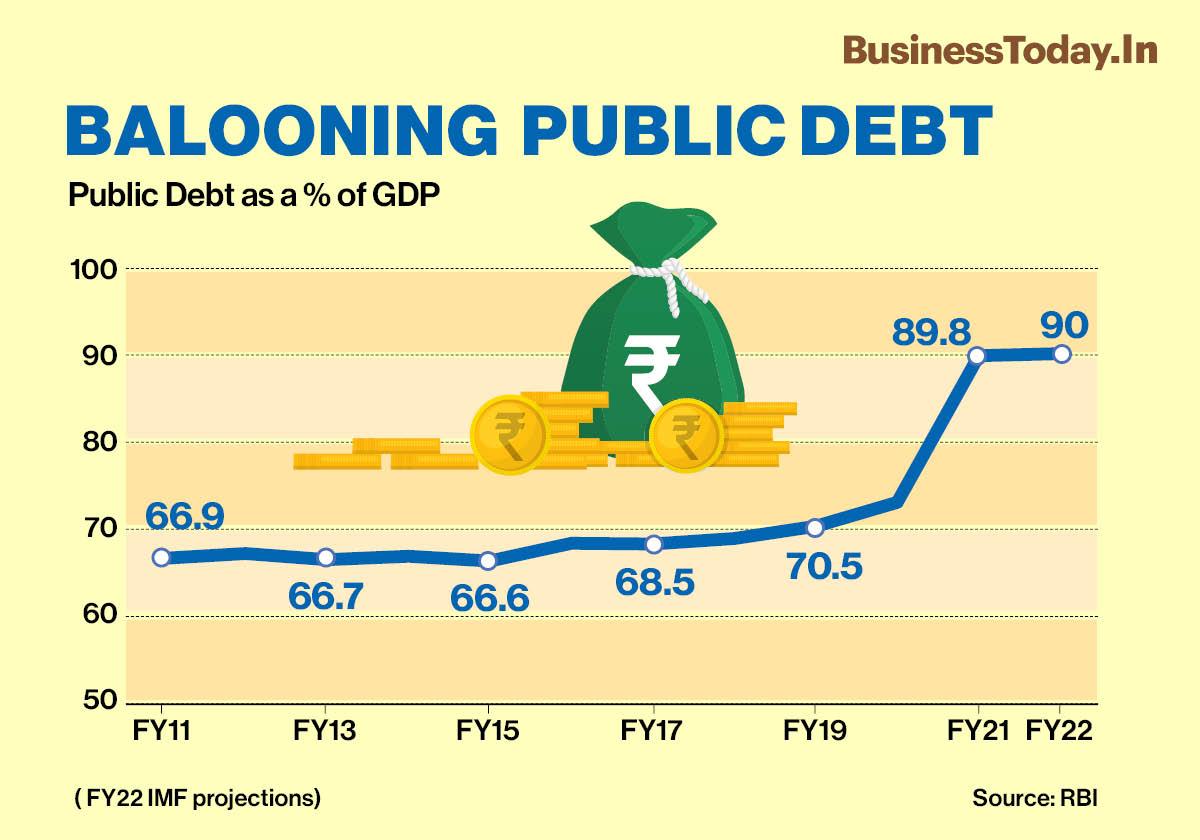 The rising government borrowings are the outcome of a ballooning fiscal deficit with no credible time frame for fiscal consolidation in the last decade. The pandemic has already pushed the fiscal deficit to 9.5 per cent in the first pandemic year 2020-21. The government had to roll out the AtmaNirbhar Bharat package, including the liquidity support by the Reserve Bank of India, which was around Rs 2 lakh crores,  equal to 13 per cent of GDP.

The fiscal deficit is pegged at 6.8 per cent in 2021-22. The government has targeted to reach a fiscal deficit level below 4.5 per cent of GDP by 2025-2026 with a fairly steady decline over the period.

Another worrying factor is the state government's finances. In 2020-21, the states' gross fiscal deficit breached 3 per cent of GDP due to pandemic outbreak and loss of revenues. The RBI in its report on states has said spillovers are expected in 2021-22 as well. Currently, the combined fiscal deficit of centre and the states is around 10 per cent.

The public debt to GDP, which was less than 70 per cent before the pandemic, for last two decades has reached the level of 90 per cent on account of higher borrowing and lower GDP. Given the lower output or GDP in the near future, it is very important to adhere to the path of fiscal consolidation, say experts.

The fresh borrowings from the market is also expected to come at a higher interest rate for the government. The 10- year G-sec yield is currently at around 6.6 per cent. In fact, the RBI's accommodative monetary policy, with low-interest rates and surplus liquidity, had kept the yields below 6 per cent for a long time after the outbreak of the pandemic. As per RBI statistics, the borrowing programme of the government in the first half was carried out smoothly with the 10-year g-sec yield remaining in the range of 5.97 to 6.26 per cent.

But this trend has reversed now as inflation, which is at an elevated level is pushing the yield upwards.

Some defend by saying that the rising public debt has been a global phenomenon post-pandemic. "The Covid-19 shock has lifted debt to GDP ratios across the region," says a research note of Morgan Stanley.

Also Read: Ola gears up for a new future factory for its electric car