Growth of venture capital (VC) deal value and volume in India has surpassed China's in the first three quarters of this calendar year, thanks to the rising investor caution on the neighboring country's crackdown on its technology industry.

Growth of venture capital (VC) deal value and volume in India has surpassed China's in the first three quarters of this calendar year, thanks to the rising investor caution on the neighboring country's crackdown on its technology industry.

VC investors have poured in about $20 billion into Indian companies during the first nine months of 2021, which marks an increase of 150 per cent from the same period last year as against a 97 per cent growth in China where deal value increased from $34 billion to $67 billion, according to data from the tech intelligence firm, CB Insights.

India's VC deal volumes and values reached record highs in the third quarter of this calendar with 519 companies raising a total of $9.9 billion compared to $3.3 billion across 288 deals in the same period in 2020. Early-stage deal share in India's venture capital funding grew up to 75 per cent till October 2021 as against 58 per cent in China. 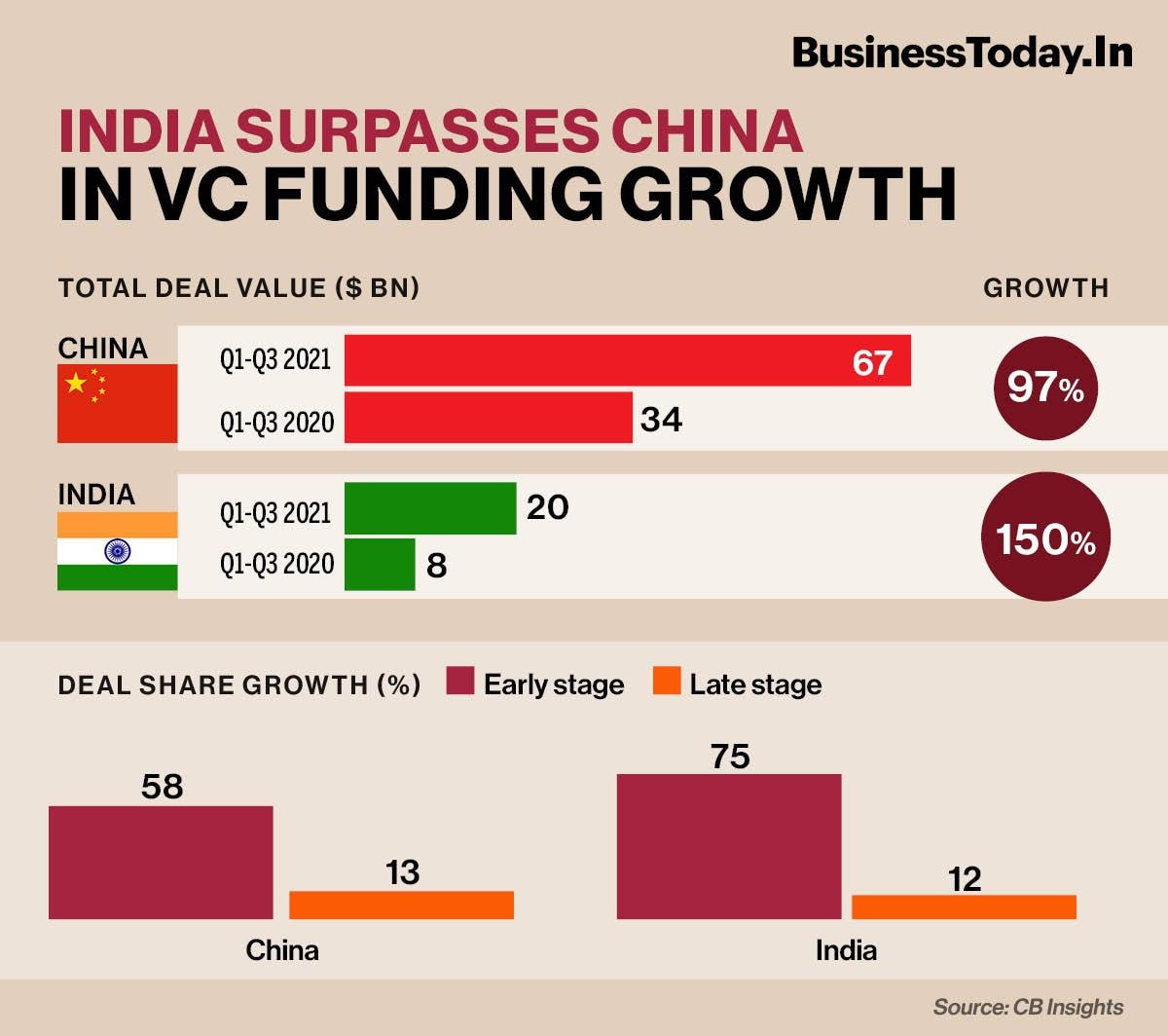 According to a study by Asian Venture Capital Journal, as reported by Financial Times, for every dollar invested in Chinese tech firms, VC funds put in $1.50 on Indian tech start-ups during the July-September quarter. The report further added that growth stage deals in India's tech sector grew 287 per cent during the first half of the year against a 118 per cent increase in China while number of deals until October jumped 62 per cent versus a 47 per cent growth in the Chinese tech sector.

The growth slump in Chinese venture capital funding could be the result of authorities increased scrutiny of tech companies in the country. The government's months-long regulatory crackdown has impacted several leading tech firms across sectors such as e-commerce, education, gig economy, and online insurance.  The crackdown has wiped off more than $1 trillion of collective market capitalisation of some of China's tech giants including Tencent and Alibaba since February.

The CB Insights report titled 'State of Venture' that analyses dealmaking, funding, and exits in private-market companies revealed venture capital funding in China grew 26 per cent quarter-on-quarter (QoQ) in Q3 (calendar year) to reach $25.5 billion while funding in India jumped 68 per cent QoQ and an astounding 195 per cent YoY to $9.9 billion. Four Indian start-ups -- Delhivery, Swiggy, Pine Labs, and Shiprocket -- were among the top ten companies globally that raised funding in Q3'21 by Mosaic score, a quantitative framework that CB Insights deploy to measure and predict the health and future success potential of private tech companies.

With 33 deals contributing 0.9 per cent of total Asia quarter deals, Sequoia Capital India was the only Indian VC in the list of top 10 Asia-based investors in Q3 by company count.

As per a recent report jointly published by IVCA and EY -- which has taken into consideration all private equity and venture capital investments in India -- the PE/VC deal activity significantly exceeded the previous all-time highs.