Year Ender 2021: “India is in the midst of a start-up boom, more than doubling its unicorns to take the country’s official tally of unicorns to 54," said Anas Rahman Junaid, MD and Chief Researcher at Hurun India.

India had a great year in terms of the number of new unicorns. It was third only to the US and China, and overtook the UK. There were 54 unicorns from India, up by a significant number of 33. The most successful unicorn from India is edtech giant Byju’s with a valuation of $21 billion. It is ranked 15th globally.

The Hurun Research Institute’s Global Unicorn Index 2021 is a ranking of the world’s start-ups founded in the 2000s, are worth at least a billion dollars, and are not listed on a public exchange. The cut-off date for the list was November 30.

Anas Rahman Junaid, MD and Chief Researcher at Hurun India said, “India is in the midst of a start-up boom, more than doubling its unicorns to take the country’s official tally of unicorns to 54, and overtake the UK to third place in the world. Whilst there are a further 65 unicorns founded by Indians abroad, mainly in Silicon Valley, the percentage of homegrown unicorns has increased from one third to 45 per cent, suggesting that the start-up ecosystem in India is maturing.”

Hurun Report Chairman and Chief Researcher Rupert Hoogewerf said that countries with the most unicorns indicate a more dynamic economy. Forty-two economies can boast at least one unicorn, up from 25 countries two years ago. But Russia, Saudi Arabia and Poland are amid 160 countries without a single known unicorn. Thirteen have produced unicorns for the first time, including Mexico, the Netherlands, Bahamas, Belgium, Chile, Czech Republic, Denmark, Norway, Senegal, Thailand, Turkey, UAE, Vietnam.

Byju’s, InMobi, OYO, Razorpay and Ola are also ranked in the top 100 unicorns in the world. 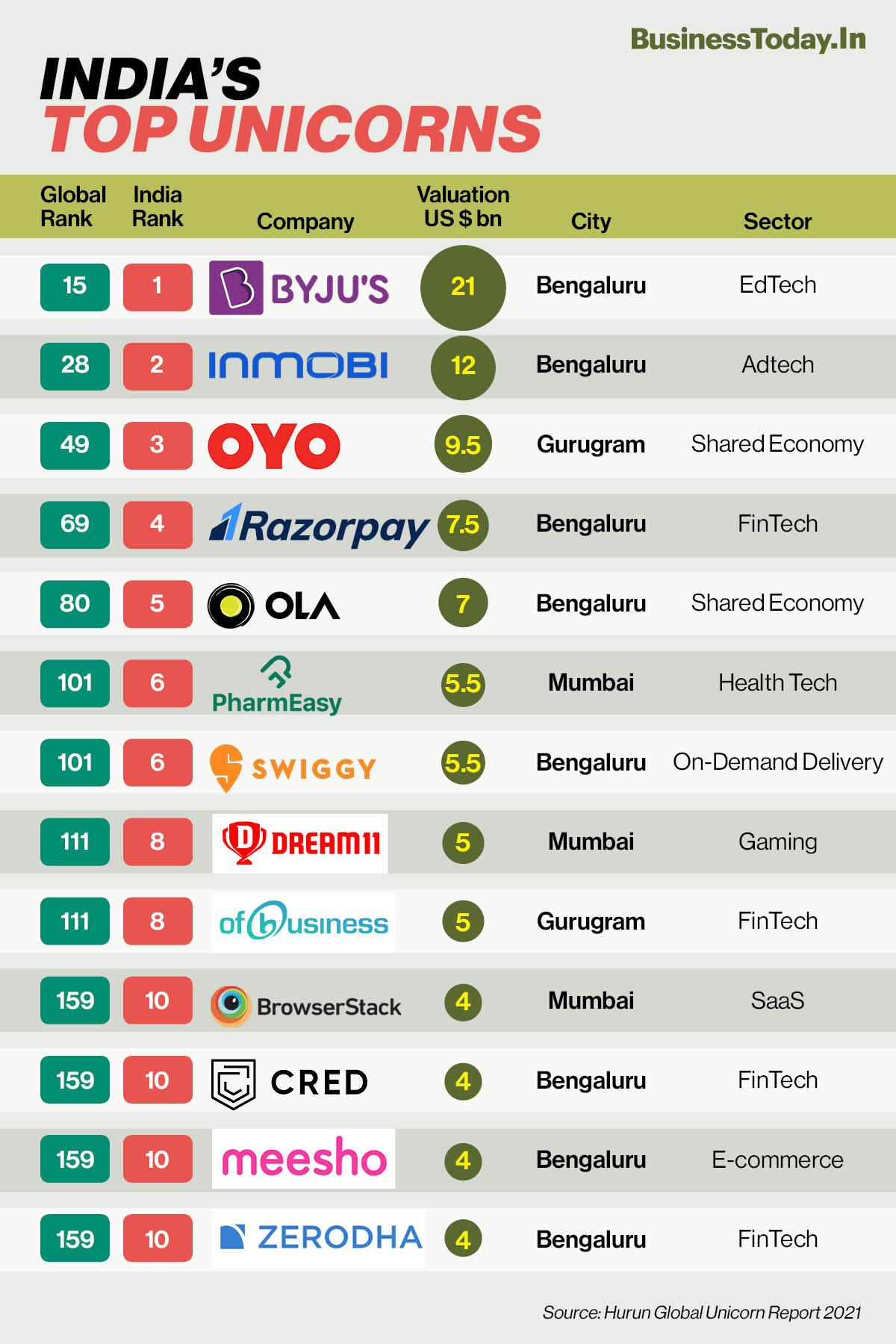 Investments unicorn Mensa Brands, founded in 2021, is the youngest unicorn in the country. It is valued at $1 billion, and is ranked 45th in the country, and 779th in the world.

Fintech, edtech, e-commerce, shared economy are some of the sectors that saw the most unicorns in India.

When it comes to the global rankings, ByteDance tops the list with a valuation of $350 billion, followed by Ant Group with $150 billion, SpaceX with $100 billion, finch Stripe with $95 billion, Klarna with $46 billion, Canva with $40 billion, InstaCart with $39 billion, Databricks with $38 billion, Cainiao with $34 billion and Revolut with $33 billion valuation.

When it comes to unicorn investors, Sequoia is the most successful in the world. It invested in one in five unicorns in the world, stated Hurun. Tiger Fund overtook SoftBank to take the second spot.

Hoogewerf said, “Unicorns are supposed to be hard to find, but investors like Sequoia, Tiger Fund and Softbank make it look easy.”

“A unique feature of China’s start-up ecosystem is the ability of big tech companies to spin off unicorns, with 49 of the world’s 50 ‘spun-off’ unicorns coming from China, such as Ant Group, spun off from Alibaba in 2014. Curiously, the ‘World’s Big 4’ on the Hurun Global 500 most valuable companies, Microsoft, Apple, Amazon and Alphabet, are not as active as their China counterparts when it comes to investing into unicorns,” stated Hoogewerf.