Musk doesn't like information about his private jet's movement going public, and offered $5,000 to a college student to delete a Twitter account which was doing so.

Elon Musk can make electric cars and even travel to space. The founder and CEO of Tesla and SpaceX is also a big supporter of cyptocurrency, with his tweets often resulting in wild fluctuations in their prices. However, there is one thing Musk is scared of -- live updates about his location when he is travelling.

In fact, Musk takes this so seriously that he even offered a 19-year-old college student, Jack Sweeney, $5,000 to delete a Twitter account he had created to track the movement of the Tesla CEO's private jet.

According to a report by portal Protocol, Musk had sent a private message on Twitter to Sweeney, who has created a Twitter bot account '@ElonJet' which tracks Musk's private jet and tweets every time the plane takes off or lands. "Can you take this down? It is a security risk," Musk said in the late night message to Sweeney.

To this, Sweeney replied, "Yes I can but it'll cost you a Model 3 only joking unless?" 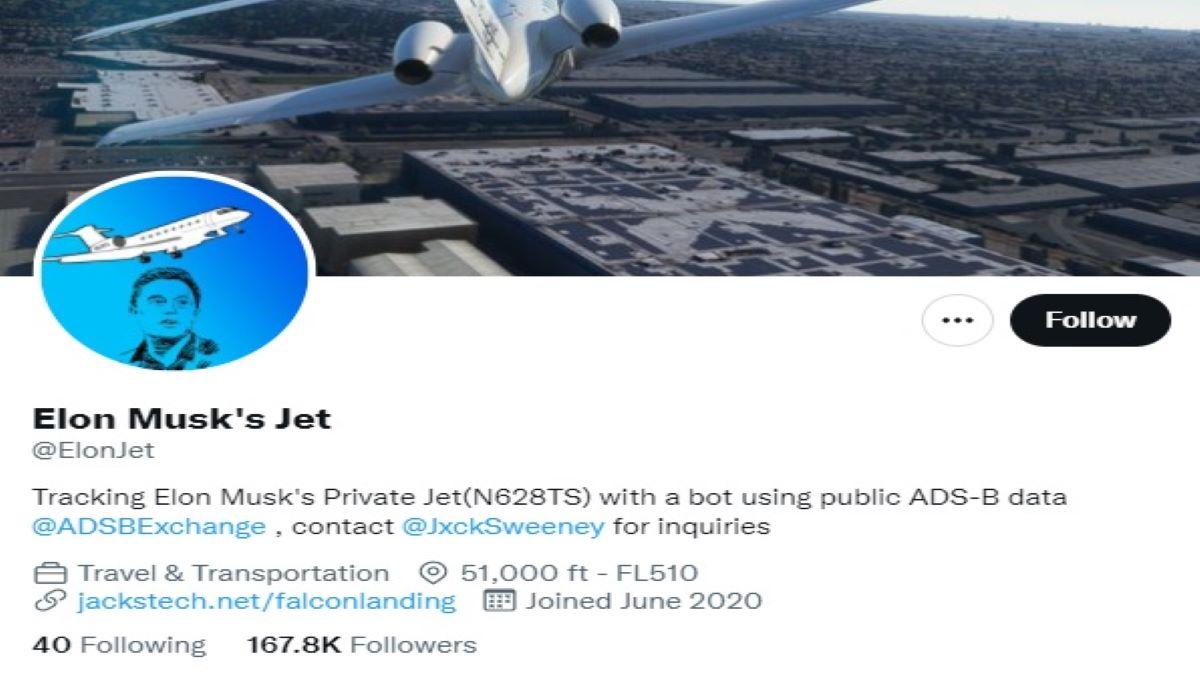 The bot account currently has over 1.67 lakh followers. "I don't love the idea of being shot by a nutcase," Musk had told Sweeney in their conversation, according to the report.

During the conversation, the billionaire asked Sweeney how much he made of the Twitter account and offered him $5,000 to delete the account. "Any chance to up that to $50k? It would be great support in college and would possibly allow me to get a car maybe even a Model 3," Sweeney replied.

Musk said he would think about it but hasn't paid any money to Sweeney.

Who is Jack Sweeney?

Sweeney is a college freshman who has created 15 Twitter bot accounts, including '@ElonJet', which track the private jets of high-profile people, mostly from tech industry, including Bill Gates and Jeff Bezos. He says the accounts have helped him gain followers on social media, learn coding and get a part-time job at UberJets as an application developer, according to the report. Sweeney's personal Twitter handle has over 9,600 followers, including Paytm founder Vijay Shekhar Sharma. His Twitter account says he is interested in space, Tesla and aviation. Along with his interest in planes since childhood, Sweeney's father works in airline industry which helped him program the bot accounts to use the specific information needed to get details about the private jets. In fact, according to the report, he even explained Musk how he obtains all the data about the flights, to which Musk responded by saying, "Air traffic control is so primitive."

During his most recent conversation with Musk, Sweeney says he told the Tesla CEO that he would prefer an internship over payment to delete the Twitter account. However, Musk has not yet opened the message, the report said. "I think he's on vacay in Hawaii if you check ElonJet," said Sweeney explaining the reason behind it.