Google firing: In an email to Google employees, CEO Sundar Pichai said he was deeply sorry for the move and take full responsibility for the decisions that led the company to this position.

Google's move of firing 12,000 employees has shocked the affected staff and techies outside. They are now taking to social media to question the decision by one of the tech titans in Silicon Valley.

In an email to employees, Google CEO Sundar Pichai said he was deeply sorry for the move and take full responsibility for the decisions that led the company to this position.

However, this has not gone down well with some of the tech leaders and affected employees who said if Pichai was responsible for the decisions, then - why should he not step down in the first place?

Vishal Singh, Director Of Engineering at YourDOST, said if he made wrong bets he should pay for it. "Why should Sundar Pichai continue at Google," he asked.

Singh said the board should fire him and the same holds for Satya Nadella at Microsoft, which has also announced that it will sack about 10,000 employees in 2023. "Even politicians are expected to resign after a screw-up," he wrote in a LinkedIn post. 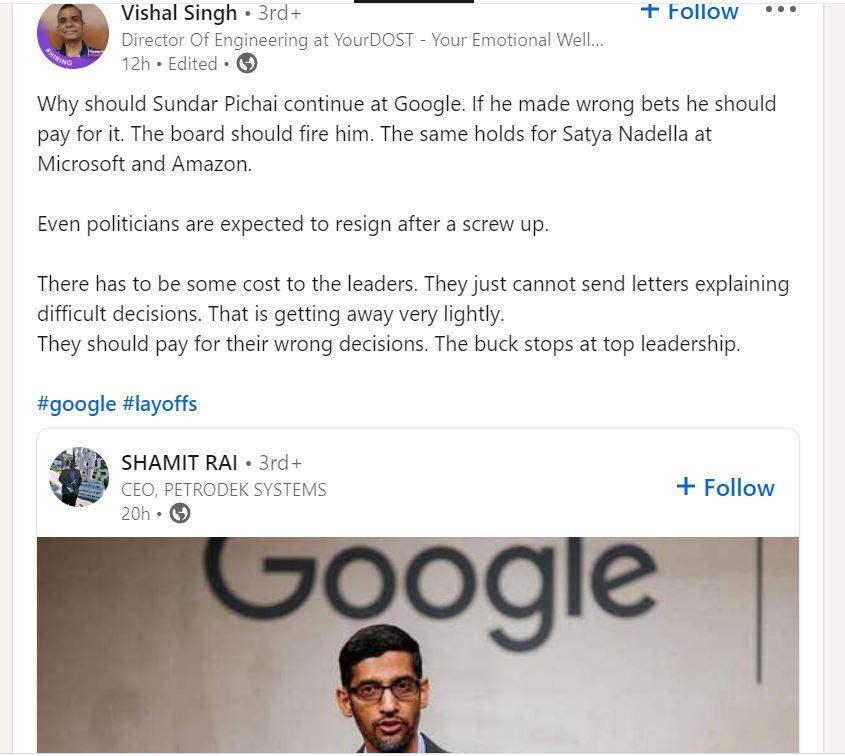 Singh said there has to be some cost to the leaders, they just cannot send letters explaining difficult decisions. "That is getting away very lightly. They should pay for their wrong decisions. The buck stops at top leadership," he added.

On 20 January, Pichai in an email to Googlers said he had some difficult news to share. He said the company had decided to reduce its workforce by 12,000 roles.

"I’m deeply sorry for that. The fact that these changes will impact the lives of Googlers weighs heavily on me, and I take full responsibility for the decisions that led us here," he said.

Shocked at the decision, a user wrote that if Google can do this, then what one can expect from the others?

Pulkit Pahwa, a program manager at Google, said she and other employees would fear that it was coming, but would just brush it off, thinking "Google wouldn't do it, but they did". "Yesterday was a day of disbelief finding out friends and colleagues you worked with for years were laid off," she said.

The Alphabet Workers Union (AWU) has also criticised the company's decision saying that this is unacceptable behavior for a company that made $17 billion in profits last quarter alone. Alphabet is the parent company of Google.

While Alphabet leadership claims "full responsibility," that is little comfort for the 12,000 workers who are now without jobs. This is unacceptable behavior for a company that made $17B in profits last quarter alone.https://t.co/bIsvMjKp6h

The union said that the workers had never been able to rely on Alphabet for secure employment — evidenced by the vast subcontracted workforce — but it was increasingly clear that tech workers must build majorities and force employers to bargain with workers collectively to protect their livelihoods.

"It's appalling that our jobs are first on the chopping block so shareholders can see a few more points in a chart next quarter," the union said.