News
LATEST
How does Mukesh Ambani plan to cut RIL debt to zero in 18 months?

The company will use proceeds from Saudi Aramco, Brookfield and BP Plc deals to pay off debt

Debt is the topic of the season. Even India's richest man Mukesh Ambani-owned Reliance Industries (RIL) is not spared. The petroleum-to-telecom giant witnessed a 438-per cent spike in its gross debt in last one decade. The company is now at an inflection point where it needs to slash liabilities on the books - RIL's gross debt is 3.3 times that of its earnings before interest, tax, depreciation and amortisation (EBITDA) - to make it financially fit to counter eventualities during market slowdown. While addressing shareholders at the annual general meeting (AGM) on Monday, Ambani said that they have "a very clear roadmap" to become "a zero net debt company" by March 2021. 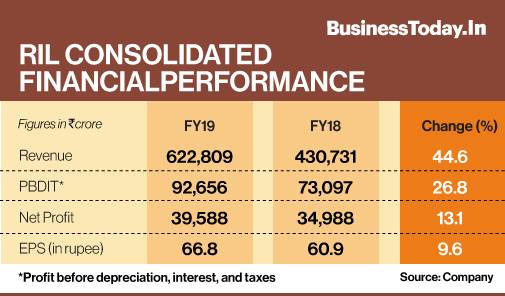 Enter the second deal. RIL has agreed to form a long-term partnership in oil to chemicals (they call it O2C) division. Saudi Aramco is expected to invest Rs 1.1 lakh crore for 20 per cent stake in O2C division  at an enterprise value of $75 billion. "This Partnership will cover all of RIL's refining and petrochemicals assets, including 51 per cent of the petroleum retail joint venture," said Ambani. After this deal, RIL's stake in fuel retailing business will fall below BP Plc's stake in the same. The European oil major took 49 per cent stake in RIL's fuel retail business, recently. Now RIL will hold 40 per cent and Saudi Aramco 10 per cent in the fuel retail segment. They plan to set up 5,500 retail outlets across India.

RIL will also get Rs 7,000 crore from BP Plc against stake sale in retail venture. Saudi Aramco will supply 5 lakh barrels of crude oil every day to RIL's Jamnagar refinery on a long-term basis. RIL processes around 1.8 million barrels of oil a day at its two refineries in Jamnagar. The input from Saudi Aramco will amount 28 per cent of the requirement. Analysts said, "Saudi Aramco will get a dedicated buyer for its crude with the acquisition of 20 per cent stake in RIL. But it is not yet clear whether the deal hamper the price bargaining power of RIL."

Ambani further announced is that RIL has received strong interest from strategic and financial investors in consumer businesses - Jio and Reliance Retail. "We will induct leading global partners in these businesses in the next few quarters," he said. The listing of both the companies has a long waiting period of five years. RIL will get more cash from the new investor in consumer business for reducing the debt further. The market is quiet optimistic that RIL will become a zero debt firm and hold surplus cash on the books, if such a deal happens.

Besides, Ambani is looking to sell some of real estate assets (it might include land that RIL bought for building special economic zones in Mumbai) and exit from some of financial investments. Ambani also mentioned that RIL is "de-emphasising" its Shale Gas business in the US and would only focus on India. It means he may consider selling off the shale gas business and exiting from the production business in the US.

RIL has invested Rs 5.4 lakh crore over the last five years for building and expanding its businesses - it spent Rs 3.5 lakh crore for building the assets of Jio and rest largely for the capacity expansion of petrochemicals business and expanding the network of Reliance Retail. Ambani said that the investment cycle for Jio has been completed. "Only marginal investments in access are now required to grow capacity to meet growing demand," he said. He also said that Jio is ready for 5G business.

However, the unveiling of growth and debt reduction plans failed to cheer investors as RIL's share price rose just 0.87 per cent to Rs 1,162 on Monday. BSE Sensex increased 0.68 per cent to settle at 37,581.91.