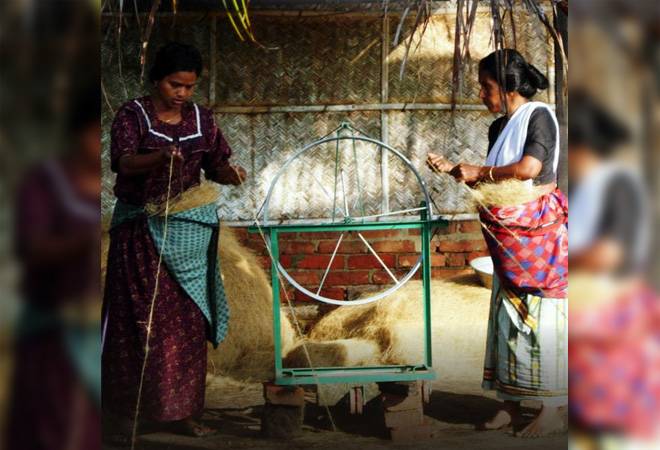 As India prepares to celebrate the National Handloom Day on Friday, a book seeks to honour the handloom weavers and highlight the contribution of this indigenous industry in the socio-economic development of the country.

Kaninika Mishra's book "The Indic Quotient" highlights five significant efforts of individuals and organisations working in the field with weavers to not just assure better value for their product within the country and abroad but also to be part of the movement to preserve and promote Indian traditional art.

The author mentions that handloom fabrics were one of the main items of export from ancient India and hand-weaving still forms the second-largest economic activity after agriculture in India.

The book, published by Bloomsbury India, follows her journey into the heartland of weaving community right from Maheshwar in Madhya Pradesh to Mithila in Bihar that continues to preserve the art form for generations.

The "Indic Quotient" charts out the path right from the weaver to those who facilitate sales and the entrepreneurs who take it to the next level of making use of handloom products a fashion statement.

Mishra's interviews with those in the sector bring out the positive changes as well as the challenges faced.

Mulchand Shravnekar, a fourth-generation weaver in Maheshwar began weaving Maheshwari sarees since childhood, a craft introduced by Ahilyabai Holkar, the 18th-century queen of Malwas. Shravnekar supplying these to wholesales for a pittance is one such real story featured in the book.

Now in his middle age, he owns a few looms and a retail shop in the town.

The book also highlights some key ventures launched that have helped these weavers get a better price for their sarees and cloth material. One such organisation GoCoop won the National Award for outstanding contribution in 'Marketing of Handloom Products (e-Commerce)'.

While charting out these stories, Mishra also highlights how after India gained freedom from the British rule, several measures were introduced to protect handlooms, with legislations that reserved certain items of clothing only for handloom weaving.

Unfortunately, many laws purported to support handlooms were unfairly exploited by the more influential power-loom businesses. It resulted in the loss of image internationally as fake handloom products were marketed and sold in impunity devaluing the authentic handmade textile, the book points out.

The book also discusses the #100sareepact started by friends Ally Matthan and Anju Maudgal Kadam. The movement today has moved beyond the frivolousness of pretty selfies to the stories of the saree itself, its motifs and patterns, with distinct weaves, prints and wearing styles from different regions helping reclaim the sense of cultural identity and womanhood.

There are several other stories including that of cultural entrepreneurs and activists covered in the book. Ihitashri Shandilya runs an artisans' development space called MITHILA Smita that specialises in promoting and preserving Madhubani art form from Mithila Bihar.

While the marketing arm creates sales opportunities, the non-profit arm of MITHILAsmita actively seeks funds from corporations to sponsor welfare benefits for the artists.

The book says that India is home to more than 700 weaving clusters with a unique style. The interest in Khadi, handloom textiles and indigenous art has grown significantly in the last few years, one due to the government's focus on promoting these crafts and secondly there is an increasing awareness of the rich textile traditions of India among designers and consumers.

Mishra also says that social organisations are playing a very significant role in uplifting this sector through artisan welfare and designers committed to preserving and promoting a particular handloom variety.