These bat coronaviruses have no relation with SARS-CoV2 responsible for the COVID-19 pandemic, said Dr Pragya D Yadav, Scientist at the National Institute of Virology, Pune and also the first author of study 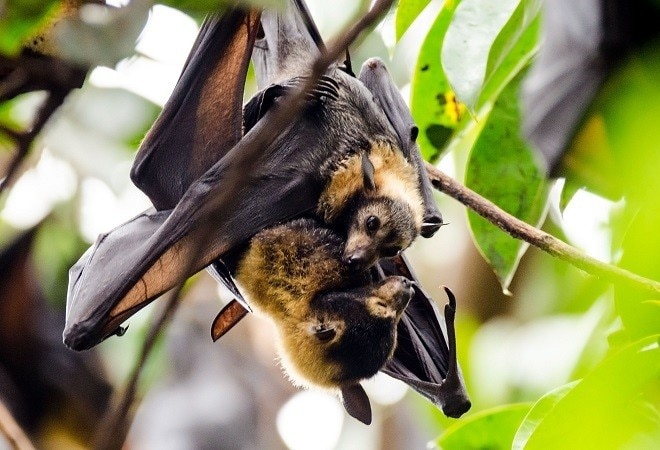 Researchers have discovered a kind of coronavirus in two bat species found in Kerala, Himachal Pradesh, Puducherry and Tamil Nadu, a study by Indian Council of Medical Research (ICMR) showed. This strain of coronavirus - bat coronavirus or BtCoV - is different from the kind found in humans and can cause no harm to us.

Twenty-five bats of Rousettus and Pteropus species from Kerala, Himachal Pradesh, Puducherry and Tamil Nadu were found positive for BtCoV. Notably, Pteropus bat species were found responsible for for Nipah virus outbreak in Kerala back in 2018 and 2019.

"These bat coronaviruses have no relation with SARS-CoV2 responsible for the COVID-19 pandemic," said Dr Pragya D Yadav, Scientist at the National Institute of Virology (NIV), Pune and also the first author of study.

Elaborating on the study, Dr Yadav said throat and rectal swab samples of two bat species -- Rousettus and Pteropus -- from seven states were screened for the bat coronvirus. The representative samples collected from Kerala, Himachal Pradesh, Puducherry and Tamil Nadu tested positive while those from Karnataka, Chandigarh, Punjab, Telengana, Gujarat and Odisha came out negative, she further added.

The reverse-transcription polymerase chain reaction (RT-PCR) tests and sequencing were used for the confirmation of the findings. "This is an ongoing study to understand the prevalence of the Nipah virus in bats," Dr Yadav said.

Published in Indian Journal of Medical Research, objective of the study titled 'Detection of coronaviruses in Pteropus and Rousettus species of bats from different states of India' stated that bats are considered natural carriers of many viruses, some of which can become human pathogens. Bats are known reservoirs for Rabies, Hendra, Marburg, Nipah, Ebola and even some forms of coronavirus.

"In India, an association of Pteropus medius bats with the Nipah virus was reported in the past. It is suspected that the recently emerged severe acute respiratory syndrome coronavirus 2 (SARS-CoV-2) also has its association with bats," the study stated.

"Although CoVs in the subfamily coronavirinae do not usually produce clinical symptoms in their natural hosts (bats), accidental transmission of these viruses to humans and other animals may result in respiratory, enteric, hepatic or neurologic diseases of variable severity. It is still not understood as to why only certain CoVs can infect people," the study further said.

The detection and identification of such viruses from bats also recommends cross-sectional antibody surveys (human and domestic animals) in localities where the viruses have been detected.

Similarly, if the epidemiological situation demands, evidence-based surveillance should also be conducted, the study said while emphasing on the need of developing strong mechanisms for working jointly with various stakeholders such as wildlife, poultry, animal husbandry and human health departments.

The coronavirus contagion has been traced to bats. Reports suggest that eating flesh from an infected bat gave rise to the virus in China. In India, some regions in Western Ghats, especially in Kerala are home to diverse bat populations.

Coronavirus impact: Companies come together to hire talent getting laid off