As authorities sound alarm over the fresh surge in the cases, AIIMS director Randeep Guleria said the "main reason" is that people feel the pandemic is over and they are not following COVID appropriate behaviour 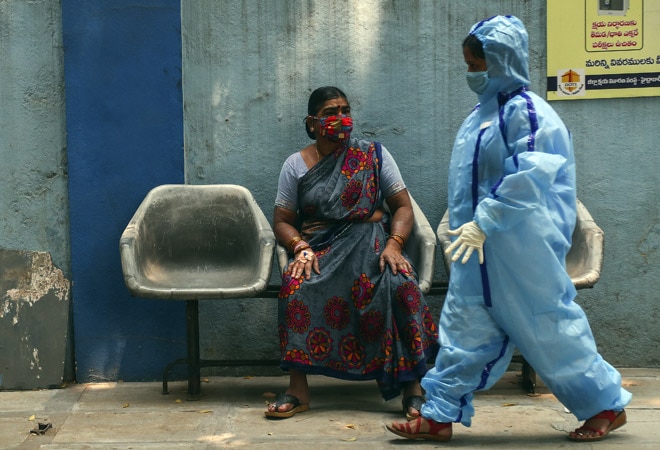 Eight states including Maharashtra and Delhi are reporting a rising trajectory of new COVID-19 cases as India recorded one lakh infections in just three days including the latest spike of over 40,000 cases in the biggest daily increase in nearly four months.

The Union Health ministry while giving the latest COVID-19 update on Saturday said that on the other hand, Kerala is showing a "consistently declining" trend.

The worst-hit state of Maharashtra recorded the highest number of new cases -- 27,126 -- since the outbreak of the pandemic early last year while Delhi reported over 800 cases for the first time this year as the positivity rate breached the 1 per cent-mark after over two months. The latest data was released on Saturday by the respective health departments.

As authorities sound alarm over the fresh surge in the cases, AIIMS director Randeep Guleria said the "main reason" is that people feel the pandemic is over and they are not following COVID appropriate behaviour.

"There are multiple reasons for the surge, but the main reason is that there is change in people's attitude and they feel coronavirus is over. People should still restrict non-essential travel for some more time," he said at an event organised here by the Indian Police Service(Central) Association.

NITI Aayog member (Health) V K Paul said the chain of transmission has to be stopped and for that vaccine is one tool but another is containment and surveillance strategy.

"Not following COVID-19 behaviour and laxity is a major reason for the surge," he said speaking at the same event.

"A rising trajectory of daily new cases is visible in eight states. These are Maharashtra, Tamil Nadu, Punjab, Madhya Pradesh, Delhi, Gujarat, Karnataka and Haryana. Kerala is showing a consistently declining trend," the ministry said in a statement.

With this, India has registered over one lakh cases in just three days. On Friday, 39,726 new cases were logged while 35,871 fresh cases were recorded the previous day.

Registering an increase for the tenth day in a row, the total active caseload has reached 2,88,394 accounting for 2.49 per cent of the total infections, while the recovery rate has further dropped to 96.12 per cent, the Health ministry data showed.

The COVID death toll increased to 1,59,558 with 188 new fatalities, the ministry said, adding that more than 70 per cent of the deaths occurred due to comorbidities.

The 188 new fatalities include 70 deaths from Maharashtra, 38 from Punjab and 17 from Kerala.

The number of people who have recuperated from the disease surged to 1,11,07,332, while the case fatality rate stood at 1.38 per cent, the official data showed.

Amid a spurt in coronavirus cases in Mumbai, the Brihanmumbai Municipal Corporation(BMC) has decided to carry out over 47,000 rapid antigen tests at public places every day.

The tests will be mandatory for those selected, and those who refuse will have to face action under the Epidemic Act, 1897, the circular stated.

"It is a bitter pill we have to swallow now to check the rising number of COVID-19 cases in the city. We appeal to citizens to comply and help carry out the rapid antigen tests," a civic official said.

As per the circular, BMC officials have been given the target of carrying out 47,800 tests daily at places such as railway stations, bus depots, food joints, markets, tourist spots and government offices.

People will be chosen randomly for testing.

Even if a person has already undergone testing, the civic body will insist on retesting, as detection of the infection is more important, the BMC official said.

Responding to a question on vaccinating more people, Paul said the issue is vaccines are limited and that is why, prioritisation has been done.

"If we had unlimited supply, we would open the vaccination for everyone. That is the reason, not everyone, is getting vaccinated. Most countries in the world are not able to go beyond priority group because of this reason," he added.

Paul also said the highest mortality was seen among people with co-morbidities and older age groups.

"These people must not delay taking the vaccine. So the message is that they need it more than others. That is the reason they have been prioritised for getting the COVID-19 vaccine."

Over four crore people in the country have been vaccinated against the disease till now. Under the current phase of the inoculation drive, people above 60 years of age and those in the 45-59 years age bracket with co-morbidities, are being vaccinated.

In a bid to contain the spread of coronavirus in Ahmedabad, one of the cities in Gujarat where the cases are rising, the civic body said it has decided to once again launch its drive to screen the virus 'super-spreaders'.

'Super-spreaders' are those people, who are likely to spread the infection to a large number of people.

People such as vegetable vendors, medicine store owners, grocers, auto-rickshaw drivers, saloon owners, and masons will have to obtain identity cards after getting themselves tested for the virus across 18 urban health centres in the city, Ahmedabad Municipal Corporation (AMC) said.

They will be screened through rapid antigen tests and issued COVID-19 negative identity cards, the civic body said in a release.

Apart from them, food delivery boys and those working in supermarkets will have to get their RT-PCR test done.

With Tamil Nadu witnessing a sudden surge in coronavirus cases over the last few days, the state government ordered the closure of schools for classes 9, 10 and 11 from March 22 until further orders.

However, they would continue to function for the 12th standard students for they have to take the board examinations.

Tokyo Olympics: International spectators to be barred from entering Japan, 9 lakh tickets to be refunded