The violence that occurred on January 26 and the Red Fort incident was a conspiracy to break the farmers' movement and the government has succeeded in doing that, explained Tikait 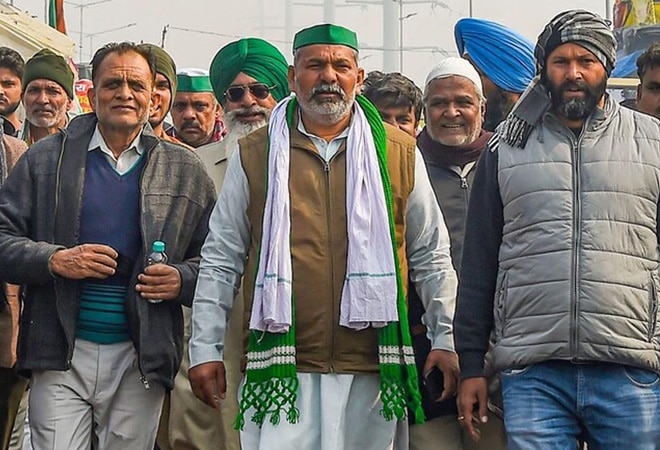 Violence which took place on Republic Day in New Delhi was a "conspiracy to malign the farmer unions and distance Punjab from the rest of the country," said Bhartiya Kisan Union (BKU) spokesperson Rakesh Tikait on Thursday. Tikait is among the 37 farmer leaders who have been named by the police in the FIR in January 26 Delhi violence case.

"The violence that occurred on January 26 and the Red Fort incident was a conspiracy to break the farmers' movement and the government has succeeded in doing that," explained Tikait.

Tikait has also accused the Delhi Police of displaying negligence at Red Fort on January 26, when protesters had stormed the building and hoisted flags. "Someone goes there and hoists a flag, why no firing was done?" Tikait asked the police.

Tikait also accused the police of allowing Deep Sidhu to leave without arresting him. Tikait said, "Police allowed him to leave and didn't arrest him. Nothing has been done even now." Actor-turned-activist Deep Sidhu has been accused by the farmer unions of instigating the violence which took place on January 26.

Delhi Police had issued a notice to Tikait asking why legal action should not be taken against him for breaching the arrangement between them and the farmer unions for the Republic Day tractor rally.

The notice also reads, "You are also directed to provide names of the perpetrators of such violent acts belonging to your organisation. You are directed to submit your response within 3 days."

Delhi Police has named 37 farmer leaders, including Rakesh Tikait, Yogendra Yadav and Medha Patkar, in an FIR in the January 26 violence case. The Delhi Police FIR has mentioned charges of attempt to murder, rioting and criminal conspiracy.