Cocoberry's frozen yogurt comes in fruit flavors like strawberry and blackberry. They also offer fresh berry toppings. Photos: Saptarshi Biswas
Dearton Thomas Hector
Are you a fan of blackberries (The fruit, not the ever-blinking device that many people carry in their pockets)? Well, so are CEOs of companies in the emerging high-end frozen yogurt market - constantly on the lookout for exotic flavours, to introduce in the Indian market.

The frozen-yogurt market will have a new entrant by the end of this year - Yogurberry, the South Korean yogurt major. The low-fat yogurt brand is planning to open more than 100 outlets across cities in India over the next 5 years. Yogurberry, established in 2004 in Korea, already has presence in 16 other countries, including the United States, China, Brazil, Portugal and Malaysia.

The rise of premium yogurt outlets in the country began with G S Bhalla's entrepreneurial venture Cocoberry. Started as the country's first frozen-yogurt chain in two cities in February 2009, it has grown to 7 cities with 32 outlets.

The frozen-yogurt market will have a new entrant by the end of this year - Yogurberry, the South Korean yogurt major.
"It is always good to have more players entering the market. Our goal is to be one among the top 3 players in the world", says G S Bhalla, managing director of Cocoberry, who first became interested in starting his own venture when he was 7 years old.

Kiwi Kiss, the Canadian yogurt chain, made its foray into India last year, opening stores in Bangalore and Chennai. The rise of premium yogurt outlets in the country began with G S Bhalla's entrepreneurial venture Cocoberry
The makers of frozen yogurt claim that these sweet treats are sin-free because frozen yogurt is a healthy dessert option. Cocoberry's frozen yogurt comes in fruit flavors like strawberry and blackberry. They also offer fresh berry toppings, which are rich in anti oxidants, and the yogurt itself contains probiotics.

"Yogurt is one of the safest foods because of its acidic nature. It is scientifically proven that probiotic bacteria like Lactobacillus, which are present in yogurt, help prevent Travellers' Diarrhoea and it is beneficial to have yogurt after completing a course of antibiotic medication, if you are going through one", says Dr. B Sesikeran, director, National Institute of Nutrition, Hyderabad. 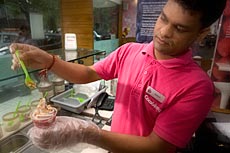 Cocoberry's frozen yogurt comes in fruit flavors like strawberry and blackberry.
Marketing frozen yogurt as a healthy option is a smart move. According to a study conducted by the Tata Strategic Management Group, the size of the Indian health and wellness food market will rise to Rs 550 billion by 2015, from an estimated Rs 101 billion in 2010 - a growth of 35-37 per cent.

But the success of these chains depends upon factors like location, menu, and toppings on offer.

"We are planning to tweak our menu, based on Indian tastes. Although the basic concept and most of the menu items would remain the same, it would include yogurt flavors and smoothies based on local taste and toppings, which we feel would be more popular for Indian markets," says Pawan Batavia of the Dubai-based Synergy group, which is the master franchisee of Yogurberry for India. Cocoberry started as India's first frozen-yogurt chain, in two cities in February 2009 and has grown to 7 cities with 32 outlets.
They have signed a memorandum of understanding with Raasha Leisure and Entertainment as the area franchisee for Yogurberry in the North East.

"Our strategy for expansion is based on appointing area franchisees based on territories. The Indian market is very large and attractive but at the same time very diverse in terms of geography, languages, taste palate and purchasing power. We are selecting companies who are strong in the local territories and who have better knowledge of the area to manage the outlets," he said. 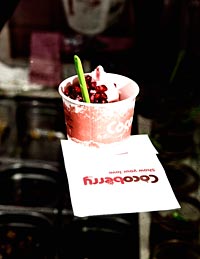 Cocoberry also offer fresh berry toppings, which are rich in anti oxidants, and the yogurt itself contains probiotics.
When entering a franchise model, the level of comfort with the partner is critical for the brand's success.

"Franchising makes it easier to get capital and Human Resources, and the speed of expansion is also much better in this model, than opening up company outlets", says Gaurav Marya, President of Franchise India, which helped Yogurberry form its alliance with Rashaa.
The competition is going to be tough for all these players as they are targeting the same type of customers. "When a new brand enters the market, competition is obvious. Eventually, it will come down to who is located where. Different areas will evoke different responses. It would be sensible for Yogurberry not to keep prices too high," says Sonia Mohindra, of Under One Roof Hotel Consultants.

At present, Yogurberry is planning to have a price range of Rs 65 to Rs 250, while Cocoberry has a range starting from Rs 58 to Rs 266. Meanwhile, premium ice cream chains like Giani's offer plain vanilla at Rs 35. Maybe the cliche is worth remembering - "You gain some, you lose some".

But, it seems that the coming months are going to be exciting for the companies as well as the young breed of health conscious fro-yo fans, as the world of colours and flavours beckons like never before.