Jaipur Literature Festival 2013: Of the economy, religion and a missing author

The new wunderkind among business writers, Ruchir Sharma, whose book "Breakout Nations: In Pursuit of the Next Economic Miracles" is a global bestseller, engaged in a public 'conversation' with the equally formidable Nandan Nilekani, chief of the Unique Identification Authority project, on the second day of the festival.

Ruchir Sharma (left) and Nandan Nilekani, on Day 2 of the festival (Photo: Ramesh Sharma/Mail Today)
No great expectations
The new wunderkind among business writers, Ruchir Sharma, whose book "Breakout Nations: In Pursuit of the Next Economic Miracles" is a global bestseller, engaged in a public 'conversation' with the equally formidable Nandan Nilekani, chief of the Unique Identification Authority project, on the second day of the festival. It proved more of an interview than a conversation, with Nilekani, whose own book "Imagining India: The Idea of a Renewed Nation" had topped bestseller lists in India, content to play second fiddle, merely asking questions and allowing Sharma to hold forth. Sharma did not disappoint, making a series of contrarian assertions. The weakening of the rupee, he said, was a good thing, as it was now "at a more realistic level, which will enable per capita income to rise faster". And the currently bleak economic scenario? "Things have improved because expectations are down and the unrealistic dreams of eight to nine per cent annual growth have gone out of the window," he added.

Getting federal
So, will India be one of the next economic miracles? Sharma said the chances were "fifty-fifty". The most encouraging development, he maintained, was the growth of strong, successful leadership at the state level. "Currently, there are six chief ministers who have won three consecutive terms," he said. "Two decades ago, there was only one - Jyoti Basu in West Bengal." (The six are Narendra Modi in Gujarat, Sheila Dixit in Delhi, Shivraj Singh Chouhan in Madhya Pradesh, Raman Singh in Chhattisgarh, Naveen Patnaik in Orissa and Tarun Gogoi in Assam.) "The old, centralised, Delhi-controlled model of development is going and that augurs well," he added. 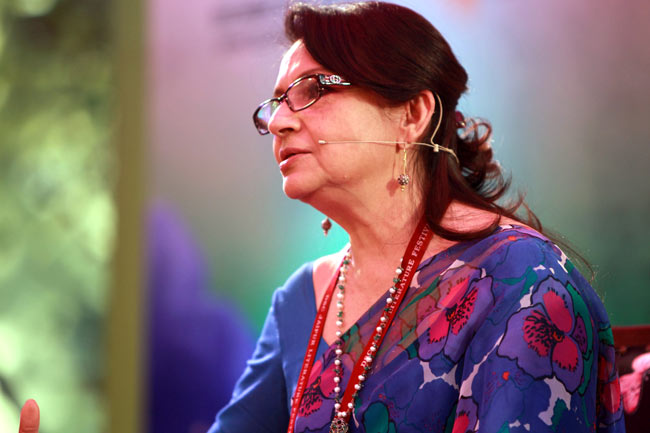 Sharmila Tagore on the Day 1 of the Jaipur Literature Festival (Photo: Aditya Kapoor)
Reel substance
The whiff of Bollywood grew stronger on the second day, with Sharmila Tagore, Javed Akhtar and Shabana Azmi all taking the stage. Tagore had participated in a session on the first day, too - a discussion on the work of renowned Bengali writer Sunil Gangopadhyaya, who passed away in October last year. On Friday, she starred in two sessions. The first was one entirely on herself: 'An Evening with Sharmila Tagore'. The second was entitled the 'The other Tagore' and featured the poet Rabindranath, her great-great-great uncle. Azmi released a book, while Akhtar expounded on the ghazal and the decline of Hindi cinema. "Name one good film that has earned Rs 200 crore," he asked rhetorically. "There are good films being made but the dominant aesthetic is getting poorer and poorer." 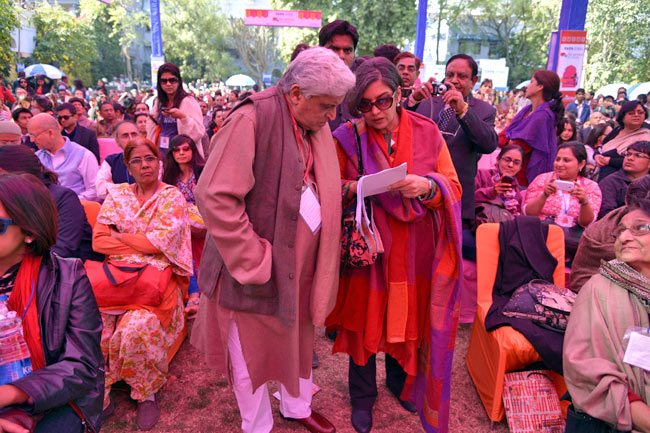 Javed Akhtar and Shabana Azmi on the Day 1 of the Jaipur Literature Festival (Photo: Aditya Kapoor)

Of slaves and masters
Unexpected sparks flew at a discussion about Dalit perspectives on Buddhism, with rising young Dalit writer Ajay Navaria flatly contradicting fellow writer and activist Kancha Ilaiah on whether Buddhism was really a panacea for Dalits. Ilaiah, known for his trenchant attacks on Hindu practices, particularly the caste system, was left speechless as Navaria maintained that the Buddha did not allow "slaves and dependent women" into the Buddhist fold unless they had "the permission of their masters". From the audience, Javed Akhtar added fuel to the fire, saying he was against all religions as none of them provided equality "to women and weaker sections". Moderator Patrick French hurriedly wound up the discussion.

Playing safe
Given last year's controversy, Salman Rushdie's absence from the festival evoked a good deal of comment this year too, more so because he is currently very much in India, promoting the recent film on his classic work, "Midnight's Children". He had been invited last year and had enthusiastically accepted, but was persuaded to stay away after obscure Islamic outfits opposed his presence. This year, he was not invited, and the organisers have been embarrassedly sidestepping questions on why not.

New leaf
Meanwhile the last threat to the peaceful conduct of this year's festival has been withdrawn. The Muslim outfits that opposed Rushdie's visit last time had warned they would prevent writers who held public readings of his banned book, "The Satanic Verses", from attending this year's event. But they have had second thoughts. "We have no objection now as we have been informed by the police commissioner that those authors had apologised for reading from the banned book," said the general secretary of one of the groups, in a public statement.