Prime Minister Narendra Modi's public rallies reflect a considerable shift in his choice of words when compared to the 2014 Lok Sabha polls with the word 'chowkidar' dominating his speeches this time. As per India Today's Data Intelligence Unit (DIU), which analysed PM Modi's five pre-poll speeches in Patna, Varanasi, Delhi, Chennai and Meerut, to his 2019 election rallies, the focus of his speeches seems to have shifted towards words like 'chowkidar' from 'poor'. The DIU analysed his 2014 speeches with 2019 Lok Sabha election rallies in Bhagalpur, Kendrapara, Moradabad, Panaji, and Buniadpur.

The analysis reveals that Modi used the word 'chowkidar' more often, and the word appeared 106 times in his 2019 election rallies. Five years ago, the word 'poor' dominated his public speeches, with a total of 55 mentions. While the word 'poor' still remains the second most used word with 41 mentions in 2019, 'Congress' was the word that appeared most frequently after 'poor' in his 2014 rallies. In 2019 'Modi' was the third most used word, while 'BJP' was used more frequently after 'poor' and 'Congress' in 2014. Other words that appeared prominently in his 2014 speeches were Gujarat (28), farmers (28) and development (25). This time too, his choice of words revolves around Congress (36), farmers (23) and BJP (24). 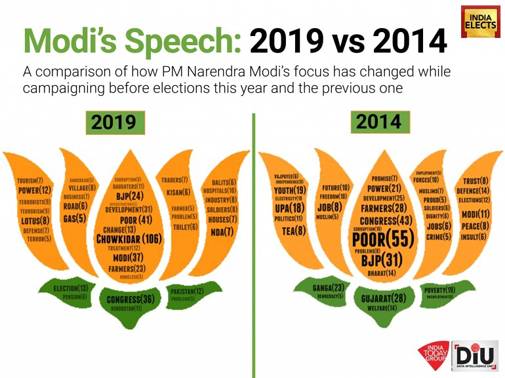 The word 'chowkidar', initially used by PM Modi to counter the Congress party over dynasty politics, gained momentum after Congress chief Rahul Gandhi used it to launch an alleged corruption campaign against PM Modi involving the Rafale deal, saying 'chowkidar chor hai' (watchman is a thief). The BJP, right before the commencement of the 2019 Lok Sabha polls, tried to turn it into a political advantage by adding the moniker 'chowkidar' before their names on social media, which led to a wave of BJP supporters adding the 'chowkidar' as a prefix to their names on social media. PM Modi, during his recent interview with Aaj Tak, also said he used the moniker 'chowkidar' to counter Congress' mockery of his backward background. A close look at PM Modi's speeches (before and after polls) reveals there has been a significant fall in his choice of words related to public issues like 'poor', 'job', 'corruption' and 'poverty'. Comparing it with his 2014 rallies, he used 'poverty' 25 times in 2014 but three times in his 2019 speeches. Interestingly, the Congress' prime focus this time has moved towards 'poverty' alleviation through its 'Nyuntam Aay Yojana (NYAY) scheme.

Modi's 2014 rallies had minimal usage of words like 'Pakistan' and 'terrorism', but after the air strikes in Pakistan these words were used most frequently by all BJP leaders, including PM Modi himself. Despite the Election Commission (EC) guidelines on not using armed forces to gain political mileage, BJP leaders have time and again lauded PM's strong leadership for avenging the deaths of CRPF jawans in the Pulwama suicide terrorist attack in February.

'Burning files is not going to save you,' Rahul Gandhi takes a dig at PM Modi