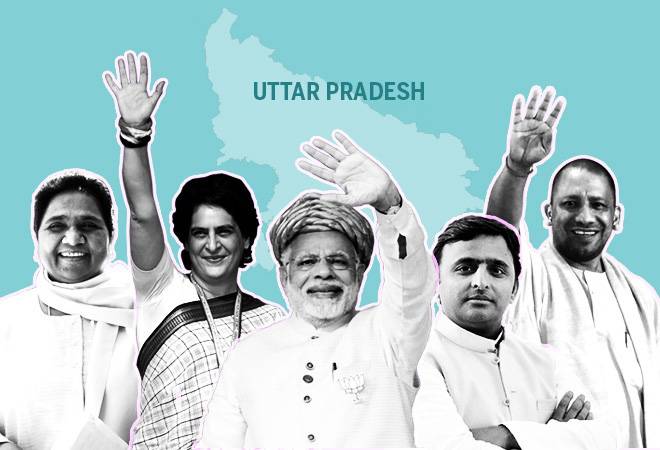 The BJP and its ally Apna Dal(S) has consolidated its position in Uttar Pradesh by bagging four seats and leading in 59 others, according to the available trends. Prime Minister Narendra Modi won from Varanasi by defeating his nearest rival SP's Shalini Yadav by a huge margin of 4,79,505 votes. According to the trends available till 7 pm, the BJP wrested Bahraich and Gorakhpur seats, while Apna Dal (S) won from Robertsganj. The fifth seat went to the BSP. The party had drawn a blank in the state during the 2014 Lok Sabha polls. Gorakhpur seat was wrested by Bhojpuri star and BJP candidate Ravi Kishan by defeating SP's Rambhual Nishad by a margin of 3,01,664 votes. As Union minister Smriti Irani has also won from Amethi. She quoted a line from a famous poem to assert that nothing was impossible. Chief Minister Yogi Adityanath attributed the impressive show by his party to the "alert voters" who he said rejected the 'mahagathbandhan' (grand alliance) of opposition parties.

As the mammoth saga comes to an end, here are the latest updates on the Lok Sabha Elections 2019 Results in UP:

9.56 PM: The latest tally as per the Election Commission.

9.42 PM: As per the EC, UPA Chairperson Sonia Gandhi has been polled 5.34 lakh votes. Dinesh Pratap Singh of the BJP got 3.67 lakh votes.

9.40 PM: Smriti Irani offers prayers at a temple in Amethi.

BJP candidate from Gorakhpur, Ravi Kishan, wins by 3,01,664 votes. Says, "This is a victory of the truth." #ElectionResults2019pic.twitter.com/IiwZY8fSD2

6.32 PM: The BJP ahead on 60 seats in Uttar Pradesh; SP-BSP alliance at a second second.

5.51 PM: Congress President Rahul Gandhi: "I had said that during the campaign 'janta maalik hai' and today people have clearly given their decision. I congratulate the PM and BJP."

Congress President Rahul Gandhi: I had said that during the campaign 'janta maalik hai' and today people have clearly given their decision. I congratulate the PM and BJP. #ElectionResults2019pic.twitter.com/vO5HBkoorb

5.09 PM: "Aspirational India has proved it once again that India wants growth and a leadership that believes in country first & acts tirelessly for the people. Let us work together & make lives of every countrymen better. Jai Hind," Finance Minister Arun Jaitley.

UP Chief Minister Yogi Adityanath: I want to congratulate Prime Minister Modi for this victory. BJP is touching 300 mark for the first time & NDA is touching 350. I also congratulate the party President Amit Shah. #LokSabhaElectionresults2019pic.twitter.com/0JxtURwjLL

Take a look at the Partywise Trends and Results for the following states.

For more Live updates on #ElectionResults2019, stay connected to our Twitter handle.#UttarPradesh#Haryana#MadhyaPradesh#Keralapic.twitter.com/3WBR8Yx008

I extend warmest congratulations to Prime Minister @narendramodi ji for landslide election victory in the Lok Sabha Elections 2019. I wish all success ahead. I look forward to working closely with you. #PMOIndia

Here is looking at the 11 States that recorded historic Voter Turnout in #LokSabhaElections2019@CEOBihar@CEOGujarat@ceo_karnataka@CEOChhattisgarh@CEOAndhra@CMMadhyaPradesh@hpelection@ceo_assam@CeoRajasthan@ceojharkhand@ceouppic.twitter.com/9m5WZw5Em1

1.24 PM: The initial trends appear to be mixed for the Yadav clan of the Samajwadi Party, with party supremo Akhilesh Yadav's cousins trailing from Firozabad and Badaun seats. In Azamgarh, Akhilesh Yadav is leading by 45,023 votes against Bhojpuri actor and BJP candidate Dinesh Lal Yadav 'Nirhua', according to the Election Commission website. The SP chief's wife, Dimple Yadav, is leading by 5,420 votes over the BJP's Subrat Pathak in Kannauj. --PTI

12.24 PM: SP patriarch Mulayam Singh is leading from Mainpuri. His son and SP chief Akhilesh Yadav and daughter-in-law Dimple Yadav are ahead from Azamgarh and Kannauj.

#BJP leads in 55 #LokSabha seats against #Mahagathbandhan 's 23 in #UttarPradesh.#Dangal2019#ElectionResults2019#LokSabhaElections2019pic.twitter.com/UmPivF9myi

In Varanasi after round 5, Narendra Modi leading over Shalini Yadav by margin of 92,999 votes.#ElectionResults2019 | #ResultsWithAIRpic.twitter.com/4YTnh1lI12

Union Minister #ManekaGandhi was trailing in #Sultanpur where the #SPBSP candidate #SonuSingh is leading. Another Union Minister, #ManojSinha, was trailing behind #BSP's #AfzalAnsari in #Ghazipur.#LokSabhaElections2019#Dangal2019

10.42 AM: Rajnath Singh leading by more than 50 thousand votes in Lucknow; Hema Malini ahead in Mathura.

10.13 AM: Early election trends show that UP Congress chief Raj Babbar is trailing from Fatehpur Sikri.