Delhi CM Arvind Kejriwal assaulted by a man during his roadshow in Moti Nagar, Delhi.

After PM Narendra Modi and BJP chief Amit Shah took on Rahul Gandhi over reports that his former business partner got defence offset contracts during UPA. Jaitley said Rahul did not have any business raising his finger at the BJP (presumably over the Rafale deal) when he himself has been involved in corruption.

Cyclone Fani has thrown a lot of poll campaigns of political parties in the run-up to Lok Sabha Election 2019 out of gear especially in the eastern states. While PM Modi's public meetings took a hit in Tamlik and Jhargram in West Bengal which were scheduled on May 5 but have been scheduled to be held on May 6, Shah's rallies in Ghatal and Bishnupur (West Bengal) on May 6 have been pushed back to May 7.

West Bengal Chief Minister and Trinamool Congress Chief Mamata Banerjee also announced Friday that her party has cancelled all its poll campaigns and political programmes for the next 48 hours.

Where PM Modi will canvass for BJP in Uttar Pradesh's (UP) Pratapgarh and Basti followed by a public rally in Ramnagar in Bihar's West Champaran district, Shah will campaign in Madhya Pradesh's (MP) Rewa, he will also, hold a roadshow in UP's Amethi and address a public meeting in Rohini, Delhi. Congress chief Rahul Gandhi will canvass for his party in Harayana's Gurugram and UP's Dhammor. Delhi Chief Minister and Aam Aadmi Party leader Arvind Kejriwal will hold a roadshow in South Delhi where he will campaign for AAP candidate Raghav Chadha.

Here is the timeline for Lok Sabha election 2019:

7: 30 pm: Union Minister VK Singh hits out at Congress party over its claim of having carried out 6 surgical strikes when the UPA government was in power.

The BJP candidate from Ghaziabad and the current member of Parliament from the district in a tweet questioned the claim of  Congress that surgical strikes had been conducted between 2008 and 2014.

Congress has a habit of lying. Will you please let me know which 'So called Surgical Strike' are you attributing to my tenure as COAS. Am sure you must have hired some Coupta to invent another story .

7:10 pm Election Commission gives a clean chit to Prime Minister Narendra Modi on his Patan speech in which he claimed that his government had kept Pakistan on toes for safe release of IAF pilot Abhinandan Varthaman. The commission concluded that Modi has not violated the model code or its advisory on armed forces in his speech in Gujarat's Patan city on April 21. This is the sixth speech of the prime minister which has been cleared by the EC.

6: 45 pm: BJP chief Amit Shah accuses the Congress-led Madhya Pradesh government of "repressing" his party workers and claimed that legs of Chief Minister Kamal Nath's chair will shake after Lok Sabha results are declared on May 23. Addressing a rally in Govindgarh in Rewa, Shah claimed that BJP workers involved in poll campaigning were being externed from districts by state authorities, and two of them were killed and some slapped with murder charges.

6: 20 pm: Deputy Chief Minister of Uttar Pradesh Dinesh Sharma says winning Lucknow Lok Sabha seat, which the BJP has held since 1991, will be a "cakewalk" for Union minister Rajnath Singh, even as SP's Poonam Sinha seeks to give a tough fight to the saffron party.

6: 10 pm: Man taken into police custody. DCP (West) Monika Bhardwaj said the man has been identified as Suresh, 33, and he deals in spare parts in Kailash Park.

6: 00 pm: Delhi CM Arvind Kejriwal assaulted by a man during his roadshow in Moti Nagar, Delhi. Kejriwal was atop an open jeep when a man wearing a red t-shirt jumped onto the vehicle and slapped the chief minister.

5:45 pm: Chidambaram said, "Who got Hafiz Saeed named as a global terrorist? Have you forgotten Lakhvi? Two people were named as global terrorists when Congress was in power, Masood Azhar is not the first person."

Chidambaram asked, "We started the process in 2009 to name Masood Azhar as global terrorist, 10 years later process is complete. Mr Modi is only talking about last scene of the story, it's like going to a movie and only looking at the last scene, what about the earlier scenes?"

Modi in Valmiki Nagar, Bihar says Nitish Ji removed 'Lalten' (RJD's symbol) with hard work and provided electricity to every household. They are trying to push you back in the 'lalten' era but Nitish ji and his team is working to illuminate every household with the light of LED bulbs.

4:45 pm: Jaitley said that Rahul did not have any business raising his finger at the BJP (presumably over the Rafale deal) when he himself have been involved in corruption. "What did you want to be? A defence dealer or a politician?" Jaitley said, asking how he would like to be judged now.

PM Modi's higher overall reach also is on account of a larger number of tweets. Since 10th March, Modi has tweeted 654 times (excluding retweets) - the highest among all leaders. 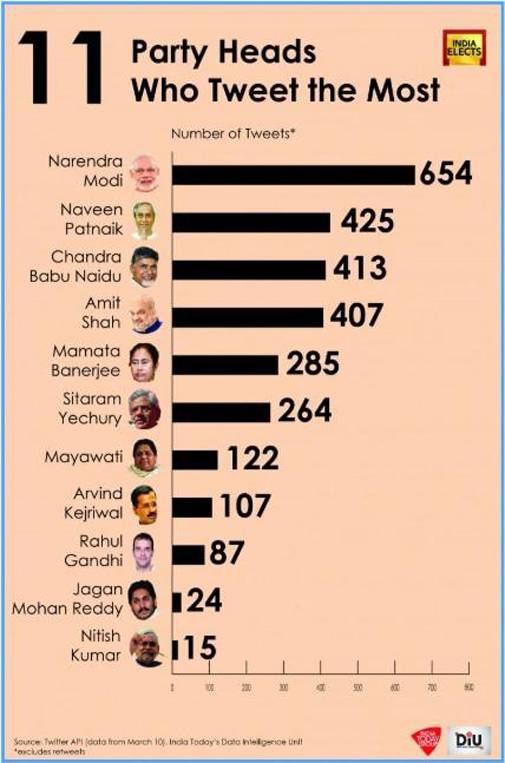 Jaitley in a press conference said, "It's story of a man who aspired to be a defence deal pusher & today aspires to be India's PM. It's a serious charge and I think it's my responsibility to make good discharge."

3:46 pm: Prime Minister Narendra Modi Saturday accused his rival parties of indulging in vote bank politics during a rally in Basti and said they consider even a "human being just a number". Addressing an election rally in Basti, he also said the Congress and its 'mahamilawati' associates do not want a stable and durable government. 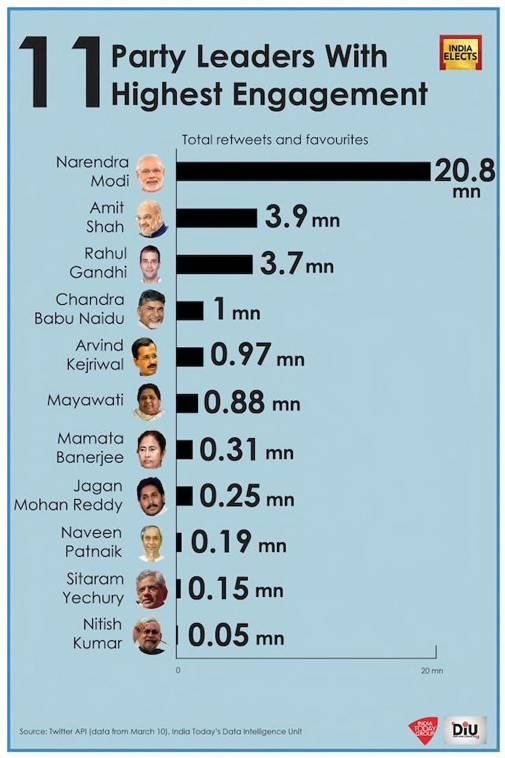 "By abusing me he has directly insulted ppl of 'purvanchal' & the same ppl will now show him what are the consequences of it," says Tiwari.

2.45 pm: Akhilesh Yadav slams BJP during rally in Barabanki, UP 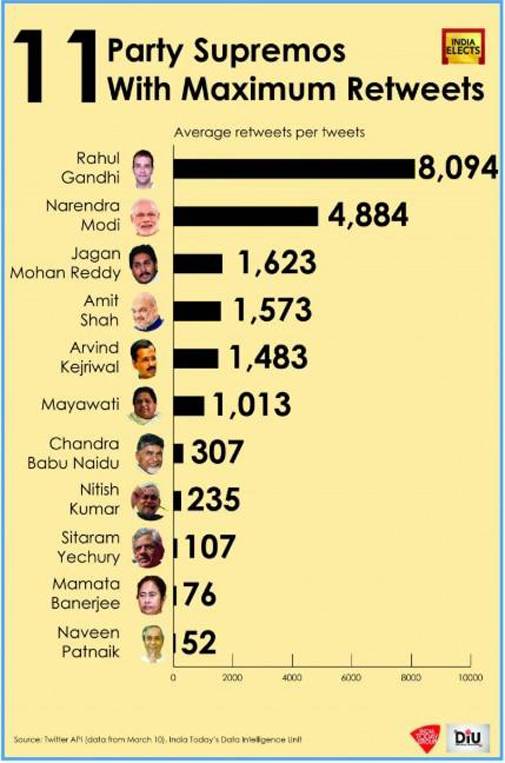 "Congress leaders happily sharing stage with Samajwadi Party in rallies,these people have betrayed Behenji so cunningly that even she is not able to comprehend. Party which was staking claim to PM post before 1st round of voting now admits to being a vote cutter," says PM Modi during a public rally in Pratapgarh, UP

"Manoj Tiwari dances very well, Dilip Pandey (AAP's North-East Delhi candidate) doesn't know how to dance, he only knows how to work. This time vote for the one who works, not the one who dances," says Delhi Chief Minister and Aam Aadmi Party (AAP) leader Arvind Kejriwal, hitting out at BJP candidate Manoj Tiwari from North East Delhi.

"With Rahul Gandhi's Midas Touch, no deal is too much. When he has a say, his business partners make hay. Doesn't matter if India suffers on the way." Shah tweeted.

With Rahul Gandhi's Midas Touch, no deal is too much!

When he has a say, his business partners make hay. Doesn't matter if India suffers on the way!#StealLikeRagahttps://t.co/rb9H6QOVwx

10.00 am: Rahul Gandhi hits out at PM Modi at press conference.

On Unemployment Issue: "The biggest issue right now is unemployment and the way Modi ji has destroyed the economy. Country is asking that Modi ji you promised us 2 crore jobs,what about that? He doesn't speak a word on jobs or farmers as he has nothing to say," says Congress President Rahul Gandhi.

On Surgical Strikes on Pakistan: "The Army, Air Force or Navy are not personal properties of Narendra Modi ji like he thinks. When he says that surgical strikes during UPA were done in video games then he is not insulting Congress but the Army," says Rahul.

On Chowkidar Chor hai jibe: "Process is going on in Supreme Court and I made a comment attributed to SC so I apologized. I did not apologize to BJP or Modi ji. 'Chowkidar Chor hai' will remain our slogan," says Rahul.

On UN ban on Masood Azhar: "Strictest of actions should be taken against Masood Azhar, but who sent him back to Pakistan? Who bowed down to terror and released him? Not the Congress, but it was the BJP Govt," says Rahul.

On BJP Chief Amit Shah's allegation that Rahul's former business partner got defence offset contract during UPA: "Please undertake any investigation you want, do any inquiry you want, I am ready as I know I have not done anything wrong, but please also investigate Rafale," says Rahul.

On PM Modi: "Five years ago, it was said that Modi ji will rule for 10-15 years, that he is invincible. Congress party has demolished Narendra Modi ji, it is a hollow structure and in 10- 20 days, it will come crumbling down," says Rahul.

9: 05 am: GREEN CAP FOR NARENDRA MODI: HIGHEST NUMBER OF FOLLOWERS

With over 47 million followers, Prime Minister Narendra Modi is far ahead than any other leader. "Spoke to Odisha CM Naveen Patnaik Ji and discussed the situation prevailing due to Cyclone Fani. Assured continuous support from the Central Government in the wake of the cyclone. The entire nation stands in solidarity with all those affected by the cyclone in different parts," PM Modi tweeted.

Spoke to Odisha CM Naveen Patnaik Ji and discussed the situation prevailing due to Cyclone Fani. Assured continuous support from the Central Government in the wake of the cyclone.

The entire nation stands in solidarity with all those affected by the cyclone in different parts.

8.30 am: Poll campaigns across parties have been rescheduled in Basirhat, Jaynagar, Diamond Harbour, Medinipur, Ghatal, Howrah, Hooghly, Kanthi, Tamluk Lok Sabha constituency which are either adjacent to Odisha or close to the sea, IANS reports.